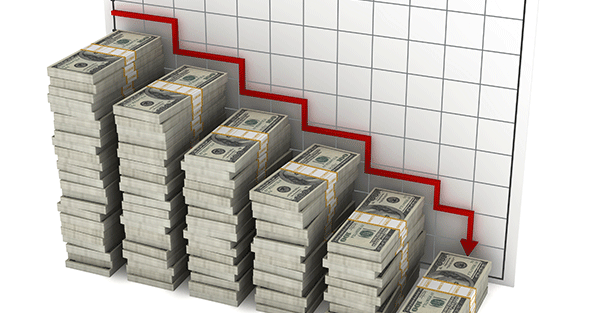 “Prosperity is like a Jenga tower. Take one piece out and the whole thing can fall.”

That’s a direct quote from John Williams, the President of the San Francisco Federal Reserve Bank in a speech he gave a few weeks ago.

He could have just as easily been talking about propaganda. The Fed, the White House, Wall Street, the media have a vested interest in peddling a certain narrative about the economy.

The narrative goes something like this: “Everything’s awesome. Stop asking questions”.

But if you look at their own data, the numbers tell a different story.

My team and I were recently studying US manufacturing indices, something that has traditionally been a strong indicator of recession.

This is data collected by the Federal Reserve; they survey manufacturing businesses and ask if factory orders are growing, shrinking, or relatively unchanged.

You’d think that based on this “everything is awesome” narrative that all the numbers would be growing.

And yet, much of the data show that manufacturing is shrinking. Or to be even more clear, that the US is in a manufacturing recession.

In Texas, for example, just 4% of businesses report that they are growing. 38% are shrinking.

The Philadelphia Fed’s Manufacturing Index has been in recession since September of last year.

The New York Fed’s Empire State Manufacturing Index was at minus 16.6 for February. In fact, the last time the index was below -15 was in October 2008, ten months into the Great Recession.

The numbers are all pretty clear: there’s an obvious industrial and manufacturing downturn.

But that shouldn’t matter because Fox News, CNN, CNBC, and the White House tell us that consumer spending drives the US economy; industrial production is irrelevant.

They run headlines like “RETAIL SALES RISE MORE THAN EXPECTED” as part of the good news narrative.

This sounds mysteriously like “FEWER PEOPLE KILLED BY POLICE THAN EXPECTED” or “FEWER AIRLINES DECLARE BANKRUPTCY THAN EXPECTED”.

But the reality is that prosperity isn’t a Jenga puzzle. It’s quite simple. You have to produce more than you consume.

Strangely, though, the financial establishment cheers when consumption is up. And they totally ignore the data when production is down.

This is the exact opposite of prosperity.

And no surprise, if you look at the long-term data you’ll see that a manufacturing downturn (i.e. less production) almost invariably precedes a recession.

More importantly, out of the 17 recessions over the last century, the longest period between them was about 10 years.

The average time between recessions at just about 68 months.

Bottom line– the economy is due for a recession. And the indicators suggest that one may already be in the works.

The bigger challenge is that both the Federal Reserve and the Federal Government are out of ammo.

The US government spent trillions fighting the last recession back in 2008.

But back then the US government debt level was “only” $9.5 trillion, so they could theoretically afford the bailouts.

Today government debt exceeds $19 trillion, well in excess of 100% of GDP. They don’t have the ability to bail anyone out, including themselves.

The Fed doesn’t have any room either. On average, the Fed cuts interest rates by 3.5% in a recession. And the smallest interest rate cut in any recession during the last 60 years was 2%.

Today, interest rates are at 0.25%… next to nothing. They’ve been at near-zero levels since the last recession.

That means that even if the next (i.e. current) recession is extremely mild and the Fed cuts by only 2%, interest rates are practically guaranteed to go below zero.

And from there, it’s a very short road to capital controls.

Capital controls are a policy tool used by desperate governments to keep money trapped in a failing financial system.

Think about it—when rates turn negative, who in his/her right mind would keep money in a savings account that’s going to charge YOU interest for the privilege of letting a banker gamble your funds away on the latest investment fad?

A rational person would close his/her account. Or at least maintain a minimal balance and hold cash.

But if too many people take their money out of the banks, then the entire system collapses.

And governments have shown they will do whatever it takes to prevent this from happening… even if it means restricting what you can/cannot do with your own savings.

We’re already seeing bank withdrawal restrictions in Europe, as well as loud calls to ban cash on both sides of the Atlantic.

Even if all the data is wrong and there’s never another recession again until the end of time, you won’t be worse off for having a Plan B that protects your family, your savings, and your livelihood from such obvious risks.