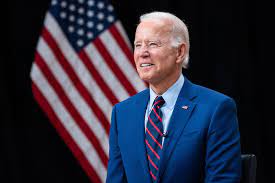 I prophesied in September 2021 that Biden would get tossed out of office like an old casserole within a year, on account of his freefalling approval ratings and dementia that becomes more apparent by the day.

We’ve got about 160 days left for my prediction to bear fruit. I stand by that timeline, for reasons I’ll explain.

I’m not merely bashing a geriatric vegetable recklessly put in charge of the nuclear launch button as a last-ditch effort to preserve the uniparty corporatocracy.

Rather, the travesty that is Biden’s fledgling presidency has existential implications for the state of US “democracy.”

First of all, Biden is the president on paper only. He runs nothing, not even his own public appearances.

Pick a press conference at random from Biden’s year-plus time in office, (on the rare occasion that his handlers prop him up in front of the camera for public scrutiny), and note that Biden is almost guaranteed — virtually on every occasion he’s allowed to speak using pre-written, ultra-brief, bullet-point talking points (likely the most he could reliably rattle off) – to at some point stammer out some variation of the phrase “I’m not allowed to say that/I shouldn’t say that.”

Under what rationale could a president who constantly alludes to the control exercised over his speech by unseen forces be considered “in charge”?

What does that say about the state of “democracy”? 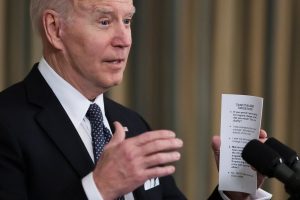 Above: Biden’s notecards serve as reminders from his handlers, being prone to forgetfulness as he is, that when he goes off-script, he’ll have hell to pay backstage.

Imagine the beating he took when he fudged his talking points three times in a row in a handful of days during his big-league “wartime president” performance on the international stage!

Biden's foreign trip has been a complete disaster.

Biden called for regime change in Russia, said U.S. troops were being sent to Ukraine, and suggested he would use chemical weapons against Putin.

His staff had to correct him each time. pic.twitter.com/FUfgcA5EGn

Voter confidence in Biden depletes by the day. 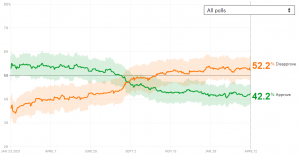 The inevitable question becomes, then: who is the president? Who is steering the ship? Who’s the watcher on the wall after Biden’s 7 pm bedtime?

Here’s one possible answer, gleaned from Obama’s masturbatory celebration of his 2009 Obamacare act (because the democrats are so sad the last time they won a rhetorical victory with a semi-popular initiative happened 13 years ago):

Take in the scene: democrat party sycophants claw at Obama, suckling at the power teat, like Justin Bieber fangirls while Biden – the purported president of the United States — stares at the wall, shoulders hunched, alone on the stage.

Obama is the warm light of the neoliberal world.

Of course, Obama is neither the true head of the executive branch – in the sense that his personal governing philosophy is executed. Rather, he is the administrative custodian of the empire, not the emperor himself, more entrusted with such stewardship than Biden both because he is legitimately popular with a large portion of the base and because he’s not senile.

With the “president’s” true function as Deep State trustee in mind, Obamacare, or the “Affordable Care Act” as it was dubbed in Orwellian fashion — a sick kind of joke they like to play with legislation that does the exact opposite of what its name implies, as was the case with the PATRIOT Act, etc. – was purely a giveaway to the corporate state.

The ACA did not, in fact, provide affordable government medical care to everyone.

Instead, ACA inscribed into law a mandate that forced people to buy substandard private insurance programs from multinational corporations (the same ones that funded Obama’s campaign) or face tax penalties.

The ACA was only “progressive” in the sense of expediting the upward transfer of wealth to the technocrat class – the true aim of the DC uniparty’s donors/owners. That’s what they bankroll politicians’ campaigns for. 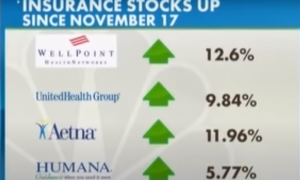 Shock poll: proof the corporate media rigged the 2020 election for Biden via censorship

At The Daily Bell, we previously discussed the Hunter Biden laptop fiasco, which was heavily censored on corporate and social media in the run-up to Election Day 2020.

Voters now confirm that they would have selected differently had they been allowed knowledge of Biden’s massive corruption, as revealed by the now-acknowledged-to-be-real contents of his crackhead son’s laptop.

Accordingly, it’s not hyperbolic to claim that the corporate media literally rigged the 2020 election, and that it was neither free nor fair.

“The survey results report that 17 percent of Biden voters would not have voted for the Biden-Harris presidential ticket if they had known about at least one of the eight news stories that were suppressed by big tech and mainstream media outlets [including the Hunter Biden laptop story].”

What remedy does the corporate state have for a looming 2022 midterm trouncing?

Biden only won the nomination in the first place back in early 2020 because the corporate democrats scrambled in the late stages of the primary to coalesce around an establishment candidate in a last-ditch effort to prevent a Bernie Sanders nomination.

In such a scenario, Sanders and Trump would each have represented the more unruly factions of each party’s respective base – rightfully perceived as a threat, however toothless, to the technocracy’s iron-fisted rule.

Biden never had a core base of supporters. Whatever scraps of popular support he ever enjoyed recede daily. He is an albatross around the neck of the DNC establishment.

There is no way the technocrats are allowing free and fair midterm elections with Biden as the figurehead. The result would be guaranteed electoral slaughter, the likes of which American politics has never seen.

Or both. Probably both.

The only real reason they haven’t replaced Biden already is that the next-in-line is a cackling hyena with even worse polling numbers than him.