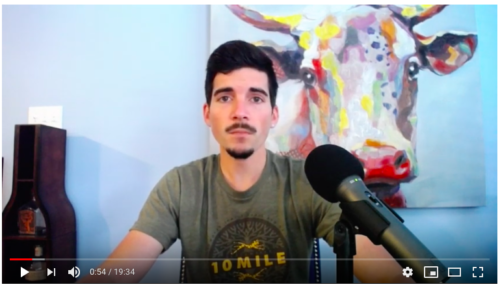 Nobody is faking these disorders. Many students have very real attention deficits when it comes to the material schools want them to pay attention to. Kids have very real hyperactivity that has no outlet when they are forced to sit in a classroom all day.

But that doesn’t mean they have a disorder. It just means they learn differently. And instead of telling them there is something wrong with them, they should be given the freedom to pursue alternative education styles.

Some kids have attention deficits. Some kids are hyperactive. But they do not have disorders. The school system has the disorder.

And it is the school system that needs changing, not the individuals being diagnosed.

I recorded a video to talk about some feedback I got from a post I wrote in February called Proof that ADHD is a fake disease.

A woman reached out with this feedback:

I recently saw your article on how ADHD is “fake”. I’m not reaching out to you to bash you, but to inform you. Since you’re in journalism, I feel like you must do your research before writing on any certain subject.

My son, who is almost 19 years old now was diagnosed with ADHD when he was in kindergarten. ADHD is a very real learning disability that you can just pretend it’s not there or discipline away the problems. Kids with ADHD learn differently. Just like kids with dyslexia, or autism. However if a child is diagnosed with dyslexia or autism, no one tells you your child has a fake disability.

My son as well as my niece has explained it as trying to listen or focus on one thing but you have 100 other things going on in your head. I’ve seen my son struggle through school from kindergarten all the way through to his senior year. I’ve seen him stress because he thinks he’s stupid because it takes him a little longer to complete his work, I’ve seen him cry because it’s so hard to stay on task when you’re mind is going 100 miles a minute. I’ve seen teachers give up on him because they think he’s just not trying.

And it’s not just the ADD part but the Hyperactive part too. Now since my son is older, he has learned to control that part, but when he was in elementary school it was hard for him to stay still. He couldn’t process it like most kids. He would get in trouble at school because of all of his nervous energy. As he got older he learned to control the hyperactive part of ADHD.

I struggle making the decision to put my son on medication at 5 years old. I loved his spirit and didn’t want to mask it with medication, but I had to do something or the school would have expelled him from kindergarten, yes expell from K-5. Once I came to terms with putting him on medication and after finding one that worked for my son his grades started to come up and he stopped getting in trouble. I chose not to give him his medication on weekends and in the summers because I strongly believe in letting them be themselves as well as I believe ADHD stunts growth.

I used sports to help him have an outlet to burn off energy. He found his passion in football.

My son graduated high school this past June with honors and is currently playing attending The Citadel Military College and playing football for them and majoring in Education. I raised him to not be defined or defeated by a learning disability, but to use it the best he can.

As a college student, he still needs his medication. ADHD doesn’t just go away. I do think he has ADD now, not the hyperactivity only because he learned to control that part of the disability.

So, I said all this to say, ADD/ADHD is very real and for you to publish an article that says it’s not is just sad! I would guarantee you would not write an article like that about dyslexia. Or what about disabilities you can’t see, like back pain, fibromyalgia, migraines. Those all require medication. Are people that struggle with those problems, are they faking it too?

Thanks for taking the time to reach out to me, and I am sorry if my article offended you.

I’d like to point out that I never said I believe people with ADD or ADHD are faking it. My point has always been that it is wrong to diagnose these people with an illness.

Yes, some people have attention deficits in some areas, and when expected to do certain tasks. But that does not mean they have a disorder.

All it means is that society thinks these people should conform their learning, thinking, and doing styles to the majority.

And I think your case proves this point. You said:

“I struggle making the decision to put my son on medication at 5 years old. I loved his spirit and didn’t want to mask it with medication, but I had to do something or the school would have expelled him from kindergarten, yes expell from K-5.”

THE SCHOOL would have expelled him. They said that he had a disorder because he wasn’t conforming to how public school children should act.

The school system has the disorder, not your son.

My point is that there should be other options and paths open to kids who don’t conform to the typical style of learning. This is a better option than medication, in my opinion, which as you said can rob a child of their creativity and passion.

He can’t sit still in elementary school? Well maybe he shouldn’t have to.

Not all kids learn the same way. Convienience for the school should not take precedent over individual needs.

Worse, a diagnosis for ADD can be a self fulfilling prophecy. You said:

“I’ve seen my son struggle through school from kindergarten all the way through to his senior year. I’ve seen him stress because he thinks he’s stupid because it takes him a little longer to complete his work, I’ve seen him cry because it’s so hard to stay on task when you’re mind is going 100 miles a minute. I’ve seen teachers give up on him because they think he’s just not trying.”

That is very sad to me that the public school system made him feel this way by convincing him that he had a disorder.

Calling it a disorder made your son feel like HE was the broken one. The truth is that the education system is broken.

Had he been given altnernative schooling options, or simply the freedom to do what he wanted with his time, he would not have felt like he was dumb, simply because he wasn’t good at what the schools want him to be good at: tests, sitting still, being quiet, taking orders, regurgitating facts, etc.

And when I hear stories like yours, I know it is all the more important to talk about the alternatives, so that kids can be themselves without being forced into a one size fits all education factory.

It sounds like your son would have been a perfect candidate for a Mentessori style or other less restrictive learning environment.

It’s great to hear he found his outlet in sports. Perhaps what he, like many other children, needed was simply to be allowed to play until he reached the age where he wanted to sit still to study what interested him.

Play is the natural way to learn afterall, and I worry what we take away from children with so much restriction.

I believe the focus for education should be on the individual. Everyone is different, and should not be expected to learn in the same exact way.

And yes, I will continue to say it is wrong to tell these perfectly healthy, but wonderfully unique children that they have disorders.

Again, I know he is NOT faking anything, and I know he truly does have an attention deficit for the particular tasks that schools want from him. All I am saying is that this does not constitute a “disorder.”

I hope that you can see that the last thing I would want is to make anyone who has been diagnosed with ADD or ADHD feel bad.

In fact I am saying the exact opposite, that the system is to blame for their troubles, and they shouldn’t let the diagnosis lower their self esteem.

They should not feel bad, they should feel free to throw off the cookie cutter system, and flourish as the unique individuals they are. They should do it their own way, that respects them as a free individual.

And I believe that is possible to give kids and teens back the freedom they deserve.

It starts with being willing to question the everyday assumptions we go through life with, and look at things from another perspective.

It’s not your child that has a disorder, it is the education system.

Again, thank you for taking the time to reach out, and I wish you and your family the best.

And she replied back:

Thank you for replying to me.

You do make many valid points, but unfortunately, we will have to agree to disagree. It wasn’t the school that diagnosed him. He went through testing before I made the decision to medicate. He was diagnosed by doctors. As for alternative classes for kids who learn differently, well public schools don’t offer that and as a single parent I couldn’t afford anything else. Even if public schools offered alternative learning classes that opens the door to so many social issues.

I don’t know if you have children, but if you don’t, I truly hope you never have to deal with a child with a learning disability or any kind of problem. It will rip your heart out watching them struggle.

Again, thank you for taking the time to respond.

Proof that ADHD is a Fake Disease

Why You Should Forget School and Let Kids Play

6 Creative Ways to Homeschool While Continuing to Work

7 Reasons to Shut Down Public Schools Immediately and Permanently