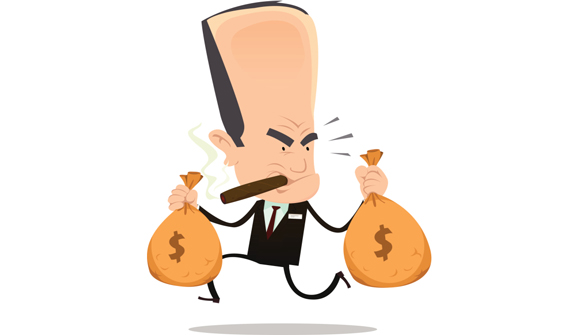 How Eric Holder Failed the Economy … Attorney General Eric Holder, who plans to step down after more than five years in office, has efforts and achievements to be proud of, no doubt, but will probably be remembered above all for something he didn't do: prosecute top executives for their role in the 2008 financial crisis. – Bloomberg editorial

Dominant Social Theme: One of the hallmarks of a fair society is the number of Wall Street crooks it prosecutes. Prosecute away!

Free-Market Analysis: It's fairly predictable now. A Wall Street transgression is noted and trumpeted and the call goes out for prosecutions. Often the rhetoric is accompanied by demands for additional regulatory rigor and perhaps a whole new strata of regulatory oversight.

It's really a meme of sorts; the latest trigger is a tape of conversations between Goldman Sachs and New York Federal Reserve officials that seemed to indicate collusion to minimize some Goldman Sachs wrongdoings.

We wrote about it here:

Our editorial made the point that what was needed was less government interference in the marketplace, not more … and as a market-oriented publication, we thought that was reasonable. Meanwhile, the constant calls for "prosecutions" and "justice" often make it difficult to see what's actually gone wrong and how ingrained the wrongness is.

The problems of economic and social justice are surely ingrained in the fabric of Western society. They take the form of basic judicial decisions that have given rise to monopoly central banking and a dangerous multinational corporate sprawl.

You will rarely if ever see these foundational elements of modern business and society discussed in the mainstream press, and often not in the alternative press, either. The system under which most live and work is seemingly held above ordinary scrutiny. It is granted an unquestioning existence, like, say … the atmosphere.

But what if people do at some point begin to question foundational elements of modern society? We would argue those who have the most to gain from the continuance of fundamental sociopolitical and economic mechanisms are increasingly uneasy about the possibility of a protracted debate on just these issues.

This is one reason, it seems to us, for the widespread reporting on the Goldman Sachs tapes and the malfeasance they present. Certainly, there is no denying the tapes and their contents have received extraordinarily wide play from a variety of mainstream media sources

[Holder] declined to hold senior executives accountable not because he wished to be soft on financial crime but because of a strategic error. In a 1999 memorandum, written when he was deputy attorney general under President Bill Clinton, he'd explained how prosecutors could charge corporations as criminal enterprises.

In 2002, the testing of that doctrine on Enron Corp. auditor Arthur Andersen LLP caused the company to fold, and thousands of innocent people lost their jobs. During and after the financial crisis, Holder kept the focus on corporations, but moved more cautiously.

Fearing a repeat of the Arthur Andersen debacle, prosecutors were careful to leave companies standing, even as they extracted tens of billions of dollars from banks for transgressions ranging from mortgage-related fraud to laundering money for drug cartels. "Some of these institutions have become too large," Holder famously said in 2013 Senate testimony. "It has an inhibiting impact on our ability to bring resolutions that I think would be more appropriate."

The inhibition was understandable. Yet it arose because, under Holder's leadership, prosecutors lost sight of what mattered most: holding individuals, not companies, accountable for crimes. Of 21 separate actions against major financial companies from 2009 through May 2014, only eight were accompanied by charges against individuals, and none of them were high-level executives.

The authors of any offenses related to the 2008 financial crisis can relax: In most of the cases, the statute of limitations now applies. Could it be that nobody went to prison because no crimes were committed? This seems unlikely, at the very least.

As we've noted before, more than 1,000 people were charged after the savings-and-loan bust of the 1980s, and more than 100 company officers and directors served prison terms. The accounting and other corporate scandals of the early 2000s led to criminal charges against at least 30 top-level executives, most of whom were convicted or pleaded guilty.

Failing to pursue individuals has sent executives the message that if they commit crimes, the worst that can happen is they'll lose their jobs and shareholders will have to pay up. This undermines the finance industry, and capitalism more broadly, by supporting the perception that Wall Street is a den of iniquity whose leaders operate with impunity. It fuels contempt for the country's politicians and the rule of law as well — suggesting that the former are for hire and that the latter is a sham. Holder's successor should strive to put this right.

The editorial goes on to suggest that prosecutors charge individuals not just companies with crimes; judicial agreements that seek to resolve cases without prosecutions ought to be eliminated; finally, any prosecutorial agreements ought to be reviewed by judges who can then decide if such agreements "serve the public interest."

Such suggestions build on resentment generated – at the moment – by the tapes. But isn't it more of the same? Revelations of wrongdoing are not used to illuminate fundamental socio-economic failures but are used to whip up hysteria and class resentment.

Those performing this manipulation are inevitably those who want to continue with business-as-usual – and indeed, expand that sort of business. This globalist mentality is actually quite satisfied with the status quo; they are determined that individuals should be held accountable for larger systemic ills.

There's no doubt the system is corrupt and is yielding bad outcomes. There's no doubt individual players are corrupted as well. How could it be otherwise? Unfortunately, over and over again we see efforts being made to focus on the individuals rather than larger elements of corruption.

We can see it in what we call the "Wall Street Party" – which is increasingly a kind of international financial fiesta. Central banks around the world are inflating in concert and boldly manipulating markets – manipulations that would be criminal for private firms to do.

We don't know how long the current Wall Street mania is going to last. In fact, October, upcoming, is perhaps the most dangerous month of all when it comes to market corrections. But if markets survive the fall, they may continue to run next year – and savvy investors will take profits as they can for as long as they can while keeping in mind the risks they take.

Eventually, there will be a significant downturn, a major crash. At that point, the cry for individual prosecutions of crooks will rise up again – probably in concert with demands for a more fully globalized financial system that will be "safer" even though it will be the same as before, only bigger.

When this happens, and almost inevitably it will, we should keep in mind that the system itself is mortally flawed. And when the call goes up for select prosecutions, we should try to remember that the real "crooks" are often not the ones the system intends to provide.