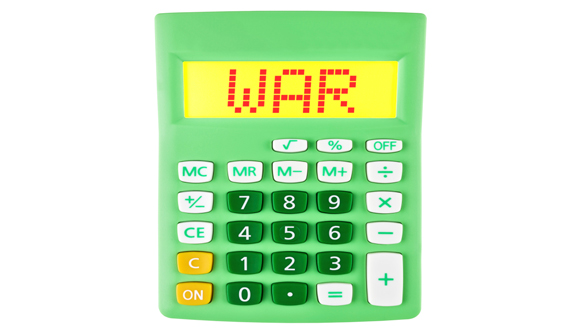 STAFF NEWS & ANALYSIS
War on Terror's Economic and Mortality Costs Have Yet to Be Tallied
By Staff News & Analysis - March 31, 2015

Free-Market Analysis: It is important to keep track of the war on terror and its damages. A big war creates immense antipathy among those subject to its destruction … Trade suffers; blowback occurs. And for the US, such a war can be economically draining far beyond what is now being reported.

This is not really taken into account in the economic analyses purveyed across the airwaves and in mainstream electronic and print publications.

But it is important to keep the scope of US-led wars in mind when contemplating the possibility of an ongoing US recovery and its avoidance of significant price inflation.

In the 1970s, the costs of the Vietnam War helped sink the dollar's gold back and turned it into a fiat currency driven by oil. At the same time price inflation began to simmer: Toward the end of the decade and then into the 1980s, the Fed was forced to boost rates near 20 percent.

One doesn't ordinarily think of the "war on terror" as having a wide scope, and yet as this report shows, the damages are quite a bit more extensive than one might have expected.

In a joint report— Body Count: Casualty Figures after 10 Years of the 'War on Terror—Physicians for Social Responsibility, Physicians for Global Survival, and the Nobel Prize-winning International Physicians for the Prevention of Nuclear War concluded that this number is staggering, with at least 1.3 million lives lost in Iraq, Afghanistan, and Pakistan alone since the onset of the war following September 11, 2001.

However, the report notes, this is a conservative estimate, and the total number killed in the three countries "could also be in excess of 2 million, whereas a figure below 1 million is extremely unlikely." Furthermore, the researchers do not look at other countries targeted by U.S.-led war, including Yemen, Somalia, Libya, Syria, and beyond.

Even still, the report states the figure "is approximately 10 times greater than that of which the public, experts and decision makers are aware of and propagated by the media and major NGOs.

How much greater would be the casualty count if the figures included Yemen, Somalia, Libya, Syria, etc.? One can make a case that the bloodletting in the Ivory Coast is in some sense a consequence of the war on terror. And also the destabilization of Mali and the continued conflict in the now-bifurcated Sudan.

This is truly a pan-African war – as we have reported in the past – and people don't realize that a region of the world as large or larger than the continental US is in the grip of incipient and ongoing violence.

At the height of fighting in Afghanistan, the US reportedly fielded some 150,000 troops. Presumably the supply chain to support those troops was five or ten times that number – and thus could have amounted to millions, all told.

None of this has been really explained in the mainstream media, or not in forceful or regular ways. Unlike the Vietnam War, the pressure on authorities to clearly and succinctly explain the costs of war has been lacking.

In part, this is due to the way these serial wars have been prosecuted. In each instance, the number of US troops and their involvement is downplayed. Mercenaries – contractors – have been deployed aggressively. Local warlords and regional troops have been employed as well.

All of this maneuvering has allowed the Pentagon to declare fairly minute numbers of casualties considering the vast regions involved and the length of time that hostilities have covered.

Supposedly, US casualties in Iraq and Afghanistan totaled around 7,000 but this figure doesn't take into account US proxy fighters including Afghan and Iraqi troops.

Estimates are that in Iraq alone some one million died and probably many more were wounded. That includes civilians, of course. The effects of US depleted uranium weapons are so severe, according to certain reports, that Iraqi women in various parts of the country have been advised not to have children because of the high likelihood of birth defects.

In Iraq, at least 1 million lives have been lost during and since 2003, a figure that accounts for five percent of the nation's total population. This does not include deaths among the estimated 3 million Iraqi refugees, many of whom were subject to dangerous conditions during this past winter.

The costs of all this war and bloodshed are percolating through Western economies right now. While the Fed continues to maintain that price inflation is relatively tame, the weakness of the recovery itself in Europe and the US likely provides yet more evidence of the damage that the incessant fighting has caused.

Misallocation of resources, destruction of vast amounts of equipment and, of course, the ongoing costs of tending to the many veterans who have returned with significant physical and psychological damage are certainly bound to be factors that must prey on Western and especially US economies.

This doesn't include the costs of the US's internal militarization and authoritarian centralization. The damage to startups and entrepreneurial ventures is probably significant as well, as the US seems to head more and more toward a war footing.

When analyzing current economic conditions or future prospects, the immense and yet little-understood costs of the war on terror ought to be considered by judicious analysts and investors.