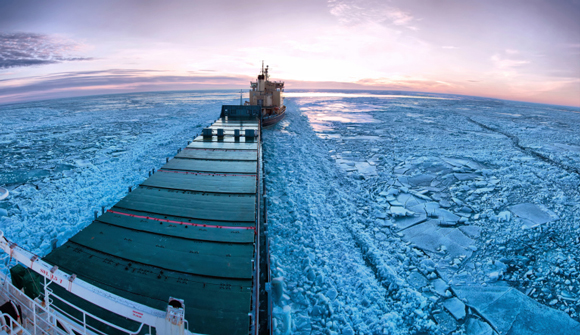 Global warming scientists forced to admit defeat… because of too much ice: Stranded Antarctic ship's crew will be rescued by helicopter … Chris Turney, a climate scientist and leader of the expedition, was going to document 'environmental changes' at the pole … In an interview he said he expected melting ice to play a part in expedition … MV Akademik Schokalskiy still stuck among thick ice sheet 1,500 nautical miles south of Hobart, the Tasmanian capital … Called for help at 5am Christmas morning after becoming submerged in ice. – UK Daily Mail

Dominant Social Theme: An accident is not a trend. Global warming exists, for sure.

Free-Market Analysis: So a number of prominent warmists set sail on an icebreaker ship to check on the thinning of the Antarctic ice cap. What they discovered was that the ice was actually thicker than expected.

And then they got stuck.

If these warmists were in search of the perfect headline to convince credulous masses that global warming was thinning both the North and South Pole, they miscalculated. They created a headline nonetheless, but surely not the one they wanted.

The vision of so many top warmists stranded on a ship, stuck amidst the icebergs they swore were thinning, provides skeptics with an ironic episode that rarely presents itself.

Here's how the Daily Mail reports on it:

They went in search evidence of the world's melting ice caps, but instead a team of climate scientists have been forced to abandon their mission … because the Antarctic ice is thicker than usual at this time of year.

The scientists have been stuck aboard the stricken MV Akademik Schokalskiy since Christmas Day, with repeated sea rescue attempts being abandoned as icebreaking ships failed to reach them.

Now that effort has been ditched, with experts admitting the ice is just too thick. Instead the crew have built an icy helipad, with plans afoot to rescue the 74-strong team by helicopter.

The expedition is being lead by Chris Turney, a climate scientist, who was hoping to reach the base camp of Douglas Mawson, one of the most famous Antarctic explorers, and repeat observations done by him in 1912 to see what impact climate change had made.

It is thought that the group, which includes scientific researchers and a journalist, will now be able to escape by air after two sea rescues failed.

Australian icebreaker Aurora Australis was unable to reach them because it was not strong enough to break through. A top-of-the-range Chinese icebreaker, the Snow Dragon ('Xue Long'), was deployed earlier in the week, and hoped to reach the ship by Saturday. However just after midnight on Friday it too got stuck just six nautical miles from the ship.

… Blizzards could hamper the rescue mission, but the ship is well-stocked and the scientists are continuing their research on the snow around them But on Friday the heavy winds became too great, and built up an impenetrable pile of snow.

They are also continuing their research while stranded by testing the temperature of the surrounding ice sheets. A spokesman for Australia's Maritime Safety Authority told Australia's Associated Press: 'It is quite a remote part of the world, but we have everyone safe. The vessel isn't in any immediate danger.'

The spokesman said the ship was visiting a number of sites along the edge of Antarctica. One has managed to send a tweet. Chris Turney, of the Australasian Antarctic Expedition, wrote: 'Heavy ice. Beautiful; light wind. Only -1degC. All well. Merry Xmas everyone from AAE.'

Note this last point. "Only 1degC." These people just don't give up! If we are reading this tweet correctly, Turney is commenting on the mildness of the weather while sitting amidst thicker-than-expected ice flows that have already captured his ship …

Being a proponent of a dominant social theme can be a lucrative exercise, indeed. Also, there is a built-in old boy's network to take care of you. At the top, it is all lubricated by bankers' money derived from evident control over central banking.

The torrents of money produced by such banking has been used to bankroll an increased level of globalism and globalist enterprises. It is predicated at least in part on fear-based promotions, scarcity memes intended to panic individuals into giving up power and wealth to specially prepared globalist institutions like the UN, IMF, World Bank, etc.

Global warming is a basic dominant social theme of the elite, in that it is a promotion on which others are predicated. Global warming – climate change, etc. – is intended to provide the justification for such oddities as smart meters and carbon capture. Basically, this theme gives rise to a vast panorama of authoritarian legislation and Draconian enforcement.

Once the idea of manmade global warming/climate change is accepted, the ramifications are endless. Almost any law can be justified under the idea that the planet itself is at risk due to human behavior. And almost behavior-altering tax or fine can be justified as well.

Popular acceptance of global warming is a prelude to the application of deep fascism. The meme introduces the endlessly regnant state. No wonder the elites are so keen on establishing it – even though "it" presumably doesn't exist.

Still, they proceed with their endless UN conferences, presentations of meaningless papers, fiddled statistics, endlessly repeated falsehoods that travel around the world and show clearly the nature and content of the cooperative ecosystem.

Lying liars lie. And now, finally, they are on the cusp of their biggest caper. Having built up stock markets, especially the US stock market, to empyrean highs via excessive money printing and relaxed regulations, they have managed to jam the IPO pipeline with various kinds of "green" solutions, often partaking of the global warming promotion.

They are making a final push – as part of the Wall Street Party we've diagnosed – to fund a slew of warmist industries and facilities with the public's money. Presumably, this sort of funding adds credibility to what is being created.

If it can somehow be seen that the market process itself created various forms of green technology, then presumably their credibility is enhanced. Which leads us to a final point: There is money to be made with this meme and those who are cynical enough (or idealistic enough) to subscribe to it may gain revenue via professional or investment participation.

For many, however, there may be moral issues that preclude participation. This is an egregious elite meme with numerous authoritarian ramifications. But some will always continue to help elite forces promote it for a variety of reasons.

One could certainly say that global warmists are trapped amidst contradictory evidence. They are frozen in a sea of denial.