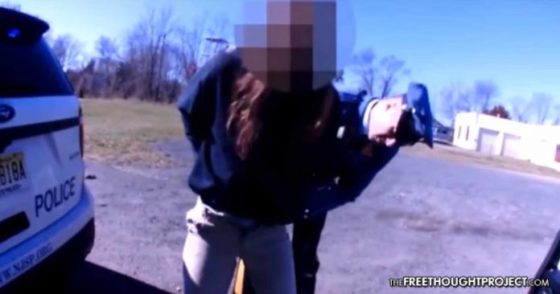 South Hampton, NJ — One of the most disturbing videos illustrating the horrors of marijuana prohibition was released this week showing police officers handcuff an innocent man and publicly grope his genitals and probe his anus. The lengths the police state will go to prosecute otherwise innocent people for this plant were on full display as two New Jersey state troopers detained a man then humiliated and sexually assaulted him for nearly ten minutes in broad daylight.

Highlighting the gross negligence associated with such a tyrannical and vile act — the public sexual assault of this innocent man turned up nothing. What’s more, the footage of the attack was hidden from public view and only discovered by accident.

The traffic stop took place on March 8, 2017, after police allegedly saw the driver of a vehicle, Jack Levine tailgating another vehicle. When the officers pulled him over, they claimed to have smelled marijuana and then used this as justification for the disgusting and horrific act that followed.

According to NJ 101.5, who first reported the video, it was published by open government advocate John Paff. He came across the case through happenstance — filing random public records requests, as he does across the state.

Paff told New Jersey 101.5 he became aware of the search after the driver filed a motion to extend the 90-day deadline for a tort notice — the notification a person must give a government agency before suing it in New Jersey Superior Court. He then filed records requests for dashcam and body cam videos, according to the report.

In the video published by Paff — from the perspective of Trooper Andrew Whitmore — Levine’s passenger, a coworker, is seen in the back of one troop car, and Levine in the other. Whitmore tells the passenger that “it’s not like TV” — that marijuana possession isn’t an offense that will land him in jail — and urges him to disclose where the pot the troopers say they smelled might be. But the passenger says it’s not his car, and he doesn’t have any marijuana.

As the video shows, once cops claimed to smell the weed, they used this as probable cause to detain Levine and his passenger and search the vehicle with no warrant.

After finding nothing in Levine’s pockets and the vehicle turning up empty as well, trooper Whitmore urged trooper Joseph Drew to turn their attention on this innocent man’s most private parts.

“… stashed it somewhere where we can’t just … physically can’t … it’s not in his pockets,” Whitmore says.

As we see in the video, this is when the nightmare begins.

“Am I free to go?” Levine asks before the sexual assault. “Not at this point, no” Whitmore tells him.

“Am I under arrest?”

“You’re under arrest for the odor of marijuana.”

“So now you can get arrested for somebody smelling something? What is that all about?” Levine says.

The officers tell Levine they might bring him back to their station for a strip search.

“If that’s you guys trying to scare me into telling on myself for something I didn’t even do wrong, then it’s not going to work,” he says.

Later in the video, Drew then pulls Levine aside and begins the search.

“If you think this is the worst thing I’m going to do to you right now, you have another thing coming my friend,” trooper Drew says as he searches the outside of Levine’s pants, premeditating the public sexual assault.

“Try not to rape me, already,” Levine says, halfway joking, not knowing that this was actually about to happen.

For several minutes, Drew proceeds to savagely poke, prod, and molest this innocent man as he finds nothing.

“Whoa, whoa, whoa,” screams Levine as the the trooper physically grabs his penis while violently ramming his fingers into the innocent man’s anus.

Drew then yells at Levine to stop squirming as he sexually assaults him — as if it is easy to sit passively by as an armed man who has kidnapped you on the side of the road attempts to sexually assault you in search of a plant.

At the end of the assault, the troopers then let Levine and his passenger go but not before they gave him a ticket for following too close.

The Free Thought Project contacted the New Jersey State Police who said they were aware of the video and were going to release a statement. TFTP has also confirmed that both troopers are currently on active duty.

“It was the most humiliating experience I’ve ever been through, also due to the fact people were driving by very slowly (sic), watching him with his hand down my pants,” Levine said.

Below is this graphic footage. Warning, it may be extremely disturbing to some viewers. When watching the video below, ask yourself who the real criminals are.

If you’d like to express your peaceful protest about this incident to the New Jersey State Police their information is below:

Contributed by Matt Agorist of thefreethoughtproject.com.

The Free Thought Project is dedicated to holding those who claim authority over our lives accountable.