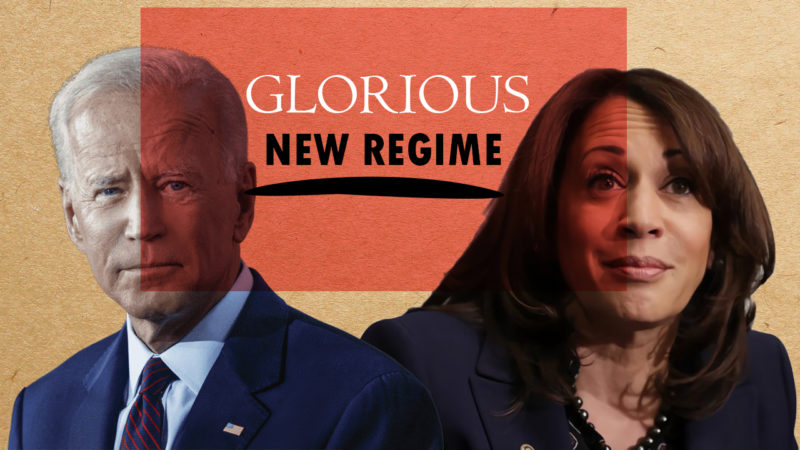 It’s all over everyone. You can go back to not paying attention any more. Crazy orange man is out of the Whitehouse, and banned from Twitter– he can’t hurt you anymore.

A new, glorious regime is now in power. The kids in cages have already been released, I’m sure– I don’t even have to check, I’m sure the President and Vice President took immediate action on such a pivotal campaign issue.

And now, they’re calling for unity. They want to bring the country together.

How will they do that?

Everyone’s favorite socialist, Alexandria Ocasio-Cortez asked, “Is anyone archiving these Trump sycophants for when they try to downplay or deny their complicity in the future?”

Robert Reich, Labor Secretary under Clinton, and adviser to Obama, Tweeted, “When this nightmare is over, we need a Truth and Reconciliation Commission [to] name every official, politician, executive and media mogul whose greed and cowardice enabled this catastrophe.”

The Biden admin is scooping up plenty of Clinton/ Obama leftovers, perhaps Reich himself will be appointed Chief Justice of the Truth and Reconciliation Committee. That would be the Third Reich… administration.

And the propaganda arm of the cabal agreed. Chris Hayes, an MSNBC host said, “The most humane and reasonable way to deal with all these people, if we survive this, is some kind of truth and reconciliation commission.”

Another cabal propagandist, Keith Olbermann, was even more extreme. Like a line from a bad dystopian movie, he said: “the terrorist Trump must be defeated, must be destroyed, must be devoured … and then he, and his enablers, and his supporters, and his collaborators … must be prosecuted and convicted and removed from our society.”

I’m not sure if he said it exactly like that, but I imagine that’s how he felt.

Dick Costolo, former CEO of Twitter, said, “Me-first capitalists … are going to be the first people lined up against the wall and shot in the revolution. I’ll happily provide video commentary.”

These people are out of their god-damn minds, and they call their opposition the crazy, violent ones!

Gee, I wonder why anyone would cling to their guns, or go so far as to storm the Capitol to try to prevent these people from taking power. Maybe because they are literally being told they will be rounded up and shot by the people taking power.

And Kamala Harris will be the perfect authoritarian to take her power to the extremes, as soon as Biden slips on a banana peel or whatever.

We could essentially see 12 years– almost 4 of Biden’s term then 8 years of her own– of a woman in power who laughed about sending parents to prison over truant children, who locked up non-violent drug offenders with a three strikes rules, who prosecuted an accused murderer she knew was innocent, who kept people in prison to use as cheap prison labor– and yes, who supported ICE’s separation and imprisonment of migrant children and parents who immigrated illegally to the US.

She’s a prosecutor– prison, labor camps, and jack-booted police is all she knows. That’s how she’ll rule.

But we’ll have unity, even if we have to make it mandatory.

It’s easy for the rich coastal white elites, who have essentially always controlled DC, to brush off about 70 million voters as deplorables.

There are probably tens of millions more Americans who aren’t Trump supporters, but also feel betrayed, bullied, and downright oppressed by Washington DC.

They always have, ever since the Whiskey Rebellion in the 1790s, when Alexander Hamilton rode out to suppress an uprising, and undo everything these Revolutionary War Veterans had fought for, before the ink was dry on the Bill of Rights.

Then and now, these people’s legitimate concerns are ignored, they are mocked and ridiculed, as backwards, uneducated hill-billies.

But I’m sure the current regime is serious about unity. It’s like an abusive husband who’s version of “staying together for the kids” is, do whatever the hell I say, or I’ll hit you. But only because I love you.

But here’s the thing. While the tolerant left makes their enemies lists in Washington DC, 27 states have Republican governors.

62 of those 99 legislative houses are controlled by a Republican majority.

Now, I hate the whole Republican Democrat thing. Party politics is part of how we got into this mess in the first place. The best case scenario, in my opinion, is so much gridlock and disagreement that the government can’t get anything done.

But at times like these, it’s nice to have a little buffer between you and the one party majority federal government– Democrat President, Democrat Senate (with the Vice President’s tie-breaking vote), and Democrat House.

If state governments take a stand, and say enough is enough, that could be a serious check on federal power. Citizens might have a little protection from the worst abuses DC has planned.

They haven’t opposed the feds in about 160 years, but there has always been a good reason: a strong US dollar. States can’t print their own money. So if they want that federal cash, they have to play by the feds’ rules.

But the dollar has been printed into oblivion– trillions of new dollars in the last year alone, while people lost their jobs, and the economy shrank. It doesn’t take an economist to understand that some serious inflation could occur.

But consider the fact that the US dollar is currently the world reserve currency, meaning there is an 8 billion person market for dollars. Supply and demand– you can have an enormous supply of dollars, without seeing the value drop much, as long as the demand stays steady, that 8 billion person, worldwide demand for dollars.

China, doesn’t want that to happen. China wants its own currency to be the new world reserve currency, and the renmibi has already risen against the US dollar.

So what happens if the US dollar is unseated as the world reserve currency, and the market demand for dollars goes from 8 billion people, to 320 million. We’re staring down the destruction of the dollar, and possible total loss in faith in the paper currency, which leads to hyperinflation.

That is NOT good for America, but it is almost inevitable, if not this year, then sometime soon.

In my calculation this is the biggest problem the US is facing, and it is the largest threat to almost every single individual American. And this is a problem that was not going to be solved, no matter who took control in Washington DC.

But as we’ve seen in 2020, in times of crisis, our dear leaders reach for dictatorial power. They never let a good crisis go to waste. I think the current administration in DC is full of very scary authoritarians to have in power in such tumultuous times.

The state governments need to realize that Washington DC will not solve the problems with the US dollar, and take matters into their own hands, if they don’t want China to steamroll the US.

Now it’s not like the states need to create their own fiat currency– there are already digital cryptocurrencies out there that are perfectly capable as serving as a medium of exchange.

I personally like Ethereum because anyone can build applications on its blockchain and power them with Ether. And Monero is the most prominent and promising, in my opinion, true privacy coin.

The role of state governments is simple– protect us from the feds, and those states will be rewarded with all the economic and brain capital fleeing the crumbling United States.

So I really don’t want to see two Americans, cut down the Red and Blue lines. That would probably be an improvement, but not a revolutionary change.

I want to see actual freedom. True free markets are how problems are solved, because there is profit in serving the needs of your fellow man.

I won’t pretend to know how to solve every problem in the world.

But I absolutely have faith that when free people are unshackled from the government and all their manipulations of currency, law, society, and information– those free people will create the most prosperous society ever, for everyone involved.

This isn’t about Red and Blue, Republican and Democrat, or even State versus Federal power.

This is about freedom versus control. Tyranny versus liberty. Authoritarianism versus self ownership.

These are scary times, but they also present tremendous opportunity to change the world for the better. The elites aren’t going to let any of these crises go to waste, and you shouldn’t either.

Serve your fellow man, solve the biggest problems you can find– whether that’s local or global– and you will be rewarded.

You’ll also find a link to join my email list, which will also ensure we never lose contact.