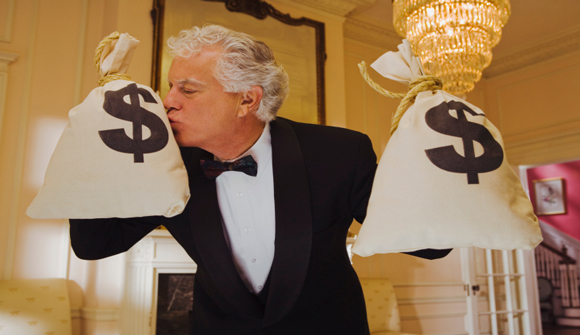 Sam Wilkin is an economist and has been studying the very rich for most of his working life. And he's not talking about ordinarily loaded here… No, he's talking about 'a fortune of yachts and personal helicopters, of diamond-encrusted light fixtures, of stately homes and private islands, of your name emblazoned upon landmark buildings and a charitable foundation bravely tackling world issues'. A fortune that ensures your name will live forever, even if you can't.

Suppose such a fortune was your goal. How would you acquire it? Wilkin seeks to answer this question by studying the relatively small number of people in history who have achieved this. And he finds a certain number of common factors.

Wilkin has determined that behind almost every great fortune, there lies what he calls a 'wealth secret'. This is a piece of knowledge or a technique that, while not exactly criminal, certainly skirts the customs of the time, and possibly the laws as well. All of them, he says, involve 'some sort of scheme for defeating the forces of market competition'. Many involve legal maneuverings or the exercising of political influence. Boldness and fearlessness are a given. Mild psychopathy probably helps, too. – Daily Mail, July 30, 2015

That the super-rich are not like you and me is no surprise. Among other differences, they have billions of Federal Reserve Notes to their name – more than they can possibly spend. How does one join them?

The author profiled in today's article asks that question. He finds that massive wealth most often arises from having "some sort of scheme for defeating the forces of market competition." Usually this includes "legal maneuverings" and "political influence."

We all know people who work hard, think positive and have great ideas, yet are not wealthy.

We also know lazy fools who somehow amassed a fortune.

Since the correlations clearly aren't causative, some other force must be at work. Professor Wilkin's book suggests the wealthy become so not by excelling in a competitive economy, but by making it uncompetitive. This applies to modern tech titans as well as 19th century robber barons.

Their main tool is the modern regulatory state. The reams of regulation that govern manufacturing and distribution of practically anything create economies of scale where none would otherwise exist.

For example, Apple can afford to have hundreds of engineers and attorneys decipher the technical rules of the Federal Communications Commission, and equivalent agencies in other countries. The person who thinks he can build a better smartphone in his garage can't call on that resource. He won't succeed no matter how great his idea is or how hard he works.

Maybe some people do acquire great wealth without political influence, but we can't think of many examples. Wealth, political corruption and moral weakness always seem to find each other. As the article says, "It's all very well being the best in your field, but it's much more lucrative to be the only."