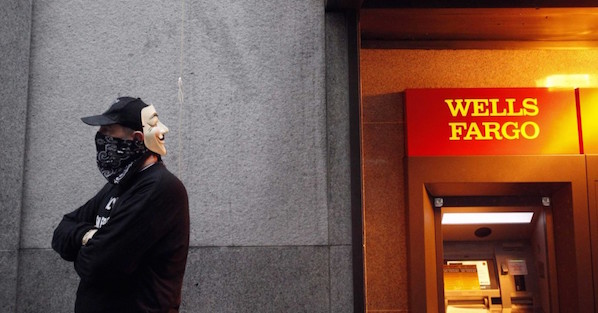 STAFF NEWS & ANALYSIS
Wells Fargo paid more in criminal penalties than it paid in interest to its depositors
By Simon Black - February 25, 2020

Last week Wells Fargo paid the largest fine yet for one of it’s many scandals– $3 billion.

This time, the fine was for opening bank accounts under customers’ names without the customers’ knowledge or consent.

Workers at Wells Fargo did this to boost their own sales goals. They forged customers’ signatures, falsified records, and engaged in outright fraud.

This internal identity theft ended up costing customers millions of dollars in unnecessary fees and overdraft charges. And it went on for fourteen years.

This was no accident, one-off, or a case of a few bad apples. In fact, this wasn’t even close to the only scandal Wells Fargo has been fined for over the past few years.

A computer glitch once caused over 500 Wells Fargo customers to have their houses foreclosed on.

They accidentally charged late fees to more than 100,000 customers when it was the bank that was at fault.

Because of all this– and sadly, I’m sure I overlooked a couple scandals– the government has fined Wells Fargo a total of $18 billion since 2012, according to data compiled by the New York Times.

What’s really remarkable about this is that, over the past decade, Wells Fargo has paid a TOTAL of just $2.03 billion in interest to its retail customers.

In other words, the fine that Wells Fargo just got hit with last week is more money than they have paid in interest to their retail checking account customers over the last ten years combined!

Oh yeah… and out of the $3 billion fine, only $500 million will be set aside for the Wells Fargo customers who actually got scammed.

The rest ($2.5 billion) goes to the government.

This pretty much tells you everything you need to know about justice in the financial system: Wells Fargo scams customers for years. Then they finally get caught… and it still takes years to sort it all out in the courts.

By the time they get slapped with the big fine, the government takes most of the money… more money, in fact, than the defrauded customers earned in interest over the previous ten years combined.

Why would any rational person continue to put their money in this system???

We stand in line at the bank to give these people our money, only to have them lie, cheat, and steal whenever they have the opportunity to do so.

They treat people, not like valued customers, but like criminal suspects and dairy cows. They gamble our savings away on whatever investment fad guarantees them fat bonuses, and when it all comes crashing down, they go to the taxpayer with hat in hand claiming that they’re too important to go out of business.

What a load of bullshit.

I’ve been saying this for years– there are alternatives.

Personally, I got so frustrated with the banking system that I started my own bank… which is a pretty great option. But I recognize that most people aren’t going to go through that much trouble.

But stepping back from the banking system is a lot easier than that.

It’s difficult to divorce yourself entirely from the banks; we all need some money in a checking account to pay the bills.

But even something as simple as physical cash can go a long way in reducing your exposure to the banks.

You don’t need to hold 100% of your savings in a bank. You can keep some physical cash in a safe at your home, and effectively become your own banker. When your bank only pays 0.02% interest anyhow, it’s not like there’s much opportunity cost in holding cash.

Cryptocurrency also still shows a lot of promise… a way to eliminate banks entirely and engage directly in peer-to-peer transactions. But we’re still several years away before this is widely adopted.

As a private store of value, gold remains an excellent option; it has a 5,000 year history of maintaining it’s value. So if you want to hold savings with no counterparty risk, put gold in a home safe.

Point is, there is no reason to continue to rely on giant bloodsuckers like Wells Fargo. They’ve proven time and time again that they cannot be trusted with our savings… they’re just foxes guarding the henhouse.