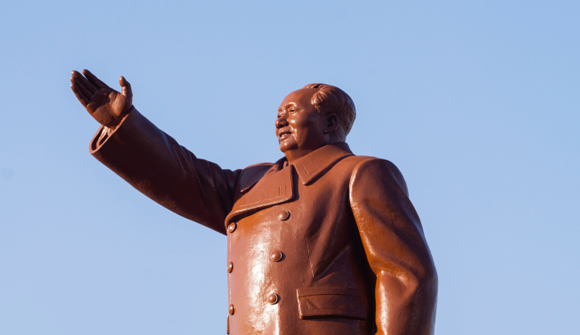 At the Yizhen Middle School near Beijing, China, he witnessed and participated in the birth of China’s “Cultural Revolution.” He later recorded his personal account in a book called Born Red: A Chronicle of the Cultural Revolution.

The leader of Communist China, Chairman Mao, warned the country that revisionists were threatening to erase all the progress made since the Communist Revolution which brought Mao to power.

It had been almost 20 years since the bloody revolution, and Mao wanted to reinvigorate the rebel spirit in the youth. He instructed students to root out any teachers who wove subtle anti-communist sentiments in their lessons.

Mao encouraged students to rebel against any mindless respect for entrenched authority, remnants, he said, of centuries of capitalist influence.

Students at Yizhen Middle School, like many others, quickly took up the task. They “exposed” capitalist intellectual teachers and paraded them around in dunce caps with insulting signs hung around their necks.

Teachers were beaten and harassed until they confessed to their crimes… most of which were, of course, false confessions to avoid further torture.

It only escalated from there.

What ensued puts Lord of the Flies to shame.

One teacher killed himself after being taken captive by students. Most teachers fled.

Soon the students were left entirely in charge of their school. Two factions quickly emerged, one calling themselves the East is Red Corps, and the other the Red Rebels.

One student was kidnapped by the East is Red Corps, and suffocated to death on a sock stuffed in his mouth.

A girl was found to be an East is Red spy among the Red Rebels. She was later cornered with other East is Red students in a building. She shouted from a window that she would rather die than surrender. Praising Chairman Mao, she jumped to her death.

Some Red Rebels died from an accidental explosion while making bombs.

Many were tortured, and another student died from his injuries at the hands of the East is Red Corps.

A female teacher refused to sign an affidavit lying about the cause of death. She was beaten and gang-raped by a group of students.

Robert Greene explains these events, in his new book, The Laws of Human Nature. (Emphasis added.)

Although it might be tempting to see what happened at YMS as mostly relevant to group adolescent behavior… what happened at the school occurred throughout China in government offices, factories, within the army, and among Chinese of all ages in an eerily similar way…

In the power vacuum that Mao had now created, another timeless group dynamic emerged. Those who were naturally more assertive, aggressive, and even sadistic… pushed their way forward and assumed power, while those who were more passive… quietly receded into the background becoming followers…

Once all forms of authority were removed and the students ran the school, there was nothing to stop the next and most dangerous development in group dynamics. The split into tribal factions…

People may think they are joining because of the different ideas or goals of this tribe or the other, but what they want more than anything is a sense of belonging and a clear tribal identity.

Look at the actual differences between the East is Red Corps and the Red Rebels. As the battle between them intensified it was hard to say what they were fighting for, except to assume power over the other group.

One strong or vicious act of one side called for a reprisal from the other, and any type of violence seemed totally justified. There could be no middle ground, nor any questioning of the rightness of their cause.

The tribe is always right. And to say otherwise is to betray it.

I write this on the eve of the 2018 midterm elections.

And like Mao handing down his orders to dispose of capitalist sympathizers, such have the leaders of each major US political party rallied their supporters.

This is the most important election of our lifetime, they say.

No middle ground. Violence is justified to get our way. Betray the tribe, and be considered an enemy.

Just like Mao, they have manufactured a crisis that did not previously exist.

The students had no violent factions before Mao’s encouragement. They had no serious problems with their teachers.

Is there any natural crisis occurring right now? Or has the political establishment whipped us into an artificial frenzy?

This isn’t just another boring election, they say. This is a battle for our future.

The students battled over who were the purest revolutionaries.

The voters now battle over who has the purest intentions for America.

Do the factions even know what they are fighting for anymore?

They are simply fighting for their tribe’s control over the government.

The battle of the factions at schools across China were “resolved” when Mao came to support one side or the other. In that sense, it very much did matter which side the students were on…

The government came down hard against the losing faction.

They had chosen wrong and found themselves aligned against the powerful Communist Party.

It won’t be a dictator that hands control to one faction or another in this election. It will be a simple majority. And those in the minority will suffer.

The winners will feel that it is their time to wield power, just as the students were happy to finally have the upper hand on their teachers.

If Mao didn’t have so much power, he could have never initiated such a violent crisis.

And if our government didn’t have so much power, it would hardly matter who wins the election.

Yet here we are, fighting for control of the government because each faction threatens to violently repress the other if they gain power.

It is a manufactured crisis. A crisis that only exists because political elites in the government and media have said so.

They decided that this election will spark the USA’s “Cultural Revolution.”

And anyone with sympathies from a bygone era will be punished.