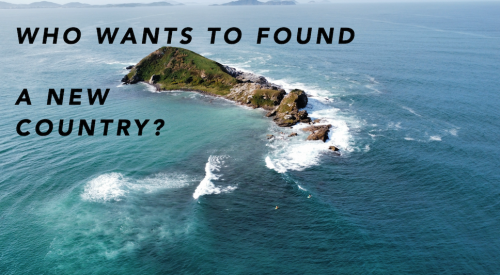 Correction: This article has been edited to add information about Prospera’s legal standing.

I want to found my own country. I don’t like any of the options available, and I think I could design a better governing structure that allows freedom and prosperity to flourish.

But that’s a tall order.

There have been a number or projects and concepts which tried to gain various levels of autonomy.

In the early 70s, Operation Atlantis intended to gather libertarians, sail out to international waters, and declare sovereignty. They built a boat out of rebar and concrete, and it sank into the Hudson. They revived it, and managed to bring it all the way down to the Bahamas… where it sank again.

More recently a couple projects in Chile named after an Ayn Rand character fell apart before they began. And those weren’t even special jurisdictions that could set their own tax rates and business regulations, for example. They were essentially just meant to be intentional communities with likeminded people come together to learn and produce.

One appeared to be a legit scam, and the other was abandoned due to the political situation in Chile.

Chile had a lot going for it, but then elected extreme socialists who are rewriting the Constitution, and went mental over Covid… so it turned out not to be the best location for those looking for freedom.

Then there is Liberland, which seven years ago planted its flag on an unoccupied river island between Croatia and Serbia which neither country officially claimed since the 1991 dissolution of Yugoslavia. Its motto is “To live and let live” and they have done a great job thinking through a form of Republican government, and mapping out the land. They want to essentially become a micro-state with a free economic zone.

But no one actually lives on the land, and visitors have in the past been detained by Croatian secret service just for visiting. However the President of Liberland claims they are building more positive ties with the Croatian government.

One of the most promising projects to create a special legal jurisdiction is Prospera on the island of Roatan, part of Honduras. It used existing legislation to create a ZEDE– Zone for Employment and Economic Development.

The project was well underway when a new party came to power vowing to boot the “neo-colonizers”. Prospera has a solid legal basis to fight any revocation of its charter… in Honduran courts. Not exactly known as a country extremely committed to rule of law.

However, after publishing this article, Prospera’s legal team reached out to inform me that although the legislation authorizing ZEDEs has been repealed, the government has “not officially denied our position that the ZEDE repeal does not apply to Prospera.”

Furthermore, if it comes to it, the project will likely not be arguing in Honduran courts due to “legal stability agreements that ensure jurisdiction for any dispute is the international arbitration body known as ICSID.”

I do however think my earlier point stands: how much growth and prosperity do you expect to attract locked in a legal battle for existence, in a hostile political environment?

Don’t get me wrong, I think projects like these are awesome, and I’m glad someone is doing it.

But to try to gain more success, we need to look at these with a critical eye, to learn what worked, what didn’t, and where we can improve to make the dream a reality.

One issue is is hostility of host/ neighboring governments:

Second, these need to be profitable and scalable:

A third problem is starting too big:

So I have been thinking about how I could solve these problems to make a new country project a success.

And I came up with a five step plan to start small, and grow into a sovereign country.

This solves the previous problems identified by:

So I am starting with the Parallel Economy Project.

We can specialize and trade to build a foundation for a new economy that will support projects like these, so we don’t have to rely on hostile institutions.

That’s what the Parallel Economy Project is all about. Being part of a community taking steps to ensure that they are in positions of strength for the coming new economic order.

Join today on Locals with a free trial using code FOUNDER (expires on September 18). There are two exclusive videos already uploaded, one on why geopolitical changes over the next decade could allow new countries to form, and the other on how to use mass desire to market a parallel economy business.

In September, a new video will be released that goes into much more detail on the physical community which I intend to break ground on by September 1, 2024– two years from launch.

If we do it right, we will have all the replacements ready when the old institutions come crumbling down. Massive wealth and power will be decentralized, and transferred into the hands of those who saw what was coming, and prepared.