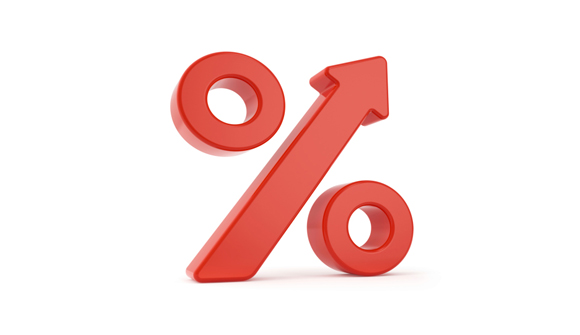 US Fed likely to tighten before year end … The US Federal Reserve is on track to raise rates before year end, with a pick-up in economic activity and positive dialogue emerging from the central bank – Investor Daily

Dominant Social Theme: The economy is booming. Hike, hike, hike. It's all we can do.

Free-market Analysis: The tightening talk is picking up. Principal Global Investors manages some US$350 billion, much of it in retirement plans, and its officials "now assess the likelihood of a December rate rise at 54 per cent," according to Investor Daily. A March rise is assessed at 71 per cent.

"There is good potential upside from higher investment, no drag from government spending, little change in the US dollar, and the inventory overhang fading," [Baur] said.

"Some pick-up in activity as inventories decline, unshakable consumer spending, and a couple of decent payroll reports should be enough to lift the clouds and push rates mildly higher by year end." Moreover, growth is expected to be in the 2.5 per cent to 3.0 per cent range through the end of 2016.

Of course, there are alternative views, especially for those who believe that Fed stimulation has merely enhanced economic activity in a bear market that may extend back to the early 2000s. Peter Schiff, president of Euro Pacific Capital, has been vocal about what he considers to be a false perception when it comes to a US recovery.

In his most recent article entitled "The Shadow Rate Casts Gloom," Schiff makes another point that runs counter to the current wisdom. He believes the Fed may already have been tightening for more than a year now.

Schiff bases his analysis on a gradual retreat from the Fed's strategy of quantitative easing and also "forward guidance" that has provided some assurance that the Fed would not begin to tighten without signaling a change in policy. "Such assurances effectively remove near term interest rate risk, which stimulates financial activity," Schiff points out.

To account for these important factors, University of Chicago professors Cynthia Wu and Fan Dora Xia, constructed a model for the "Shadow Rate."

While the fed funds rate has remained between 0.0% and 0.25% ever since November of 2008 (Federal Reserve Board), the Shadow Rate moved much lower, factoring in the effects of QE and forward guidance. That rate got as low as -2.99% in May of 2014. (Federal Reserve Bank of Atlanta, CQER, Shadow Rate)

… After QE was officially wound down in October 2014, the Fed began to change its forward guidance to actively suggest that a long-term campaign to lift interest rates would begin in 2015. This also worked to help tighten monetary conditions.

As a result, the Shadow Rate moved up from -2.99% in May of 2014 to just -.74% in September of 2015, (FRB Atlanta, CQER, Shadow Rate) an increase of 225 basis points in just over a year. This is a fairly robust tightening trajectory that can be said to have clearly taken a toll.

Schiff is certainly correct that this can be interpreted as a significant upward adjustment in rates, even though they are not reflected in standard analyses. And this may have other ramifications regarding equity performance, as history tells that markets peak about a year to two years after tightening begins.

Schiff concludes that any hike initiated by the Fed won't last very long. The "recovery" the Fed is fixed on is probably built on false numerical perceptions and in any event, monetary tightening has already been taking place for more than a year.

It's Schiff's perception that any tightening the Fed does is liable to be quickly reversed as a subsiding economy will show considerable further weakness as a result of even minimal hikes.

"The next easing cycle could likely start much sooner," he writes, "and the accompanying monetary stimulus be much larger than just about anyone believes."

For this reason, investors might want to create positions that reflect monetary easing rather than monetary tightening, as tightening, if it even happens, won't last very long.

Of course, monetary easing should have a positive impact on gold and silver prices relative to the dollar and would generally erode the dollar's "value" relative to other currencies, worldwide.

Monetary easing might also have a positive effect on equity prices, especially if they have been pounded down by hikes, no matter how ephemeral.

Here at The Daily Bell, we're on record as expressing doubt as to whether the Fed will actually hike at all over the coming months. Yes, perhaps it will, but we believe we detect a level of hyperbole as well.

Fed officials are continually signaling the possibility of a rate hike without actually generating one. This is actually the opposite of the "forward guidance" that the Fed is supposed to be providing, but one can hardly blame Fed officials. They are in a tough spot.

Any rate hike may be seen as having severe consequences given that tightening may have commenced more than a year ago – if we accept Schiff's analysis – and the economy is likely not nearly so strong as mainstream analysis suggests. Much better to initiative a "rhetorical" rate hike than an actual one, as the putative idea is to restrain market indexes and puncture evident bubbles now occurring all over the economy.

Perhaps the Fed tightens but even if it does, it may not last long. The US economy is not nearly as healthy as it's being made out to be. And, yes, it does make sense to prepare for further easing one way or another.

One must also keep in mind the idea that the long-term goal of central banking is evidently to introduce a global currency and that to do this considerable chaos needs to be injected into the larger marketplace. Aggressive easing and an eventual market top considerably higher than where we are now might be seen as effectively supporting the goal of creating a "bancor."

Who can blame investors for being confused? The Fed says one thing but larger central banking priorities may be something else entirely. At The Daily Bell, we'll continue to provide information on the ramifications of zero-bound rates, their duration and the real agenda of modern central banking.