EDITORIAL, STAFF NEWS & ANALYSIS
Who Cares About the “Wealth Gap” if Everyone is Richer?
By Joe Jarvis - June 20, 2017

How many successful people can there be? It seems like, after every article you read these days, the author bio talks about a book they have written, an invention they created, a prestigious award or some other indicator of great success. Yet I’ve never really heard of most of them.

I used to get pings of jealousy when I would see descriptions like that of successful people; it almost felt like there were a limited number of “success” spots on planet earth, and if they were taking one up, it made it that much less likely for me to get one.

But it’s not true. There is no limit to the number of successful people that can exist, especially since everyone has a slightly different idea of success.

And in the same vein, there is no limit to how many wealthy people there can be. Wealth is not a zero-sum game, there is not some amount of wealth out there that once it is grabbed, is gone. Anyone can create wealth. Growing a garden is a great place to start creating the necessities to live and giving yourself a little food shortage insurance plan.

When people say the rich get richer and the poor get poorer, that is a huge misrepresentation of what is really happening, even if the rich have far more compared to the poor.

True, the wealth gap has doubled from 1-10 to 1-20, yet the poor person is living as richly as only the wealthy could in years past.

This is the true nature of the wealth gap. Almost everyone is better off these days. The gap doesn’t matter as much as the minimum standard of living.

The classic example which always comes to mind for me is of President Calvin Coolidge who lived in the White House fewer than 100 years ago. One of the most powerful people on Earth watched helplessly as his son died of an infected blister from playing tennis.

In that sense, everyone living in America today has a higher standard of living than the President and his family had 90 years ago. Advancements in medicine, technology, information, and production have risen the standard of living for everyone. 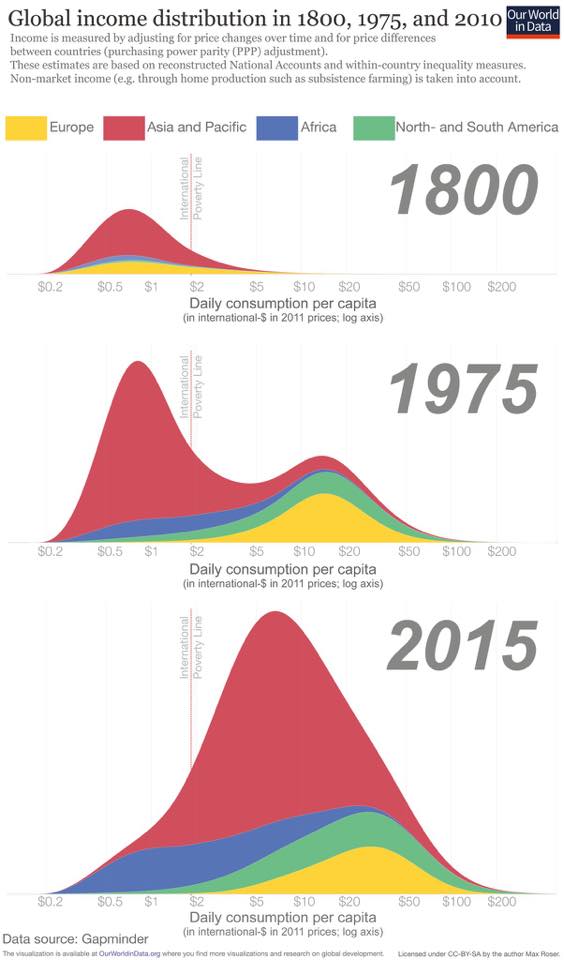 This chart shows the exponential nature in which people are being lifted out of poverty.

Poverty has not yet been entirely eradicated, but at this pace, as long as those in power don’t thrust the world back into the dark ages, it is only a matter of time until Earth is basically free from poverty.

And at that point, when all needs are being met, what does it matter if the richest person has 10, 50, or a thousand times more wealth than the poorest?

Options and a Backup Plan = Freedom

There was a time when the options for a person to create enough wealth to live were very few.

Not a great choice to have to make. Today that conundrum is disappearing from almost all lives on Earth. If the trend of eradicating poverty continues, it shouldn’t be long until everyone on earth has a better option to create wealth.

But unfortunately, governments and their crony deals with corporations are standing in the way of the quickest progress. They keep destroying the wealth in wars and misallocation of resources that would otherwise be spread through the ranks of the people.

A great place to start would be to actually allow people to keep the products of their own labor, instead of taxing it away, or writing laws and regulations which make it all but impossible to survive without bowing down to the corporate overlords.

This, of course, means respecting the honestly acquired wealth of the richest as well as the poorest. You can’t support the poor being freed to get ahead while simultaneously calling on the rich to be robbed to even things out.

Governments and corporations have indeed set up the world to make it hard to get ahead, and true justice would involve them paying damages to those they have wronged. But don’t believe that government power can be used to solve the problem that they created.