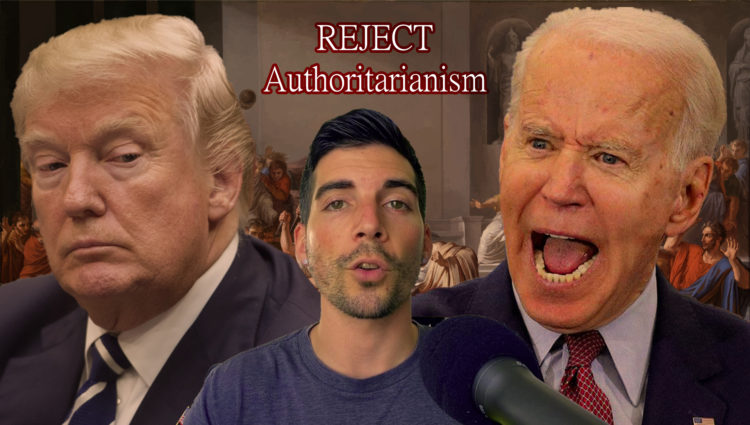 It’s hard for me to watch people celebrate any politician. I cringe seeing people act like they have elected a savior– or honestly even believing they are putting a decent human being in office. I can’t root for a team because I see politics itself as so absurdly flawed.

But I understand that my extreme skepticism of government is sadly outside the mainstream.

So naturally I am tempted to become cynical and criticize anyone for believing in a politician– which is just going to get me accused of supporting “the other side” and make people tune me out.

So I am choosing to view the latest election results, and celebrations, in a different way.

I really find it hard to believe that many people voted for kid-sniffing Biden, and cop-Harris.

They voted against Trump because they saw him as authoritarian, and did not like the government having that much or that kind of control.

This is the rejection of authoritarianism. Now hear me out, because I am quite aware the new President and Vice President are just as authoritarian, if not more authoritarian than all the other Presidents of the last few decades.

Let’s ignore for a moment whether voters are right or wrong, and consider the possibility that Americans seem to at least think they have embraced anti-authoritarianism.

In fact the races in Congress, Senate, and the State Houses show exactly that– a rejection of Socialism, and the desire to return to a more moderate, temperate, kind of evil.

If Trump was perceived as the most power-hungry figure, the most likely to become Hitler (see my recent video) with the biggest cult of personality, then you can be encouraged by what the voters rejected.

Remember, you have almost no actual control over who gets elected, nor over what these politicians do once in office

Simply being the opposition to the new figureheads won’t produce results.

But we can use the principles of judo to understand how to effectively market to the people who believe they just rejected authoritarianism.

Judo uses the momentum of the opponent to direct their energy into your own move, and make them go where you want.

So rather than saying, “You idiots just elected someone even worse than the last guy!” it seems like it will be more effective to say, “I’m so glad everyone realized the President had too much power. I’m so happy people want more control over their own lives. Here’s how you can do that, and minimize the impact of those rogue, terrible politicians.”

Honestly this might be the best bet for actually removing the influence of government on our lives.

But not through government or elections.

The trick is providing an alternative outlet for this energy. A product that someone removes the influence of government, and provides an alternative– I’m thinking something like Special Economic Zones that can set their own rules, or mutual aide society types of organizations.

But in order to capitalize on any rejection of authoritarianism, that energy has to be channeled into something productive and worthwhile– not elections or government policy making.

Don’t forget, the powers that be shoehorn us into these two terrible camps, as if the voters believed in these politicians, or even the system. They have been tricked into thinking this is the only way to run a society.

And still over 1/3 of eligible voters don’t vote, but who can blame them?

Rejecting socialism, ending fascism, fighting back against tyranny and authoritarianism was not in fact on the ballot in any meaningful way.

And yet based on the attitudes I’ve seen, it seems that given the option, the American people would be as “American” as ever.

“The soul of America” people say, and my eyes immediately want to roll, it’s an involuntary response, I can’t help it.

There really is no one cohesive American culture, and there never has been– see my video on the 11 rivals nations that have been fighting for power over DC since day one, and continue to do so.

But if this “fight for the Soul of America,” was about removing Trump’s control over your life, rejecting strongmen leaders, favoring independence, freedom, personal liberty, the rights of each and every one of us, then I am down for it.

I think that is still a message that could resonate with people, if properly framed and directed– for tips on that you’ll want to turn to my video on the father of the modern elite, Edward Bernays.

But the truth is, when it comes to voters or consumers, 90% of people don’t really care, have no convictions, no real direction or beliefs– they are blank slates to be marketed onto.

Say, 8% do have strong convictions and opinions of every kind, and it is from among that group that control of the national narrative emerges.

And about 2% are perhaps something like you and me. People who cast votes for the libertarian, or the portion of people who are specifically against voting. People who would rather be left alone, who understand philosophical roots of individual liberty, who have a live and let live mentality, and just try to go through life, doing their own thing in a positive way.

That’s all we need. because that means there are over six million more Americans, and probably 140 million other people on earth that are part of our broad tribe. We don’t need a majority or even a plurality.

Really, all we need is a small group of likeminded people who are the true producers and builders in the world, and to shrug off the rest.

So you don’t have to be part of the “totally lost faith” folks, and you can ignore the “with us or against us” crowd and the ones who are creating enemies lists for their “truth and reconciliation” committee.

They are the minority. Vocal yes, but not the “soul of America.”

Now don’t get me wrong, Socialism is a bigger threat than ever. The worst thing that could happen is people are lulled into a false sense of security by this election, and stop paying attention.

Attention to what actually matters… which Trump actually distracted from. There were plenty of real terrible things Trump did that deserved criticism, but we couldn’t get a word in edge-wise because people were busy criticizing him for the latest tweet– not the $6 trillion the “conservative” government borrowed.

So here’s the deal, from an anarchist convinced that the government is inherently illegitimate, to all the normies who think politics is worth a bag of beans.

Continue to reject authoritarianism in any form.

Trump was obvious, he wore it on his sleeve, he didn’t hide it, and he did us a service in that way. He showed us all the dangers of a strong, powerful, centralized state in the wrong hands.

Don’t let the more seasoned professional con artist politicians fool you. Do not let them exert power in the name of rejecting Trumpism.

Reject it all. Reject anyone that would try to control you, your family, your community, without your consent. And no, 50.0001% does not mean the other 49.9% consented.

It’s live and let live, the golden rule, karma, the basis of every major religion, and every decent moral dogma. Do unto others, first do no harm, do not force others if you would not want to be forced.

If people somehow accept an authoritarian who simply doesn’t sound and act like Trump, they have rejected nothing about Trump, and simply replaced him with someone more palatable to their personal favorite type of oppression.

Anyway, I try to not give the government more credence than it deserves. I still don’t think it can keep me from being free, as I argue in my video on “traps” that keep us unfree.

But I do still think there is plenty of hope for the bottom line– there is a way to use this general feeling that centralized powerful control over your life is not a good thing for individuals or society.

And that is the positive I am going to take away from this election.