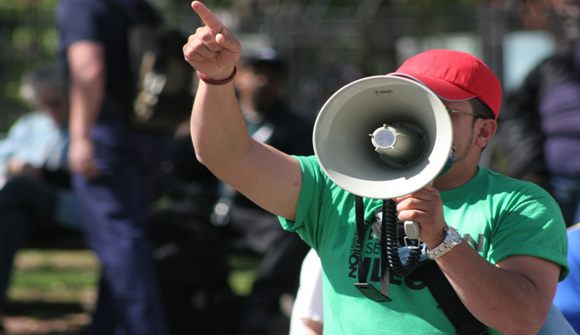 STAFF NEWS & ANALYSIS
Why School Has Nothing to Do With Students
By Joe Jarvis - January 05, 2019

Teachers plan to go on strike in the Los Angelos school district on January 10th.

They have plenty of complaints. But what they don’t have is accomplishments.

Only 22% of fourth graders in the district scored proficient in math. Even a typical terrible inner-city school district has a 30% proficient rate.

Since 2003, 245,000 students have left the district in favor of better districts, or charter schools.

As I’ve discussed previously, school funding is based on enrollment. So removing yourself or taking your kids out of a school system actually does help defund them–even if you, unfortunately, don’t get to keep the money for alternatives.

One school actually sent their resource officer out to drag a student back to school away from a job she was working. That’s one way to stay funded… simply kidnap hardworking students, trap them with a bunch of miscreants, and force them to listen to your horrible school lessons.

So in LA they have a terrible school which is performing even worse than expected. They are losing “customers” (if you can even call people forced to attend and forced to pay “customers”). And a disproportionate amount of their funding goes towards retired teachers.

That sounds like a pretty bad deal for any kid left attending the school. But these students are not the concern. They don’t have a union representing them.

Teachers do. So they are striking.

Enter Alex Caputo-Pearl, the teachers union president, who is pushing the district to increase spending by hundreds of millions of dollars annually in a new collective-bargaining agreement with teachers. Topping the union’s many demands are a 6.5% raise, reduced class sizes, and additional support staff. The union also wants the district to lobby state lawmakers to limit charter-school growth.

There is currently a waitlist for students to get into charter schools… and the teachers’ union’s main concern is stopping the growth of charter schools.

As Mel Brooks would say, they have to protect their phony baloney jobs.

And that includes the union President.

Mr. Caputo-Pearl also faces pressure from within his own ranks. In 2016, he championed a 33% increase in union dues, to nearly $1,000 annually, to compensate for a 25% decline in membership since 2008. But he needs to show members something concrete in return or, in the post-Janus environment, they might quit the union.

But here’s the thing. The district tasked with teaching the next generation of youth doesn’t know how to balance its budget. And it’s been so bad with its tax dollars, that the county has to step in and take over.

So the district is hemorrhaging money, losing students, and failing to educate the ones who remain… and the teachers are striking for a pay increase.

So far this all seems to be about teachers, unions, administrations, taxpayers, politicians, and retirees… but what about the students?

A reader commented about this the other day in an email he sent me. He said no one paying attention actually thinks schooling is for the kids. It is really “free” daycare for parents.

UTLA plans to launch its strike four days after students return from the holiday break. By inconveniencing parents—most of whom are low-income and rely on schools to take care of their children during working hours—the union aims to bring public pressure on the district.

It’s true. Schooling has absolutely nothing to do with the students. They are the last concern, an afterthought if anything. And the school districts, teachers, unions, and unfortunately often the parents don’t really care how bad the education is at the public schools they send their kids to. It’s all about money, convenience, and political power.

You can understand why so many parents there are trying to get their kids into charter schools.

But while LA might be the worst example, it is not alone. Every public school in the United States operates in the same way, to one degree or another.

Charter schools, where the funding follows the student, are one promising solution. But they are still so limited, and still suffer some of the same problems that public funding creates.

Another option for parents who want to defund their district, and who actually care about their children’s wellbeing, is to homeschool.

Homeschooling is growing, but there also are unique options. You don’t have to sit the kids down at the kitchen table and hand them worksheets.

I wrote an article about 6 creative ways to homeschool your kids while continuing to work.

And another about transitioning teens from factory-style schooling, to useful and productive internships and apprenticeships.

This happens in every industry, the dinosaurs cling to hang on to their money, power, and market share. But your kids are too important to be the fodder these fights.

We are witnessing the reorganization of society, away from outdated and unsustainable models of schooling and funding.

Get out ahead of the curve, and your child will be positioned to achieve the heights of success in the emerging economy.