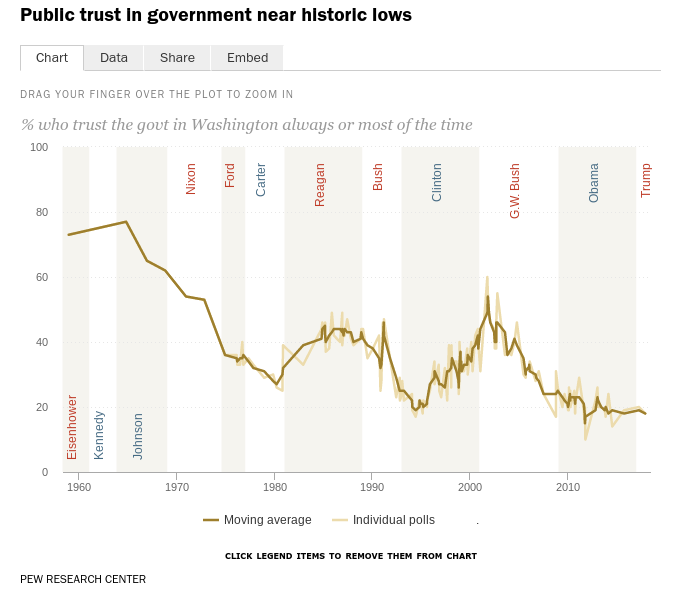 STAFF NEWS & ANALYSIS
Why Trust in Government is at All Time Lows, and Why That’s a Good Thing
By The Daily Bell Staff - February 06, 2018

Do you have confidence in the government?

Concerned about public confidence in the agency, the FBI didn’t want the FISA memo released. They didn’t want people to know their investigations are politically motivated.

Now it’s come out that the Department of Homeland Security pressured CNN into delaying the release of a report until after the Superbowl. DHS was concerned public confidence in Superbowl security would be lost if people found out about an exercise they ran last summer.

The DHS program manager of Biowatch left sensitive documents on an airplane. They revealed confusion and vulnerabilities in the exercises meant to test government response to a biological terror threat at the Superbowl.

“The biggest consequence of this mistake may have less to do with terrorists knowing our vulnerabilities and more to do with confidence in the Department of Homeland Security,” Kayyem [a former DHS official] said. “In the end, confidence in the federal government at a time of crisis is what the American public deserves.”

Hear that? Even if it is not true, the most important thing for government is keeping up public confidence.

And why should we be surprised? Everything the government does is a charade. It is all a show to make them seem more important and necessary.

The TSA is a perfect example. The TSA failed in the ballpark of 80% of tests last year when undercover officials snuck through weapons and explosive materials. But this was a substantial improvement from two years earlier when they failed 95% of tests. Doesn’t that make you feel better?

So what we have are airplanes and airports where everyone is disarmed except for the people actually trying to sneak weapons and explosives through.

And this is the problem with having any confidence in government. It is a false sense of security. They don’t deserve our confidence because they haven’t earned it.

According to PEW research center trust in government is close to all-time lows.

But less confidence in government could mean individuals take control of their own lives, or at least depend on more competent private institutions.

The government derives its power from people who abandon their personal responsibility. When people don’t see it as their own job to look into their food and medicine, you get the USDA and FDA. When people allow themselves to be controlled by fear, you get the DHS, NSA, CIA and so on. When parents don’t know how to raise their kids, they let the government diagnose them with fake diseases and pump them full of drugs.

This doesn’t mean you can’t delegate responsibilities to trusted agencies. But the government shows there is no reason to trust them. They have no incentive to deliver on their promises. And trusting them leaves you vulnerable to all sorts of disaster.

Food suppliers, manufacturers, and marketers already use private companies to test their products for safety and label accuracy. They use the government guidelines as a minimum standard. Most of the USDA protection is a myth, and it is actually the market for quality products that drive companies to deliver safe foods with accurate labels.

Good companies hire independent private auditors to give their investors confidence. Private companies have incentives to answer to their customers and compete to deliver better products and services than their competitors.

More and more neighborhoods, businesses, and even towns are turning to private policing. It’s cheaper, more effective, with less corruption, and fewer abuses by officers. The UK even started outsourcing some investigations, with great results.

The 2020 Census might not have enough funding. Good! Maybe in 1800, the census was somewhat useful. But let’s be honest, it’s now a charade. The NSA could take 20 minutes to download a report that reveals a higher volume of more accurate statistics on the U.S. population than the Census Bureau. For that matter, forget the NSA, Facebook could do the same!

Other recent events that shake confidence in government:

This list is far from complete. And it doesn’t even include the confidence-shaking conspiracy theories, some of which are bound to be true.

Help us out in the comments by adding more examples of when the government proved they do not deserve the confidence of the American people.