30 is the new 20. But it’s not because people are living longer.

And if you just rolled your eyes and thought, “kids these days!” then you hit the heart of the problem.

20-year-olds are not kids, but society treats them like kids.

Historically, kids have started to be considered adults at around 13 years old, or sometime right around puberty.

But the point was to start treating them like adults. Along with freedom came responsibility for your actions.

Because they were expected to act like adults, teens quickly learned what was expected of them to be a respected member of society. And they rose to the occasion, becoming full-fledged adult members of society within a few years.

Usually, at around 18 or 20 years old, young adults would start being seen as equal members of adult society. By then the training phase was over.

But these days, you are treated like a child right up until at least age 21 in the United States. Society doesn’t even begin to consider you an adult until almost a decade after puberty starts.

But it still takes years to become an adult.

In the past, teenagers practiced being adults. Now that practice takes place in your 20s.

So instead of going through the awkward “adult training phase” from 13-20, today you go through the same period from, say, 21-28.

You get your first real job in your 20s. But the company usually has to train you. Not just in the skills required for the job, but basic things like appropriate workplace behavior, using time wisely, staying on task, and showing up on time–or at all.

Teens used to get 7 years of apprenticeship and be experienced skilled workers by age 20. They were ready to support a family. They had practiced responsible behavior. They knew how to take care of themselves, and how to navigate the adult world.

According to Robert Epstein, Ph.D. in his book Teen 2.0: Saving Our Children and Families From the Turmoil of Adolescence:

Through most of human history, young people were integrated into adult society early on, but beginning in the late 1800’s, new laws and cultural practices began to isolate teens from adults, imposing on them an increasingly large set of restrictions, and artificially extending childhood well past puberty.

New research suggests that teens today are subjected to more than ten times as many restrictions as are most adults, and adulthood is delayed until well into the twenties or thirties.

People grow up on a continuum.

The natural way to grow up is to match the responsibilities with physical changes. You get bigger, and you can do harder physical work. Your brain develops, and you can solve tougher problems.

As you gradually and naturally take on more responsibility for your own affairs, you get the freedom to match. You get rights and privileges, not at an arbitrary age, but instead when you prove competence to handle those responsibilities.

That continuum has been smashed.

Since the 1800’s, restrictions on teens have skyrocketed. During this same period, teenage rebelliousness was born. 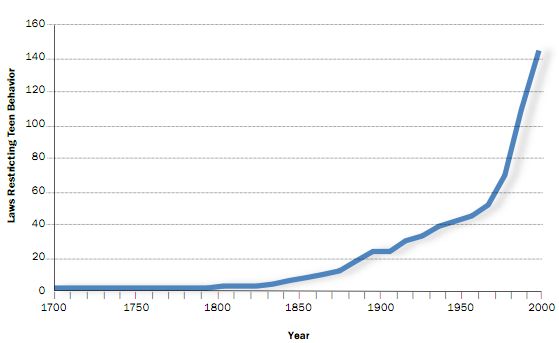 It started with labor restrictions, supposedly for the good of the children. But labor unions also favored these laws, eliminating lower paid competition from young people.

Today older generations have similar incentives to ward off challenges from the youth, for their power and jobs.

Then mandatory schooling laws came. Young people were grouped by age and isolated from most adults. Instead of doing productive work, earning money, gaining skills, and becoming socialized, teens were institutionalized.

This was not just a way to control the youth physically and mentally, but also allowed the industrialists to use tax dollars to condition the future laborers for factory, or other menial work.

Now schools concerned about attendance (or concerned about their budgets, which are based on attendance) are dragging teens away from paying jobs and forcing them back into a failing, dangerous school system. I’m citing an actual case where school resource officers physically removed a young woman from here paying job and dragged her back to school.

Grouping students by age also means less exposure to people of varying ages. That makes it harder for kids to grow up, isolated from adults who could teach them how to be an adult. Instead, the peer group influences behavior.

Marketers latched onto this to create a specific adolescent market or “teen culture.” Now that teen culture is spreading like imperialism, delaying adulthood worldwide.

For most of human history until the time of the Industrial Revolution, the vast majority of children worked alongside adults as soon as they were able, and they transitioned to partial or full adulthood by their early, mid, or late teens.

…in most industrialized countries today teens are almost completely isolated from adults; they’re immersed in “teen culture,” required or urged to attend school until their late teens or well into their twenties, largely prohibited from or discouraged from working…

No longer can you naturally transition to an adult in your teens. Society will not allow it. The government has outlawed being an adult as a teen.

So now you have to attempt to pick back up on becoming an adult after almost a decade of artificial childhood in your teen years and early twenties.

This isn’t the 20-somethings’ fault. They didn’t choose to be treated like children well past puberty. They aren’t the ones who invented the scourge of adolescence.

And in addition to becoming an adult, 20-somethings must also cope with the lingering psychological effects of tyranny during their teen years. Often this oppression they suffered causes real psychological problems, like depression, and even suicide.

By now society has been conditioned to believe that teens are overall incompetent, irresponsible, and helpless.

But to the contrary, the angsty teen didn’t even exist until after teens were restricted. It is not natural, it is not hormones. It is a terrible system.

Frankly, it is a crime being perpetrated against teens and young adults. They have been robbed of their freedom, and this is leaving scars on society.

It creates more dependents, and fewer productive people. It conditions adults to defer to authority, instead of valuing freedom and personal responsibility.

The good news is, responsible teens and good parents, can work together to immediately begin to retake the freedom and responsibility young adults deserve.

As for older people who have already been through the government’s meat grinder, it’s never too late to free yourself.

And although you have been an actual victim, the victim mentality never helps.

Instead, you’ll find empowerment by taking control of your life, gaining skills, and building the career of your dreams.