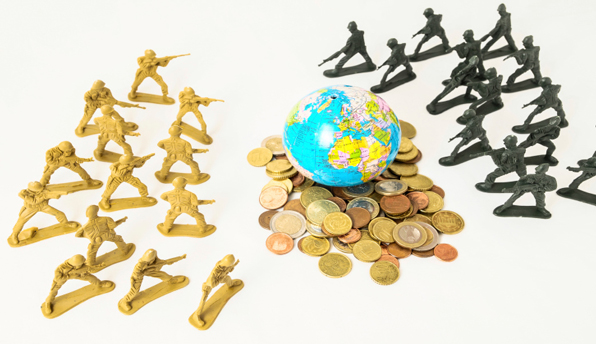 As soon as I take office, I will ask Congress to fully eliminate the defense sequester and will submit a new budget to rebuild our military,” Trump said. “This will increase certainty in the defense community as to funding, and will allow military leaders to plan for our future defense needs.” -Politico

Donald Trump recently gave a speech that was well-received by the defense community in large part because he called for expanding the Pentagon’s budget.

This is somewhat disappointing to those who believe that America’s military is too large as it is and that its overseas involvement is counterproductive.

Trump himself has in the past voiced significant doubts about the Pentagon’s strategic involvements abroad, though he has been consistently sympathetic to certain, supposed Pentagon budget woes. Nonetheless, he had previously been a good deal more hawkish when it came to Pentagon spending.

No doubt, Trump’s evolving positions reflect the amount of pressure he’s come under from the military, which is gathering its forces on Capitol Hill to demand up to $1 trillion or more for an upgrade of the nation’s nuclear program.

Trumps’s changing position on military funding seems mostly to involve expansion of armed services to “rebuild” the military. The Pentagon lately has been putting a good deal of emphasis on nuclear spending.

The U.S. Air Force’s program to develop and field a new intercontinental ballistic missile to replace the aging Minuteman III in the nuclear arsenal is now projected to cost at least $85 billion, about 36 percent more than a preliminary estimate by the service.

Even the $85 billion calculated by the Pentagon’s Cost Assessment and Program Evaluation office is a placeholder number that’s at the low end of potential costs, according to an Aug. 23 memo from Pentagon weapons buyer Frank Kendall to Air Force Secretary Deborah James. It includes $22.6 billion for research and development, $61.5 billion for procurement and $718 million for related military construction.

We’ve written about these escalating demands and Antiwar.com recently commented (here) on them as well:

New US Nuclear Weapons Program to Cost “At Least” $85 Billion … Part of a massive multi-decade scheme of “modernization,” the US Air Force is planning a new ICBM nuclear weapons program to replace the Minuteman III.

The Pentagon’s latest projections are that this will cost “at least” $85 billion. That’s a huge increase, some 36% over the previous estimate they’d offered, but even this is being referred to by Pentagon officials as the “low end” of the potential cost.

Though many officials continue to insist the expense is “necessary,” there is no clear visibility on where the money is going to come from.

Usually, money is found for what the Pentagon wants in at least a piecemeal way. However, its demands may be complicated by its latest accounting scandal, which leaves some $6-$8 trillion unaccounted from a congressional reporting standpoint. We’ve reported on the accounting issues here and here.

In an article (here) entitled, “Ignoring the Pentagon’s Multi-Trillion-Dollar Accounting Error,” FAIR.com points out the following:

In 1996, Congress passed a law requiring all federal agencies to comply with federal accounting standards, to produce budgets that are auditable and to submit an audit each year. At this point, two decades later, the Pentagon has yet to comply with that law, and therefore cannot be audited. It is the only federal agency that is not complying or, the IG’s report suggests, even trying to comply.

One would think that would be newsworthy, but apparently for the major newsrooms of the US, not so much.

This last point is key. In a series of articles on the Pentagon’s nuclear program going back to its inception and beyond we’ve pointed out considerable fraud along with others, and even certain fundamental questions about nuclear weapons themselves.

There are certainly questions about exactly what was dropped over Hiroshima and Nagasaki (here and here) but also about Pentagon nuclear weapons tests in general. Over and over, it is evident that footage of nuclear tests (especially those seen on YouTube) have been considerably doctored – faked – before release. The Pentagon’s Lookout Mountain was instrumental in this doctoring, see New York Times article here.

At the beginning of the year, the New York Times reported on clams that videos of North Korean missile tests were faked (here). The reports explained that the images were spliced together in obvious ways. In fact, the cutaways of the North Korean footage bear considerable resemblance to nuclear-test film presented by the Pentagon in the 1950s and 1960s (here).

Additionally, the Pentagon published footage in the 1960s (here) of a “nuclear test explosion” off the coast of Hawaii that was actually – as the Pentagon itself explained – created from massive amounts of dynamite.

The Pentagon has supported lies about the inception of the Vietnamese war, lies about wars in Iraq and Libya and is seemingly complicit in the creation of ISIS and its subsequent “confrontation” with the West. In its effort to first create and then prosecute “enemies,” the Pentagon misleads the media, Congress and the public on a regular basis.

Perhaps, given its current accounting problems, the Pentagon’s  latest budget demands, including at least $1 trillion for a nuclear weapons upgrade, will be subject to more media scrutiny. Hopefully if Donald Trump is elected president, he will rediscover his initial skepticism about Pentagon expenditures.

The FAIR article points out that the US media enjoys exposing “waste” in individual Pentagon programs. But when it comes to what the article describes as wholesale “looting” for decades, the mainstream media has little to say.

Marry this “looting” to special forces military activities in over 100 countries on a yearly basis and the it becomes clear the Dept. of Defense like the US intel agencies including the CIA, are at least partially unaccountable to either Congress or the public.

This time around, as they seek funds for what will probably be a multi-trillion dollar weapons upgrade, the Defense Department and especially the Pentagon should be subject to significant, additional scrutiny (here).

Conclusion: Surely, with so much money at stake, the US Congress should be more insistent than before. In fact, serious inquiries into the Pentagon’s behavior and bookkeeping might elevate Congress’s approval rating, currently in the single digits. Serious and considered explanations about the Pentagon’s nuclear program – and retractions of falsehoods already disseminated – would be a good beginning.