There has been an uptick over the past year in “children skipping school,” the Wall Street Journal reports.

And that is where the problem begins. Because the article does not talk about “children.” It talks about teenagers, young adults. They are “adolescents,” the invented stage between childhood and adulthood which keeps teens in an oppressive purgatory.

And why are these “children” skipping school?

Greene County Career Center, a high school in Xenia, Ohio, dispatches a truancy interventionist to meet with students at home or in school to determine why they are missing classes. ”She has gone to work sites before, if she knows a kid is working,” said Jenny Adkins, the school’s supervisor of student services.

That’s it, let’s drag these “kids” away from work and back to school. Forget making money and building experience in the real world. Let’s keep the real world on hold so they can get a public education.

Especially ironic is that this particular school is called a “Career Center.” Nothing says career training like snatching a teen from work.

So the first problem is that teens are being treated like children. Some have made the choice to work, and the government forces them to attend school instead.

The second problem is that it is taken as a given that school attendance is positive. They act like just being inside a school building will magically educate students. That’s probably why so many people end up with jobs that require little more than a warm body sitting in a cubicle.

But schools are on a crusade to encourage attendance. Why? Because that is where the administrators’ incentives lie.

States typically fund school districts based on attendance, so school officials worry about losing money due to absent students.

“Truancy interventionists,” are simply bounty hunters for the school. They round up the escaped chattel and return them to their pen.

Of course, it is tempting to equate higher budgets with better education. But the data simply does not back this up.

Most of the ballooning school budgets go to administration. The chart below shows the increase in students, teachers, and administration since 1950. 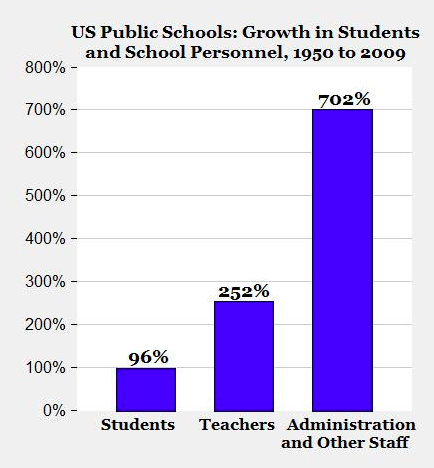 There are about twice as many students, and seven times as many administrators and other non-teaching staff.

From 1992 to 2009, students’ numbers increased 17 percent whereas administrators and other non-teaching staff rose 46 percent. And during that time, some states actually lost students yet kept hiring more non-teachers.

Of course, those hiring patterns might be warranted if students’ academic gains kept pace. Academic outcomes, however, have not experienced similar growth.

And here a more sinister view of public education emerges. Is it truly a misguided effort to educate the children? Or has it turned into another racket, where children are used as collateral?

Either way, the results of American public education are terrible for the teens forced into the system.

The PISA results indicate that scores are only slipping further since then.

And public schools are focused on attendance. They just want to make sure they round up all those run-away kids and lock them back inside their failing schools.

That is why these schools are worse than useless. Not only do they fail to educate students, they keep them from educating themselves, working, and gaining experience.

Whatever teens are interested in, that would be time better spent than in public school.

The Inkling of a Solution

Out of all this public school mess, there is one little tidbit from this article that points us in the direction of a solution.

Some students are homeless. They are embarrassed to come to school dirty, with unwashed clothes.

Some schools have got Whirlpool and others to donate laundry facilities so that students can do laundry at school.

If public schools could be replaced with optional resource centers for teenagers, that would be a massive improvement. Provide laundry, showers, and a safe environment. Teens, especially those in bad living situations, could go to learn on their own, or get help from the staff. Even provide certain meals. The cost would be less than public schools, and the benefit would be astronomically higher.

Look, anything the government does is going to be done terribly. It will be inefficient. The incentives will be aligned all wrong. And this solution would have those same flaws. But it would be an improvement.

Perhaps these “Charter Resource Centers” could be placed near some of the worst schools, and allow teens to opt out of mandatory school, and opt into this alternative. If the funding followed them, this might make a difference.

But the current public school system ruins lives. It destroys potential. It creates conflicts in society.

Skipping school is not a problem. It is the solution.