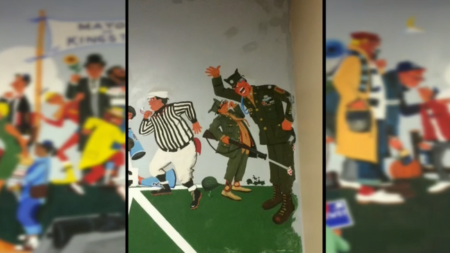 Just when you think it couldn’t get more bizarre… we give you this week’s absurdity.

Mural dedicated to WWII Vets cancelled for being too white

70 years ago, a decorated Veteran from World War II painted a mural on the campus of the University of Rhode Island to honor the fallen who lost their lives in the war.

The 95 year old artist is still alive today, to see his artwork being cancelled.

Students complained that the lack of diversity in the mural made them feel uncomfortable. There were too many white people depicted, and not enough minorities.

The university quickly bowed to the mob, covered up the painting, and plans to remove it entirely.

It’s ironic that in 2020, questioning the woke mob is liable to have you labeled a Nazi.

So a man who had the balls to fight the actual Nazis will have his memorial painting destroyed to appease the snowflakes who can’t even look at a painting without an emotional fit.

Former Marine commits suicide after the mob targets him

A Nebraska bar owner, Jake Gardner, was inside his bar when the windows were shattered by “peaceful protesters.”

Gardner, a former Marine who served in Iraq, went outside to try to diffuse the situation. He saw his father (a man in his 60s) shoved violently to the ground by peaceful protestors. But still, Gardner maintained his composure.

A video then shows that Gardner tried backing away from three men when they attacked him.

Gardner ends up on the ground, with an attacker on top of him. Gardner fired his weapon, and the attacker died.

The county prosecutor reviewed the video evidence and confirmed that Gardner acted properly and in self defense. The video confirms this. And he stated that he would NOT charge Gardner.

But the mob was not willing to accept this outcome. So they surrounded the courthouse and peacefully protested… at which point the Grand Jury caved and decided to charge Gardner with manslaughter.

This sadly appeared to put Gardner over the edge. And he took his own life last week.

Escaped Prisoner in UK tried to turn himself in seven times

An British inmate incarcerated in the UK recently escaped; apparently he was worried about his mother and wanted to visit her.

But once the visit was over, he was ready to go back to prison and serve out the remainder of his sentence.

So he went down to the local police station to turn himself in. But they refused to arrest him. It appeared there was no outstanding warrant for his arrest.

It took SEVEN tries before this escaped convict was able to successfully turn himself in to police.

Perhaps the cops were too busy trying to catch people illegally watching TV without a license (seriously, that’s a thing in the UK).

A homeowner in Michigan put a toilet on his front lawn, along with a sign that says “place mail-in ballots here.”

For anyone familiar with the debate about whether mail-in ballots increase voter fraud, the display is an obvious joke.

However the local election supervisor thinks it’s a crime, so she called the police to investigate.

She said, “It is a felony to take illegal possession of an absentee ballot… Elections in this country are to be taken seriously and there are many people who are voting by mail for the first time this election.”

Let’s hope that any eligible voter would not mistake the front yard toilet for an actual official ballot depository.

And if that’s the level of intelligence among voters, we have bigger problems to worry about.

New Jersey Doubles Down on Chasing the Rich Away

About 4 years ago, billionaire David Tepper left New Jersey and moved to Florida.

New Jersey instantly lost hundreds of millions of dollars every year in tax revenue just from this one guy.

Not coincidentally, 2018 was the same year that New Jersey hiked it’s income tax rate to 10.75% for those earning more than $5 million.

And now, with a massive government budget shortfall thanks to COVID shutdowns, New Jersey will double down on its bad idea.

They didn’t learn their lesson in 2018… so now the state will increase its tax rate to 10.75% for everyone earning more than $1 million per year.

Tased and arrested for not wearing a mask

An Ohio mother sat with her family in the stands at her son’s middle school football game.

They were outside, and a good 15 feet from any other fan.

But the school resource officer confronted the woman, and asked her to put a mask on.

She refused, citing asthma. She wasn’t sitting near anyone and was properly distanced, so she clearly posed no threat.

That really should have been the end of it. But instead the woman ended up being tased and forcibly removed from the stands.

Ironically the police officer had his mask hanging around his neck the whole time (instead of covering his nose and mouth), and another officer who also responded wasn’t wearing a mask at all.

In the end, it doesn’t even appear that the school’s mask mandate was legally enforceable. So they charged the mom with ‘trespassing’… at her son’s football game.