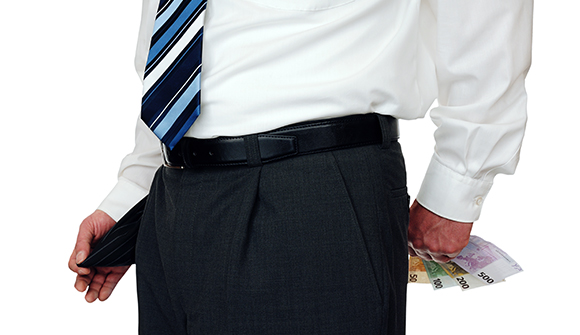 Air Force ballistic missile upgrade said to be stalled over cost … The U.S. Air Force’s program to develop and field an intercontinental ballistic missile to replace aging Minuteman III weapons is stalled over Pentagon concerns the service underestimated the cost by billions of dollars, according to a defense official familiar with the program. – Stars and Stripes

The Pentagon seems to be getting an attack of fiscal responsibility as we can see from the above article excerpt.

Only it is in the wrong direction.

The Pentagon is worried the US Airforce is underestimating how much its new intercontinental ballistic missile is going to cost.

As we write, the Pentagon is being exposed to significant negative media commentary regarding its inability to track upwards of $8 trillion of budgetary items.

Last week, we first touched on a topic which, in any non-banana republic, would be a far greater scandal than what Ryan Lochte may or may not have been doing in a Rio bathroom: namely, government corruption, falsification and potential fraud and embezzlement, which has resulted in the Pentagon being unable to account for up to $8.5 trillion in taxpayer funding.

Today, Reuters follows up on this disturbing issue, and reveals that the Army’s finances are so jumbled it had to make trillions of dollars of improper accounting adjustments to create an illusion that its books are balanced.

… The Army’s financial statements for 2015 were “materially misstated.” … “Forced” adjustments rendered the statements useless because “DoD and Army managers could not rely on the data in their accounting systems when making management and resource decisions.”

The initial story ZeroHedge refers to came from The Daily Bell (here), and while the lack of proper Pentagon accounting is a huge story, what is even bigger in our view is the constant fabrication of Pentagon technological successes.

Why purposeful? Because while NASA debunking of various aspects of technological successes are available on YouTube,  less attention has been paid to nuclear fraud.

What we’ve found in a number of months of examining Pentagon nuclear releases is that very few of them, if any, are “real.” Most of them appear to be considerably falsified. It’s not just enhanced graphics. It runs deeper than that.

How powerful are nuclear weapons really? And can they be used on a regular basis (here, here and here)?

If it were just NATO or just NASA, we might be able to accept that “rogue” elements were to blame.

But given the depth of obvious falsities when it comes to BOTH programs, one must begin to accept the obvious conclusion that the Pentagon’s misinformation is purposeful and amounts to a policy.

When it comes to nuclear test films released by the Pentagon over the decades, any unbiased observer who spends enough time with them will be forced to admit they are fake. Not just one or two, but very possibly ALL.

Even the most recently released film of a Bikini Island test seems obviously faked (here).

Reportedly, the Pentagon passed all of its nuclear film through its Lookout Mountain, Los Angeles special effects studio (here and here). But as stated, the fakery seems deeper than graphical enhancements of something with underlying veracity.

The NASA fakery is bad as well. The most obvious example we’ve been able to find is this vignette of an astronaut rising from the surface of the moon without using his legs (here at 2 minutes, 15 seconds). There certainly seems to be something pulling him up. Maybe a wire?

And then there is the issue of the first “lunar rover” which seems to have been built on top of the skeleton of a Willys Jeep – of the sort that was popular during World War II (here).

Ideally, one would be impressed by Boeing’s recycling of wartime materiel. But not when they billed fedgov some $40 million, reportedly, for its development.

And then there is the issue of the “destroyed” tapes of the initial moon landing. NASA explains that the footage was written over to save space (here). But later NASA released a “colorized” version of moon footage.

Actually, there was probably something on the original tapes that did not stand up to scrutiny in this YouTube era. Surely that’s obvious to anyone applying an ordinary level of skepticism to NASA’s explanation

Do we deny that NASA went to the moon or that nuclear weapons don’t blow things up? Why would we make such an incendiary statement? After all, you can fake some things without faking others. So we’ll restrict our stance to questions, many questions, not answers. And we are surely skeptical in general … on a variety of levels.

The main reason we are skeptical is because the Pentagon itself seems in charge of its narrative, certainly when it comes nuclear weapons and secondarily as regards NASA.

And now the military-industrial complex that runs the Pentagon wants a cool $1 trillion to “upgrade” the “nuclear triad” that supposedly protects America.

One might think in the current climate that the Pentagon would be leery of pushing forward with such extravagant numbers.

Let us for the moment restrict our questions to nuclear weapons.

Who supervises the Pentagon’s dollar estimates when it comes to nuclear weapons? Who certifies that the military industrial complex even delivers all the weapons that they say they are providing?

The Pentagon has been in charge of the nuclear narrative since before the announcement of the atom  bomb. During the entire process of building, testing and using the bomb, the Pentagon fed information to a single New York Times reporter who was later discovered to be on the Pentagon’s payroll (here).

Who had access to the Pentagon’s nuclear tests? Certainly real witnesses were not allowed. And even those who did witness the tests were kept miles away from the actual explosions.

And then there is this: A Hawaii “test” called Sailor Hat featured the explosion of 500 tons of TNT to mimic a small nuclear explosion (here). How many other times did the Pentagon use TNT or dynamite as a substitute for atomic explosions? More than once?

There is a theory that nuclear weapons can only be triggered at certain times of the year, depending on the sun’s radiation and other issues (here).

And there are even some who don’t believe in nuclear weapons at all (here).

The Pentagon is about to charge America $1 trillion for more of them. But where is the oversight – outside of the Pentagon itself – when it comes to these numbers?

And who is to say that the Pentagon is actually getting what it pays for?

How many of the missiles really work? They say they are “tested” but we can’t find a single test on film that looks legitimate. They’ve all been tampered with.

The Pentagon has lost track of some $8 trillion. And there is no way to tell, from what we can see, whether the Pentagon’s claims for its hugely expensive nuclear arsenal are true or not.

In three decades, from 1940-1970, the US government and the Pentagon discovered nuclear weapons and went to the moon.

Surely this constitute the single-most astonishing three decades in the history of humankind.

But how the US has stumbled since then. The government was unable to create a workable health care website. The Pentagon cannot keep track of small sums, let alone gargantuan ones.

For eight years we’ve run a publication that has reported daily on elite propaganda, the celebration of its authoritarianism, and the fakery of many elite themes including vaccines and “global warming.”

The Pentagon’s efficacy and the credibility of its NATO/NASA axis seem to us most questionable. Probably there is a good deal more falsity than anyone knows yet.

It is too bad that the US mainstream media – filled with people who have gone to school to learn their craft and then practiced it for decades – don’t apply more pressure to the Pentagon and to Congress as well.

Of course there is Reuters, which initially investigated the Pentagon’s corruption and just wrote about it again. In fact, Reuters unusual aggressiveness in this regard brings up another question. Is the US being purposefully destroyed by enemies both within and without? (See other story, this issue).

The current horrible election, the purposeful destruction of the dollar by the US’s own surrogates (the IMF and World Bank) and now the exposure of Pentagon corruption all give us pause to reflect.

Globalization is on the menu and the US may be a main course. The world has to be evened out, after all, if an international regime is to succeed. Does the destruction of the Pentagon’s reputation (deservedly so) ease the way for the UN? What other odd speculations can we suggest? Too many seem to verge on reality …

Conclusion: Nonetheless, the security of the United States – and the payments that taxpayers make to uphold it – is an important business. It ought to be conducted in a transparent and ethical way. From what we can tell, the Pentagon is a lot better at launching lies than nukes.