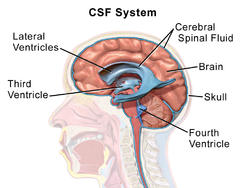 “As macabre as it sounds, science is beginning to discover that ‘youth transplants’ really can slow down the ageing process.

The fountain of youth, it seems, is youth itself.”

“Youth transplants” is a euphemism for sucking out the vital fluids of baby/child “donors” and injecting them into aging recipients:

“Although nobody is suggesting we siphon the bodily fluids of youngsters into our elderly… infusing cerebrospinal fluid of young mice into old mice improves brain function, a breakthrough.”

So, “nobody is suggesting” medically extracting cerebrospinal fluid from babies/children and injecting it into old (presumably well-paying) clients… except that’s precisely what they’re studying the feasibility of doing.

Biomedical entrepreneurs, in fact, are already cashing in:

“In 2019, a US start-up called Ambrosia that was offering teenage blood plasma to Silicon Valley billionaires for $8,000 a litre was forced to shut down…”

Where do you suppose that “teenage blood plasma” was sourced from? The wealthy children of DC elites, or some poor farmer’s daughter in a Guatemalan village, or the Compton streets, or some Appalachian township?

The FDA issued a warning against Ambrosia‘s services on safety grounds, but the founder re-opened after briefly shutting down, he said, with the simple justification that “our patients really want the treatment.”

The mega-rich can disrespect The Science© when they “really want” to harvest the blood of the global poor, but you can’t if you’re skeptical of experimental COVID-19 mRNA “gene therapies” marketed as vaccines.

Of course, this research is nothing new under the sun; it’s been quietly budding into a lucrative industry for years.

As one might expect, Bill Gates’ interest in the nascent industry has also been piqued.

Gates, the quintessential robber baron monopoly man in a non-threatening Mr. Rogers getup, loves nothing more than cornering the market on a valuable new biomedical commodity.

Previously, news of the elite-funded research into blood transfusions as the Fountain of Youth was relegated to the easily-dismissed fringes of journalism. “Respectable” outlets, in their own estimations, wouldn’t touch it.

Now the genie is out of the bottle. Corporate media like the Telegraph have made the editorial decision that it makes sense to mainstream the ideas that were once, although not altogether hidden, definitely outside of the purview of the public consciousness.

Exposing such research to public inquiry and debate before the time was right might have raised serious ethical pushback and threatened its development.

Remember back in the George W Bush days when stem cells were an issue of ethical contention? Look how far the contested ground has shifted.

This is called “moving the Overton Window” – shifting the bounds of consensus-driven ethical restraints slowly yet steadily. In this way, the biomedical corporate state avoids the pitfall of stirring enough popular unrest to derail their pet projects. Rather, it introduces these concepts on a controlled timeline.

The Telegraph piece gives away this rhetorical game in the last paragraph:

“It may only be a few years before ‘youth transplants’ move finally from the pages of gothic horror novels into the clinic. Whether patients will feel squeamish about such vampire procedures remains to be seen.”

Now that hiding this type of research from public inquiry won’t be logistically feasible much longer as it’s adopted at larger scale, the job becomes to normalize it.

The same corporate media now reporting on the blood harvesting phenomenon has long painted it as “conspiracy theory.”

The bottom-line takeaway here is that “conspiracy theorists,” once again — as was the case with lab-engineered coronaviruses to instantiate a global biomedical technocracy – weren’t wrong; they were ahead of their time.

First the corporate media ignores reporting inconvenient stories they’re not ready to introduce to the public, then they outright deny them and label journalists who discuss them “conspiracy theorists.”

Then, when they can’t deny anymore, they obfuscate to conceal the true agenda by positing other, purer, philanthropic motives.

In this case, the philanthropic motive offered to justify blood harvesting of the global poor for elite benefit is preventing chronic diseases like Parkinson’s:

“In the future, I hope we’ll find more ways to harness substances in our blood to reduce inflammation and promote healing… [it] could eventually allow us to do a better job of attacking the proteins that have been implicated in Alzheimer’s, Parkinson’s, and other neurodegenerative diseases.”
–Bill Gates Notes

That promise might prove true – for them. If the elite get their way, you’re never going to benefit from such research. You’ll always belong to the donor class, the experimented-upon – never the beneficiary.

Transhumanism is an infinitesimally tiny proportion of the population transcending its humanity by merging with tech while experimenting on the useless eaters and, when they’re done, exterminating the remainder. It is the future the likes of World Economic Forum envision.

We, the non-elites, are the unwitting clinical trial participants (which, without proper informed consent, is a Nuremberg human rights crime). Lab rats on a prison planet.

Time will increasingly reveal the truth. And more “conspiracy theorists” will be vindicated in the interim.