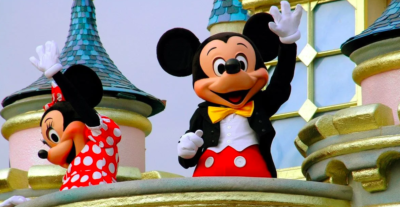 File this one away under “No sh*t, Sherlock…” In a yet-to-be aired interview with Axios HBO, Mark Zuckerberg states the obvious that, come election night in the Land of the Free, there most likely won’t be a winner declared because it will take days, if not weeks, to count all the mail-in ballots.

Moreover, says Zuckerberg, there is “a heightened risk of civil unrest” especially between the end of voting and the time the results are announced.

(And to be even more obvious, depending on who wins the Presidency, we believe the resulting civil unrest will make all the rioting we’ve seen so far in 2020 look like a picnic in the park… but that’s another story.)

There may be no other large corporation that’s more woke than Disney. The media giant has changed everything– its shows, movies, rides, and attractions, to conform to the Twitter mob.

Disney has now opted to remove the song “Zip-a-dee-doo-dah” from its Disneyland theme park.

Zip-a-dee-doo-dah was released as part of Disney’s 1946 film Song of the South… and as you can probably imagine, Song of the South didn’t handle the issue of race as delicately as it would be treated today.

(I mean, the movie title has the word ‘south’ in it, so it is automatically offensive to the Twitter mob.)

OK great. So the movie offends the Twitter mob. But Disney is cancelling a SONG that was part of the movie’s original soundtrack. WHY?

According to Disney’s official response, “The removal of the song from Downtown Disney’s background music is part of a continuous process to deliver an environment that features stories that are relevant and inclusive.”

What exactly are the lyrics of Zip-a-dee-doo-dah that make it so inflammatory?

“My oh my what a wonderful day / plenty of sunshine headin’ my way.”

Finally, the real source of domestic violence has been identified and eradicated.

The Twitter mob successfully secured the removal of a coffee mug from the British grocery chain, Sainsbury’s.

The mug featured a quote from the classic children’s book Matilda by Roald Dahl.

The mug said, “A brilliant idea hit her.”

After multiple Twitter-mobsters took note of the mug, the leader of a women’s group also got in on the action.

They claimed that the mug promoted domestic violence against women, because it could be read, “A brilliant idea: hit her.”

The grocery store apologized, and removed the mug.

Well done ladies! (But not in the cooked meat sense of the term.)

An Australian University is developing a technology that can identify misogynist and sexist Tweets.

Currently, Tweets have to be reported before they are deleted, which the team sees as a problem.

This technology will make it easier to censor the Tweets automatically– or at least send the Twitter mob after fresh victims.

Think of this as a way to automate the thought police, so that no stone goes unturned in identifying microaggressions. And in the future, it can be expanded to any woke principles that the Twitter mob sees fit.

Of course, the algorithm is only partially accurate. So the misidentified will just have to take one for the team.

For driving 9 km/h over the speed limit (about 5 mph) Germany usually issues a €20 ticket.

But when the automatic traffic cameras flashed to take a picture of the minor infraction, one man decided to flip it the bird.

The picture of him with his middle finger up made it to the German authorities. And they decided to fine him €1,500 ($1,775) instead, for the crime of being offensive.

He also had his license revoked for a month.

But at least he wasn’t caught walking his dog for only 59 minutes per day otherwise the penalties would have been even more severe!

Police in Victoria, Australia entered a pregnant woman’s home, handcuffed, and arrested her in front of her two young children.

It was all because of a post she made encouraging people to attend an anti-lockdown protest.

The woman was also served with a search warrant for her electronics.

The encounter was recorded until police apparently turned off the recording in order to seize the cell phone it was being filmed on. “Any device in the house, we’re taking,” the officer in the video says.

The woman was taken into custody, and charged with incitement.

It is a breach of law, under Covid rules, to gather in large groups. And encouraging people to break that law is also illegal.

It’s absolute insanity that this is where we are at.

The government can do whatever it wants to restrict the freedom of its citizens– right up to shackling and caging a pregnant woman, in front of her kids, over a Facebook post.

All in the name of safety from a virus.

Click here to read the full story and watch the video.