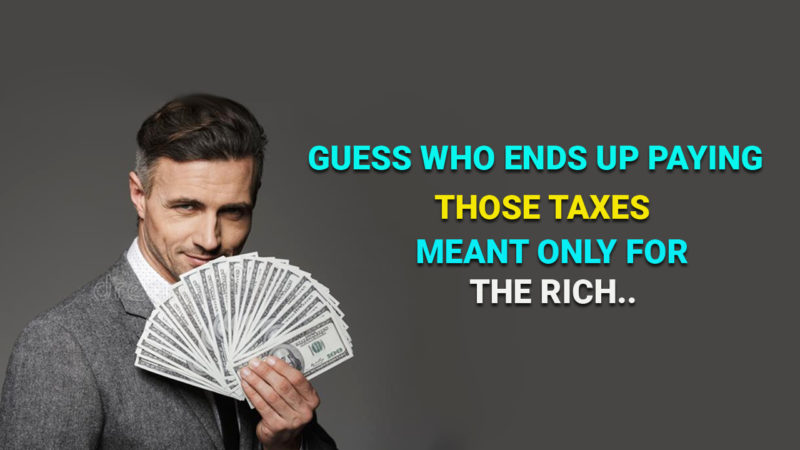 STAFF NEWS & ANALYSIS, Videos
Guess who ends up paying those taxes meant only for the rich…
By Joe Jarvis - August 25, 2020

Imagine starting a small business, working for yourself, or building a company from scratch in the USA in 1875.

With no corporate taxes, and no income taxes, you kept the full rewards of your risk and labor.

It’s not surprising that in about 100 years the United States went from non-existent, to having the largest economy in the world.

Unparalleled economic freedom helped create the industrial revolution which spurred legendary economic growth from 1870 through the turn of the century.

For most of the 19th century, the main source of tax revenue for the federal government was tariffs—taxes on imported goods.

Around the world, communist and socialist philosophies were spreading. Marx was a hero. The Bolsheviks would come to power in Russia in just a few years. And America was caught up in the same craze.

There were all these rich people in America now, and the politicians wanted them to pay their fair share.

The public was clamoring for a change.

In 1913, the 16th Amendment was added to Constitution, which allowed Congress to replace tariffs with an income tax as the main source of US federal revenue.

The first income tax code was just four pages long. And the top tax rate was 7% on income over $500,000—worth around $12 million today.

Plus, anyone earning under $76,000 (in today’s money)—which was most people—paid no income taxes at all. That’s how nice the tax code was.

The wealthy paid all the taxes, and the poor – even most of the middle class – paid none. People felt pretty good about that.

But it didn’t take long for things to change. Tax rates went up, the exemption fell, and debts mounted from the Great War (World War One).

(Two years earlier, President Roosevelt proposed a 100% tax rate to fund the war, arguing “no American citizen ought to have a net income, after he has paid his taxes, of more than $25,000 a year.” – about $300k in today’s money.)

At the same time, the exemption fell and lowest bracket tax rate spiked to 23% (a 23x increase).

So in today’s money, remember how everyone making $76,000 or less was entirely exempt from income taxes? Now income taxes kicked in at just $7,000. Those same people owed $15,870 to Uncle Sam.

In just a few decades, the income tax went from barely skimming from the richest of the rich, to confiscating almost a quarter of the middle and working class people’s income.

They start off only targeting the rich. But inevitably, rates go up, and everyone pays.

The Alternative Minimum Tax is another great example. The AMT originally targeted 155 people who were making over what today would be $1.1 million per year, but weren’t paying any federal income taxes because of loopholes and deductions.

But the tax was never adjusted for inflation.

By 2017, five million taxpayers were paying extra taxes because of the AMT, and more than half of them made less than $200,000 per year.

Today, people who are self-employed pay double the payroll taxes as typical workers. The government forces them to cover both the employee and employer contributions to Social Security and Medicare.

So the self-employed are out 15.3% of every dollar they earn before we even start talking about income taxes.

Now there are almost 42 million self-employed people in the US, but they only earn an average of $36,000 per year.

That’s what you get trying to stick it to the rich—ultimately sticking it to tens of millions of working-class Americans.

This is what ALWAYS happens… and here we are doing it again with our favorite socialists proposing sky-high taxes that will inevitably hit the middle class.

It’s now in vogue to endorse income tax rates of up to 70%– just for the rich of course! Don’t worry it won’t effect you… just like the original income tax

Others endorse an annual Wealth Tax on the total net worth of everything the rich own every year. At first, it will only affect people with more than $50 million in assets.  But don’t be surprised when the exemption creeps down, and inflation puts more and more people in that category.

Because the socialists talk about really soaking the ultra-rich billionaires by taxing inheritance. And then they introduce plans to start confiscating almost half the dead’s wealth at just $3.5 million.

That is not a lot of wealth to have accumulated over the course of a life of hard work, and being responsible with your finances.

Don’t worry, they tell us. If you’re not a multi-millionaire, this won’t affect you…

And that may very well be their intention. But rest assured something will change that. It could be expensive war bills, inflation, or a change in the tax code that alters how people calculate their assets and liabilities.

It always starts by targeting the rich… but taxes have always crept their way down to rob the middle class just the same as the rich.

Because it’s never enough. Even if you confiscated 100% of the wealth of every single billionaire in the USA, at current spending levels, it would run the US government for less than a year. Then what? It’s all gone.

Plus, the socialists don’t want to just stay at current spending levels. They have all sorts of ideas the imaginary endless wealth of the rich can finance.

Do you think if the people from 1913 could see America now, would they still vote for the income tax?

Probably not if they saw which people ended up with the burden.