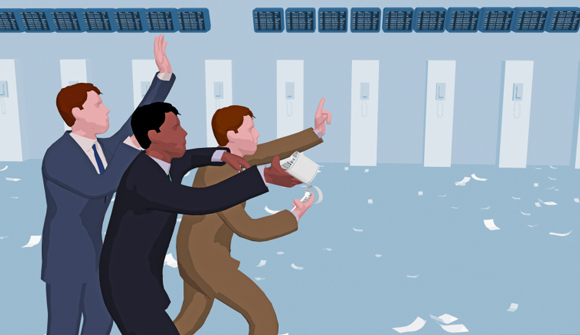 Spoofing trial to shine light on secret world of high-frequency trading … In less time than it takes you to read this sentence, Michael Coscia could make more money than most Americans earn in an 8-hour day. If you blinked, you miss it. But if you slowed down time … you'd see the unmistakable evidence of a sophisticated criminal at work, the feds say. That's because Coscia, 53, was allegedly a "spoofer," a high-frequency trader who used computer algorithms to rip off rivals in markets where business is conducted at the speed of light. His scam using huge spoof orders for commodities futures contracts to goose prices on the Chicago Mercantile Exchange netted him $1.6 million in just three months, according to a federal indictment, helping fund an anonymous but comfortable lifestyle that included a waterfront New Jersey mansion. Coscia, of Rumson, N.J., is due to find himself thrust into the public eye Monday when he becomes the first criminal defendant tried under anti-spoofing legislation included in the 2010 Dodd-Frank Act. – Chicago Tribune

Dominant Social Theme: Let's remove these criminals from the greatest markets in the world.

Free-Market Analysis: Here we go again. The sanctity of US markets is at risk. The free market has to be protected at any cost from the barbarians that seek to cause market failure.

Of course, there is no such thing as market failure. A market is merely a creation of participants that want to buy or sell. There can be no failure within this context. At worst, a transaction is not consummated.

But in our modern world there are plenty of market failures, or so we are told. And as a result, we have legions of highly paid regulators that monitor all sorts of commercial facilities for this ubiquitous "failure."

And now there is spoofing. This is a criminal activity because apparently the 2010 Dodd-Frank Act made it so, and now it is about to occupy the time of myriad business journalists who will scribble tens of thousands of words about the upcoming trial. (See article excerpt above.).

Expected to be closely watched on both Wall Street and LaSalle Street, the weeklong trial scheduled to start in federal court in Chicago is an important test of that law, which was also used to charge Navinder Sarao, the alleged spoofer authorities say is to blame for 2010's "flash crash."

That episode temporarily wiped nearly $1 trillion off the value of U.S. equities in a matter of minutes. Coscia's trial comes at a time of increased public scrutiny of high-frequency traders … The case also promises to shine a light on a secret world, one that accounts for about 50 percent of all trading volume and has helped mint the fortunes of some of Chicago's wealthiest and most generous political campaign donors.

How could a single individual, no matter how powerful, reduce Western market capitalization by US$1 trillion in a single day? For some reason Western media doesn't ask this question. The market's evolution around the world is simply assumed to be an organic activity, like the growth of a plant.

But it is not. There is a distinct invisible hand guiding securities marts – and it has nothing to do with competitive elements. For instance, after the Civil War, the New York Stock Exchange went on a buying rampage, rolling up dozens of small stock exchanges throughout New York.

The NYSE finally met its immovable object in the "uptown boys," as we have often related. The uptown boys had invented a constantly traded market that was attracting business away from the NYSE's twice-a-day auction market.

So desperate was the NYSE to merge with the uptown shop – and put them out of business – that it gave the uptown boys the monopoly rights to certain issuances. This provided the holder with a guaranteed income stream based on the constant trading fees. Eventually, the uptown boys gave in, journeyed downtown – and thus the specialist system was born.

The NYSE's specialist system was presented in the 20th century as a clever force for buttressing an orderly market, and indeed, that was what specialists were charged with doing. But the system – which never worked very well –was formed out of what can be clearly characterized as a bribe.

And so it goes. Securities trading is a business. The bigger it gets, the more lucrative it is for certain parties. And these parties are evidently not going to stop until every facet of trading around the world is included in a single marketplace.

Imagine the disasters that such a seamless digital market generates. Such large markets will inevitably provide the wherewithal for gains and losses that have little or nothing to do with what markets should generate, which is price discovery.

Already securities marts are far too big. They are entirely unnatural facilities that have been goosed by legislative favoritism and fattened by misguided regulatory authority.

Without the apparatus of legislative force and corresponding judicial decisions (also enforced by force), markets would gradually shrink down into smaller entities offering price discovery and modest transactional efficiencies.

Instead we have these titanic trading facilities that offer incredible riches for those who can master – even if for a short time – arcane trading software and its outcome, which is pattern analysis.

The unnaturalness of securities marts and especially stock markets is further abetted by the lunacy of central banking that regularly injects overwhelming amounts of liquidity into the economy via commercial banks and multi-nationals. A lot of this excess liquidity finds its way into stock markets, hyper-charging what is already a perfervid and unbalanced environment.

Given the entirely artificial nature of this "industry," it is not surprising that legions of regulators abet its expansion, especially during "bull market" phases.

The "crimes" that these regulators are looking for would not be feasible without the lunatic centralization of marts to begin with. Insider trading, spoofing and many other so-called manipulations are only possible – or at least worthwhile – because of the artificial nature of what has been designed and implemented.

Investors who look with suspicion at securities markets – and with good reason – might do well to examine what The Daily Bell has written about extensively in the past: pre-public offerings where trends impacting the given sector suggest long-term strength and viability. Anthony Wile wrote extensively about wealth creation through pre-public investing in his latest book, Financial Freedom (available to The Daily Bell Newswire subscribers for free download here.)

Within this context, what we call the "cannabis opportunity" is one such clearly evident option. Over the next few years, cannabis will grow into an industry worth tens of billions of dollars. The opportunity to participate alongside ground-floor entrepreneurs – and then profit from a variety of rollups and buyouts – is one option to consider for investors who don't want to risk their hard-earned savings in the big casino of Wall Street.

Many will watch the upcoming spoofing trial with bemusement, coming to the firm conclusion that marts, because of their size and intricacy, are simply not to be trusted. Indeed, in their current incarnation they are mysterious entities subject to a variety of artificial forces such as central bank money printing.

For some who understand the business cycle and have the wherewithal, stock market investing can certainly be lucrative. But for many others, private equity development may be the answer. The "big casino" is an uneasy place these days. It may reap you a fortune but it may also generate a great deal of indigestion. For a quieter and perhaps more lucrative alternative, you might want to examine pre-public issuances, especially in the cannabis sector.

The Daily Bell Newswire is dedicated to the coverage of certain potentially lucrative market trends including farmland, precious metals and, of course, the growing cannabis industry. With early-warning analyses that help you understand underlying market forces, the Newswire provides you insights that you may not find elsewhere. Not only that, but it's free! So give it a try. You are not likely to be disappointed.