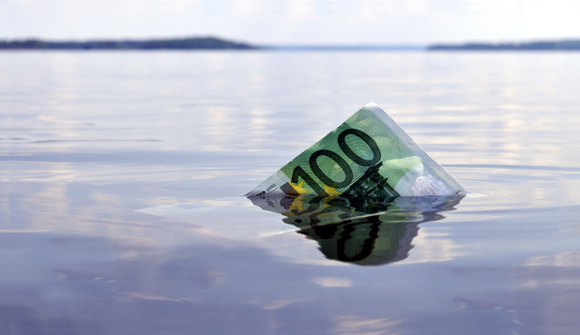 Robert Chote, the head of the Office of Budget Responsibility for the British Tory regime, claims the "British economy may never quite recover from a severe Euro collapse."

According to a UK Telegraph article, "Britain's economy may suffer 'permanent' damage and 'never quite get back up' if the euro collapses in a chaotic way.

This, according to the "Government's chief economic forecaster."

So much for the idea that Britain's right-wingers are dead set against the EU or the euro.

Smell the fear? The elites use dominant social themes – fear-based promotions – to push for world government. This comment from Chote is right in line with that.

He wants us to believe that a huge, centralized bureaucracy – the EU – is of the utmost necessity to British citizens. Here's some more from the article:

The senior Government economist, who has access to the most up-to-date Treasury data, said this could cause a recession as bad as the last one and "lingering, long-lasting effects" for Britain's public finances.

He said it could "permanently hamper the economy" in the worst case scenario, raising the prospect that Britain may never again see the same high growth it has had in recent decades.

The article also updates us on the latest fallout from the EU crisis:

* A row broke out over whether Angela Merkel, the German leader, has suggested Greece should hold a referendum on leaving the euro.

* European Union officials finally admitted they were drafting plans for how Greece could exit the single currency.

* George Osborne, the Chancellor, warned that the "storms" of a eurozone crisis are gathering again. He said there is a risk that Europe's "good work in building a stable financial sector and creating jobs and prosperity might unwind".

* Santander reassured its 25 million British customers that their money is safe, amid worries that its Spanish parent company is exposed to the eurozone crisis. The bank told worried savers calling its telephone helplines that it is an entirely separate entity and said only a small number of customers with very large deposits have started withdrawing cash.

* Francois Hollande, the French leader, said Greece must stay in the eurozone, as world leaders gathered for the G8 summit at US President's official residence Camp David. President Barack Obama said resolving the crisis is of "extraordinary importance" to the world.

* Shares on Britain's FTSE 100 index fell by 1.3 per cent to their lowest level in six months as concerns about the Greek and Spanish economies hit stock markets around the world. Five more Greek banks had their creditworthiness downgraded by the Fitch rating agency.

I won't comment on all of these points but in aggregate they do illustrate once again the folly of such kinds of financial engineering.

The EU worked better as a free-trade zone. It was when the European Central Bank was created and a number of countries ripped up their old-fashioned currencies that the real trouble began.

Notice, also, that Osborne is quoted as saying that the EU's current troubles might "unwind" its "good work in building a stable financial sector and creating jobs and prosperity."

Funny, the gentleman might have been able to make that case in 2007 before EU money printing – and the rigidity of the EU's monetary concept – had yet to take its toll. But how can one say that with a straight face today?

It is simply a fact that government itself creates little or nothing in terms of jobs or even prosperity. Certainly, in an environment of physical violence government can serve a purpose by protecting its citizens.

But ultimately "government" is we – and so it essentially comes down to the same thing. Either as a group or individually, people take what Ludwig von Mises called "human action" to better their circumstances and lot in life as best they can.

The idea that a trillion-dollar government located in Brussels and spewing both money (inflation) and regulations can substantially improve the economic conditions for individual people is surely questionable.

And we are asked, as well, to believe that MORE centralization shall cure what has already gone wrong. For this is where the EU is inevitably headed unless it falls apart.

The elites shall, then, have their super-state, but within the context of what has already taken place, one would predict that the larger and more centralized entity will contain within it the seeds of the EU's eventual destruction.

For those of us who believe that societies can be organized in a better and less intrusive way, the European Union will never be an optimal answer. If there must be government, let it rest lightly on shoulders of the people, allowing them to realize their own destinies – and successes and failures.

Chote seems to analyze economics as if it were some sort of rooted, architectural structure. But it's not. Economies are made up of people, and people cannot be subject to "permanent damage."

Allow people the latitude to create economies of lasting power and strength. Introduce market competition. Reduce regulation and taxation. The EU is actually moving in the opposite direction, unfortunately.

Right now, the various procedures being applied to the EU via austerity only perpetuate the misalignment of EU economic and monetary forces. It is the banks themselves – those that have lent badly and too much – that need to be allowed to experience the consequences of their actions.

This is the crux of the matter. Bureaucrats like Chote claim they are worried about the EU – but EU policies have made the super-state synonymous with banking interests.

Chote is therefore worried that the EU's top BANKS will be subject to permanent damage in the case of an EU collapse. This may well be true. But is that so terrible?

Once the top-heavy, mercantilist banking system of the EU finally collapses – or at least is forcibly downsized – the vitality of Europe's rich economic tapestry will reassert itself once again.

The Mediterranean countries will return to their more casual, service-industry oriented, entrepreneurial roots. The North of the Eurozone shall no doubt go on to bigger and better industrial triumphs.

Britain itself, with a smaller banking sector and a reduced City, would also benefit. Britain has gone through an expansive phase of bureaucratization and mercantilism. A downsizing would actually help Britain's struggling middle class and those who want to try new ventures.

A reduction is likely coming to Britain's – and the entire UK's – public sector regardless of what people like Chote think. Maybe that's what he REALLY fears.