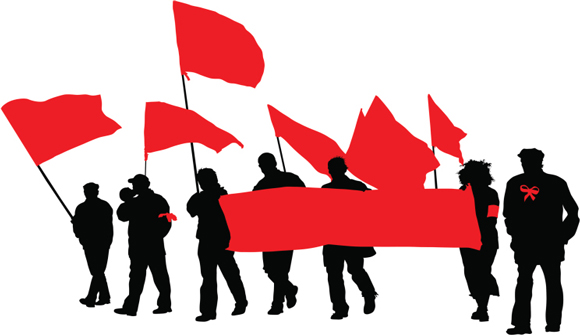 The unrest sweeping the world seems to be growing, and the Internet provides us with global updates cataloguing this powerful phenomenon. An article in AllAfrica.com "Uprising, Imperialism and Uncertainty," informs us that in addition to uprisings in Tunisia, Egypt and Libya, "protestors have taken to the streets in Zimbabwe, Senegal, Gabon, Sudan, Mauritania, Morocco, Algeria, Benin, Cameroon, Djibouti, Cote d'Ivoire and most recently in Burkina Faso and Swaziland." The protests in some cases have been single "days of rage," and in other cases have continued for days or even weeks.

These "color revolutions" will have a continuing economic, social, political and military impact around the world. While the long-term effects are likely – ironically – anti freedom, or mixed at best, the short-term impacts are substantial and often dismaying. Already, the unrest has pushed oil prices well above US$100 and there are some reports that traders are readying for US$175 oil. In this article, I want to try to put this spreading protest movement into context in order to isolate its ultimate impacts, both potential and realized.

We owe it to ourselves, our families and even our larger communities, to try to keep track of what's going on in the world and to try to sort out the real upheavals from the manipulated ones. The Western mainstream media will continue to support the fiction that none of it's manipulated, but that's simply not true. For those of us trying to understand the reality of the world today and the power elite's influence in it, unraveling this unprecedented wave of protests and potential regime changes Is most important.

The emphasis on "youth" and "youth frustration" reported as a underlying cause of these civil disturbances is telling, and indicates the extent of Western political and intelligence involvement. Certainly, Western government-sponsored Internet facilities have played a role in organizing these protests. Yes, Western fingerprints seem to be all over these color revolutions, as they have been, perhaps, for at least a decade or longer.

AYM, the worldwide youth protest movement inspired by the US state department, CIA and a variety of US corporatist interests, is surely involved in numerous revolutionary processes, as various alternative media outlets have reported. (Even the "signage" is the same in different countries, with the same iconic clenched fist rendered the same way.)

Because of continued coverage of violent actions in Libya and the Ivory Coast, it is understandable that those of us in the West might begin to believe that wider civic dissatisfaction in Africa and the Middle East has slowed or even ceased. Nothing could be farther from the truth. Food and energy prices are still going up and for the billions who live on tiny amounts of money each day, a few percentage points' rise can make the difference between survival and starvation.

Of course, food prices can be manipulated; and larger aspects of regime change can be as well. According to All Africa, "There are many similarities between the uprisings but also differences, often related the level of organising prior to the uprisings, for example the strength of trades union and student movements, political activism and so on; levels of repression and overall frustration of youth in particular with high unemployment and lack of freedom; the belief that civil disobedience can work; and the willingness to persevere not for days but for weeks on end."

And just as civil unrest rises, so strategies to counteract it proceed apace. Just the other day INTERPOL's Secretary General, Ronald K. Noble, called for standardization of electronic identification internationally to support "global security." This electronic document administered, of course, by INTERPOL would create a kind of universal passport that would allow travelers to go round the world using a single ID. What Noble either didn't say or wasn't reported was that a single electronic ID requires, essentially, a single, searchable database comprising some seven billion people (everybody on the planet).

The ability to extend the reach of law enforcement to every corner of the globe means that the state's larger ability to criminalize most every human activity is virtually unbounded. Even the most Draconian laws would tend to be enforced by INTERPOL as individual countries would want reciprocity. It is a recipe for the most profound kind of totalitarian implementations.

Whether the destabilization leads to regime change and qualitative upgrades in people's standard of living is another question entirely. All Africa reminds us that while "uprisings like the ones taking place in Africa at the moment often take place regionally, such as in Asia in the 1980s and 1990s – in Bangladesh, Taiwan, Indonesia, South Korea, Nepal, the Philippines, Burma, Thailand – and in Eastern Europe. It is also worthwhile considering the outcomes of these previous waves. In most cases there has been little real change in the power structures – different faces, same people.

The scaffolding of the New World Order continues to be erected. It is not coincidence in my view. George Soros is holding a New Bretton Woods Conference to come up with plans to create a new world currency. In the Hague, the International Criminal Court is beginning a trial for various Kenyan officials accused of "crimes against humanity" in 2008 post election unrest which took the lives of thousands and displaced hundreds of thousands. In Kenya, also, a new climate exchange facility has been established and will begin trading pan-African carbon credits. Meanwhile, the color revolutions grind on, implementing regime change that may lead to further Islamification of Africa and the Middle East and thus implementation of additional East/West tensions that lead in turn to further authoritarian policies that make it easier to implement the structures necessary to create One World Government.

There is pushback, too. As we continually point out, the 21st century is not like the 20th. It is very possible, thanks in large part to the Internet, that the citizens of developing countries and their leaders, especially, are more aware of Western manipulations these days and less likely to respond as expected. Ivory Coast President Laurent Gbagbo was supposed to cede power several days ago but he is holding out in a specially reinforced presidential bunker and just today his troops went on a counter-offensive, to the fury of the global coalition trying to force him out. UN officials (along with French ones), trying vainly to push Gbagbo into signing surrender documents, now claim that Gbagbo lied when he said he was ready for negotiations. Actually, he used the lull in fighting to reinforce his positions, they say.

In Libya, a color revolution was supposed to remove incumbent madman Muammar al-Gaddafi, but when the peaceful protest fizzled, the revolution turned violent. For a while it looked as if the ragtag revolutionary army would win the day; then the tide turned as Gaddafi fought back. Soon a UN resolution was passed and NATO was called in. Gaddafi's heavy military equipment including tanks were bombed and now the fighting has settled into a stalemate. Pentagon generals testifying before Congress have indicated that "boots on the ground" may be the only way to defeat Gaddafi.

In Afghanistan, as we reported recently, talks between various parties affected by the war including the Taliban themselves are apparently going to start in Turkey in earnest. The pacification of Afghanistan seems less assured now and its "Balkanization" even more feasible. Even Iraq, where the US was supposed to have achieved a resounding victory for democracy is destabilizing again with Sunni versus Shia violence on the rise and a government paralyzed for nearly a year now.

The various "divide and conquer" methodologies that the Anglo-American elites used with such devastating efficiency in the 1800s may be less effective in the 21st century. More people understand the elite's true intention and its manipulations as well. Certainly, we seem to have entered an era of enhanced elite activity aimed at creating increased global governance as destabilizations the world over indicate. But at the same time that effort may less assured than ever.

As responsible citizens, investors and parents, we need to watch unfolding events closely and take considered human action in our own lives to counteract the effects of whatever is occurring. In the 20th century, Western powers-that-be staved off market pressures with considerable efficiency. But the 21st century may mark the rise of marketplace power once again, with all its attendant ramifications. Revolutions far away may affect us, too. No man is an island, John Donne famously wrote. The bell, tolling, tolls for thee.