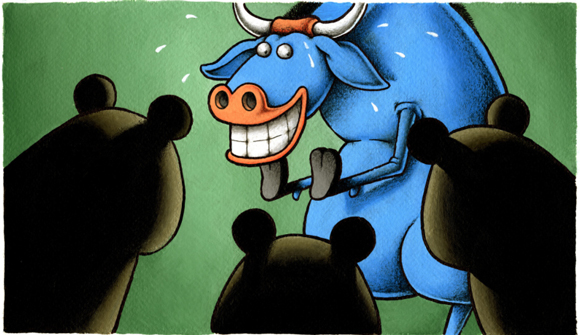 The Drudge Report yesterday carried two bearish articles about stocks. I'll comment on both of them – generally anyway – because they bear directly on the Wall Street Party now taking place – and on which we've commented extensively.

The first article carried a Newsmax byline and focused on the opinions of Robert Wiedemer, "an esteemed economist and author of the New York Times best-selling book Aftershock."

Wiedemar, we're told, forecast the puncturing of the 2006 housing bubble and is now prediciting, worst case, a 90 percent market decline.

Here's an excerpt from the Newsmax article:

In the interview for his latest blockbuster Aftershock, Wiedemer says the 90% drop in the stock market is "a worst-case scenario," and the host quickly challenged this claim. Wiedemer calmly laid out a clear explanation of why a large drop of some sort is a virtual certainty.

It starts with the reckless strategy of the Federal Reserve to print a massive amount of money out of thin air in an attempt to stimulate the economy. "These funds haven't made it into the markets and the economy yet. But it is a mathematical certainty that once the dam breaks, and this money passes through the reserves and hits the markets, inflation will surge," said Wiedemer.

"Once you hit 10% inflation, 10-year Treasury bonds lose about half their value. And by 20%, any value is all but gone. Interest rates will increase dramatically at this point, and that will cause real estate values to collapse. And the stock market will collapse as a consequence of these other problems."

And this is where Wiedemer explains why Buffett, Paulson, and Soros could be dumping U.S. stocks: "Companies will be spending more money on borrowing costs than business expansion costs. That means lower profit margins, lower dividends, and less hiring. Plus, more layoffs." No investors, let alone billionaires, will want to own stocks with falling profit margins and shrinking dividends.

Zimmerman is quite precise in his forecasts, explaining that the Dow Industrials "could still rally another 4% or so first, to a high around 17150, before the great reversal begins." Here's more:

For those who thought 2008 was the worst bear market they will ever see, just wait. "Based on our longer-term time cycles the present stock market rally must be considered the bubble to end all bubbles," Mr. Zimmerman wrote in a note to clients.

Despite the precision of his forecasts, we can see Zimmerman hedging in his last statement and indeed he should. It is impossible to time the market precisely and technical analysis is not by any means infallible.

Personally, I agree – and have stated – that the markets are considerably, fantastically overbought and that whatever happens after this "Wall Street Party" is going to be a sort of catastrophe.

But one could also argue it is foolishness to bet decisively against the top banking elites evidently organizing this latest, last blowout. We've analyzed what's been set in place and it doesn't seem to us that those behind this ploy are ready to declare it over, certainly not yet.

The groundwork has been laid, but there is much yet to reap.

What could slow the "party" or end it would be significantly higher interest rates; but central banks coordinated by the Bank for International Settlements have proven to be effective thus far at controlling dollar-reserve rates despite the torrents of dollars that have been printed over the past half-decade.

And it is not as if central banks have stinted on the money printing.

While the Fed itself has admitted to something like US$16 trillion distributed post-crisis, mostly in short-term loans (probably not paid back), the actual total is a good deal higher.

Close to five years ago, we estimated that central banks would probably print about US$100 trillion to try to prop up the failing system. We figure the total thus far is somewhere around US$50 trillion, though it could be higher.

The point is that despite these unimaginable sums, price inflation has certainly not reached hyper levels, though to be sure, the amount of price inflation is considerably understated.

There is no overriding certainty that central banks will lose control of their monetary base in the next month or even in the next year.

And if they begin to, there are always stopgap measures such as the US "plunge protection team" which can brazenly – and illegally – go into the market with freshly printed central bank money to stabilize it as necessary, at least in the short term.

At some point there will be a breakdown. Real market forces will reassert themselves. But "when" is not easy to discern. I personally know people who are continually trying to sell this market short and are surrendering over and over because the timing is not right.

The IPO market is revving up; top central banking doves are in place; the JOBS Act is ready to pour its promotions on receptive investors around the world; central banks are coordinating money printing in ways never seen before; gold remains down.

It is sensible to predict the demise of this empyrean equity fairy tale. But those elite bankers controlling the central banking money printing have different ideas. To sell THEM short is not a good idea, as they have proven to be both brutal and determined over generations and continue to have formidable weaponry that allows them to pursue their goals.

One can make the bearish case with ease in this illogical market. But logic may have little to do with it currently. And no one can say with any precision when a final crash may come.

For now, the punch bowl sits squarely in the center of the table. There may be a good deal of volatility associated with this "party" but I don't see any sign that someone intends to confiscate the booze as of yet. And market forces can probably be staved off for a longer time.

When I see something different, I'll be the first to report it. But I don't … not now, anyway. Maybe not for quite a while.