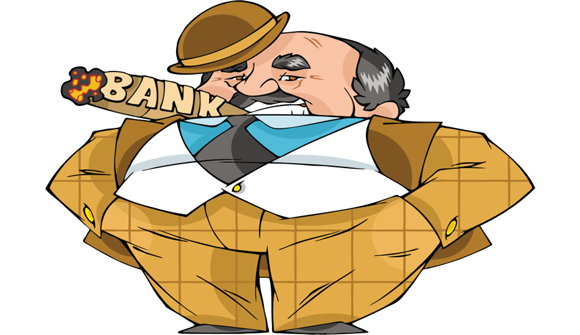 Can anyone stop the overweening lunacy of the banking oligarchs? No more than anyone can stop pythons from devouring rabbits at play. Our bankers are not honorable. They are not farsighted. And they have set in motion forces that no human effort can avert. Moreover they long ago formed a deathly co-op with history's most deplorable criminal element – the state. This has given them a free pass to indulge in ugly asset corpulence and hideous irresponsibility. It has hidden the true state of their criminality from realization by good men and women. The banking oligarchs and the power they have over us today are the result of a long train of poisonous ideas descending upon the American republic over the past 120 years.

It began with the coming of socialism to Europe and its Fabian migration to America at the turn of the century. Capitalism, the Fabians preached, is the root of all evil with its insistence on gold as money. Its freedom is no longer possible in the modern world. It brings to mankind uncontrollable booms and busts and horrific poverty. There is no cure for capitalism. It must be burnt at the stake of its egregious altar – free banking. Free banking is responsible for wild cycles, and gold stifles productivity when needed. Only by centralizing the great network of free banks that capitalism creates and shifting from rigid gold money to flexible paper money can abundance and stability be brought to modern life. Thus was ushered in America's reign of "easy money" with the inception of the Federal Reserve in 1913.

The Lure of Easy Money

Prior to 1913 we had resisted the lure of easy money, a curse that goes back to early civilization. Governments of history have always partaken in monetary debasement to create the illusion of prosperity. Our Founders realized this and preached against any kind of paper money. But their wisdom lasted only 125 years.

Easy money is like promiscuous sex. The two lures promise sensual delight and prosperity, and they do deliver such for various periods of time to their partakers. But ultimately they erode self-worth (for the female) and degrade the store of value that money represents for society. Bleakness and disaster are their ultimate denouements.

The media of the day, however, were eager to endorse this glorious shangri-la of perpetual prosperity that was sold to them as the Federal Reserve. "All progressive thinkers now realize," they hammered home to us, "that banking must be centralized and controlled in Washington. Only then can booms and busts be eliminated. Only then can true stable wealth be produced."

The fact that just the opposite has taken place over the past 100 years of this maniacal experiment in giving to government the power to create money escapes the awareness of pundits on the political left because clarity and reason do not move pundits on the left. Getting more out of life than they are willing to put in moves them. Denying the existence of Natural Law moves them. These two obsessions blind them to the irrational mega-statism that they so ritualistically worship in face of every problem that life thrusts upon us. Their worldview belongs to Alice in Wonderland. Words mean what they want them to mean. Objective reality is optional in their mind.

Because the pundits of the left have been taught the misconceptions of socialism, they fell prey to John Maynard Keynes in the 1930s who believed that capitalism had reached its "mature stage" and would never again be able to "generate sufficient demand." Thus it needed massive government intervention into banking and the creation of money by those in Washington.

But capitalism has no such thing as a "mature stage." It is eternally renewable as long as it is left free to recharge itself. The flaw in Keynesianism is that it was not capitalism that brought us the Great Depression; it was government intervention into capitalism via the Federal Reserve and its irresponsible inflation of the money supply that created a massive boom throughout the 1920s that had to eventually crack up and collapse.

All Keynesianism does is to exacerbate the normal cycles of laissez-faire and turn them into dangerous monster cycles via massive injections of credit, i.e., DEBT. If left on a gold standard, this cannot happen. Only the normal cycles of laissez-faire will come about, which quickly self-correct if left alone. Keynesianism is the classic case of government intervention creating economic distortions that it then uses as an excuse for more interventions, which then create more distortions. Eventually the distortions reach epic proportions such as we have today.

The solution is to restore a free market in banking. Take the control of money out of government hands and let the marketplace determine what is to be used. It will always pick gold and silver, which cannot be inflated and thus will not bring about massive booms and busts. Keynes was catastrophically wrong in thinking that gold and the free market caused the Great Depression. The cause was the paper inflation that came from the creation of the Fed in 1913. Numerous Austrian economists have demonstrated this quite brilliantly – Murray Rothbard in America's Great Depression and Ludwig von Mises in Human Action, for example. It is this crucial mindset that our intelligentsia must grasp if we are to get back to a free society and avoid the New World Order being prepared for us by the banking oligarchs.

The Tragedy of Modernity

Thus the tragedy of modernity. Political collectivists have swept over our country like a plague of infected rats in the days of Black Death. And they are destined to bring the same degree of upheaval to us that came to Europeans in the 14th century because of the rodents infesting their societies. Pathogenicity is not limited solely to physical life. It also plays a very prominent role in ideological life and comprises the evil factor in forming the tidal waves of history that sweep the shores of human endeavor over the millennia. The other side of the equation is that of salubrity and heroism which drive humans toward truth and propriety. Herein lies the great clash of good and evil that we find to be the metaphysical base of all meaning for our lives.

Unfortunately, the pundits of the left like Paul Krugman and Thomas Friedman, and talking heads like Chris Matthews and Rachael Maddow dominate the scene and are lost in the utter irrationality of their philosophical fundamentals learned long ago in the formative years of their Fabian youth. Together with the equally warped neoconservatives, they control ten times the air space that the American freedom movement controls. Thus the country drifts toward an apocalyptic collapse.

What is coming is the end of the world as we know it. There will be no recovery from the Marxian-Keynesian disease and its vast rodent spawn of minds like Krugman, Friedman, Matthews, Maddow and their 20th-century mentors. There will be only chaotic economic crashes mixed into a steady, drizzling dissolution of culture and hope, prosperity and faith, politics and freedom proceeding from now into an indeterminate future.

But out of every downfall comes the inevitable effort to right the requisites of existence. Humans are seekers of truth in the long run. They desire the good rather than the evil even though they get hypnotized by the latter for long stretches of time. So for those of us who grasp the overwhelming idiocy of the collectivist Weltanschauung, sanity drives us to seek out one of two avenues: 1) drop off the grid and find a safe haven to ride out the coming storm, or 2) attempt to forge a resistance movement to fight the purveyors of what surely will be a Tyrannical World Order foisted upon us by the banking oligarchs in the coming storm. Both avenues have their appeal. One's particular persona will dictate which is the preferred.

Nelson Hultberg is a freelance scholar/writer in Dallas, Texas and the Director of Americans for a Free Republic, www.afr.org. A graduate of Beloit College in Wisconsin, his articles have appeared in such publications as The American Conservative, Insight, Liberty, The Freeman, The Social Critic, The Dallas Morning News, and the San Antonio Express-News, as well as on numerous Internet sites. He is the author of The Golden Mean: Libertarian Politics, Conservative Values. Email: NelsonHultberg (at) afr.org