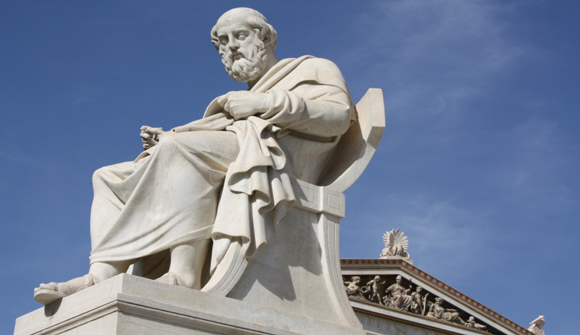 It's an amazing fact, but humans nearly always assist their oppressors by obeying them. And not only that, but they defend their obedience and persist in it, even as their oppression gets worse.

This week we'll examine one of the deep reasons why.

To Plato is given the praise of having perfected philosophy. – Saint Augustine

Toward the middle of the classical era (about 380 B.C.) the Greek philosopher Plato developed a new mysticism of the state. This formulation was of little effect upon the classical civilizations (since their formative stages were behind them) but its effects upon future civilizations would be profound.

The religions of both the ancient world and the classical world are often categorized as sympathetic magic. The central exchange of sympathetic magic is that by performing a sacrifice that is somehow parallel to what you want, you influence the gods to act sympathetically, using their vastly superior power.

Sympathetic magic appealed to those who were desperate (as higher beings always do) and to those who hoped for easy production – to get more than they had earned. This second reason was based either upon simple laziness or upon a lack of confidence in one's own abilities. Both are very common human traits.

Among the Sumerians, for example, farmers would have some sort of fertility ritual, which they hoped would influence the gods to act along with them, and to keep the earth fertile. By the time of the Romans (following the Greek discovery of science) this often became merely appeasing the gods, but the pattern did hold.

Plato began to teach in about 400 B.C., presumably as a student of Socrates. He had a strong affinity for governmental systems of control. Here are three of his thoughts on the subject:

Then first, we must set up a censorship over the fable-makers, and approve any good fable they make, and disapprove the bad; those which are approved we will persuade the mothers and nurses to tell the children, and to mold the souls of the children by the fables.

The guardians must allow no innovations in gymnastics and music against the established order.

Often the rulers have really to use falsehood and deceit for the benefit of the ruled; and we said all such things were useful as a kind of drugs.

You can see from these that Plato would have little in common with the early founders of Greece, Rome, or the first primitive agriculturalists – all of these people were most definitely innovators. He would, however, share a great deal of common interest with the rulers of Sumer in its later stages. And, of course, he has been much admired by ruling types ever since. It is true that Plato, being a very bright and thoughtful man, did develop some useful and even noble thoughts, but this championing of the lordship of the few over the masses remained his highest priority.

Another of Plato's primary teachings was that earth is merely a shadow of a higher, better, unseen reality. According to Plato, men should not waste their time addressing earthly things, but they should seek to conform their lives, and the world in general, to a heavenly pattern above1. This, he promotes, will be the great catalyst that raises man to the heights of prosperity and enlightenment. He famously explains this in his book, The Republic, which contains the following:

But the true earth is pure and situated in the pure heaven… and it is the heaven which is commonly spoken by us as the ether… for if any man could arrive at the extreme limit … he would acknowledge that this other world was the place of the true heaven and the true light and the true earth.

This idea of a heavenly world is very normal to us, but it was not so normal in the classical world. The Greeks, for example, described their gods as living high on an actual mountain named Olympus, not in a completely separate, higher realm. The idea of a separate world seems to have begun with the Hebrews, who placed their god outside of the visible universe. The ideas of the Hebrews were making their way through Greece by this time, so it is quite possible that Plato picked up this line of thought from them. But, regardless of source, it was Plato2 that more or less originated our idea of Heaven3.

Plato replaced the mythical gods of old with a mythic, ideal society. And this pattern of Plato's, as he spent a great deal of time explaining, was a city, a culture, the pure and perfect organization of human beings.

Plato replaced the mythical gods with a mythical society – a heavenly society. He created an ideal that said this: If you faithfully imitate the pattern above, you'll get the same benefits you sought from the gods.

Colors are brighter far and clearer than ours; there is a purple of wonderful luster, also the radiance of gold and the white which is whiter than any chalk or snow on the earth… and in this far region everything that grows – trees and flowers and fruits – are in a like degree fairer than any here. And there are hills, having stones … more transparent, and fairer in color than our highly-valued emeralds and sardonyxes. The people have no disease, and live much longer than we do, and have sight, and hearing and smell … in far greater perfection. They converse with the gods and see the sun, moon and stars as they truly are.

People reading Plato's description – as would be expected – began to yearn for it. The clear implication was that by imitating the perfect pattern above, the conditions of the heavenly state above would begin to appear in your earthly state. You would magically receive benefits… more than you had actually earned by yourself.

But this was not merely implied by Plato. He gets specific, writing:

The State, if once started well, moves with accumulating force like a wheel.

Our State, if rightly ordered, is perfect.

No State can be happy which is not designed by artists who imitate the heavenly pattern.

What has been said about the State and the government is not a mere dream, and although difficult, not impossible.

So, from Plato's time on, people took comfort in thinking that if their government was run properly, they would get more out than they had put in.

This line of thought remains with us, and we call it idealism.

Idealism functions on the instinctive hook of getting something for nothing. (Pay for a little bit, get the rest for free.) It implies someone taking care of you, so you don't have to be fully responsible. This is the political form of sympathetic magic, in which championing political ideas replaces sacrifice to the gods.

You can see how the formulations of the old gods and Plato's idealism are structurally the same:

Proper sacrifices gain sympathy from the gods and bring magic.

Right political positions cause harmony with the ideal and bring magic.

Following is a table, showing the relationships graphically:

No direct evidence was ever required for the old god formulation and none has been required of Plato.

Platonic societies ever since have featured the belief that, by grouping together and conforming to the ideal, people get more than they could on their own4. Accordingly, they labor long and hard to get others to join them in their political positions and symbolic acts. Their pursuit of symbolic acts is an effort to enhance the process by sacrificing to the ideal. Again, an appeal to sympathetic magic.

How different are we, really, from the ancients who made offerings to the gods of wind and rain?

1Specialists call this the Theory of Forms.

2Even in the Jewish scriptures, this idea was almost entirely absent. In those writings, the word "heaven" simply means the opening between the ground and the clouds, or as we might say, the atmosphere.

3Jesus never teaches Plato's Heaven. Instead, he talks of judgment akin to the type predicted by the prophet Daniel and of individual mansions as rewards to the just. Talk of a heavenly city comes later, first, abstractly and briefly via Paul and then, explicitly, in the Book of Revelation. But Jesus himself never really teaches this.

4Which is manifestly silly, since a whole can never be more than the sum of its parts. But, again, mathematics and logic (that is, science) were never part of such formulations.