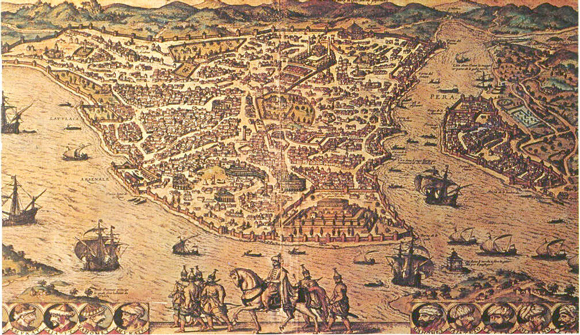 Rome, it must be said, adapted greatly as it failed. This rather begs the question of what types of ruling adaptations we will be seeing in the not-too-distant future.

THE CHURCH IS ESTABLISHED

Of course, Constantine hoped that his money problem would be partly solved by the Emperor gaining legitimacy as a Christian ruler. This did not occur immediately, however, since the changeover was difficult and very divisive, far more so than Constantine had planned.

It seems that Constantine was sincerely surprised by the divisions among Christians. It is certainly true that he worked long and hard to reconcile the various groups. He expended great effort to reconcile the Donatists and the catholics1, an effort that ultimately failed and required death sentences upon the Donatists.

At this time, "catholic" was only a descriptive term, meaning universal. This dominant group of Christians (who were, again, radically different from the primitive Christians of three centuries earlier) were also called "orthodox" at the time, which is not to be confused with the Orthodox Churches of the East. Again, this was more of a descriptive term than a formal name

Once Constantine understood the fractured and divisive state of Christianity, he moved fast and powerfully to unite it. At the council of Nicea, in 325, he more or less forced the attendees to come up with a unified Christian creed. Several hundred bishops from all parts of the empire met in the imperial palace for a month to reach their agreement. Constantine then went forth to enforce the creed upon the entire empire.

Here are some of the imperial edicts that empowered and unified Christianity as a single doctrine and established it as a single organization which was part of the Empire:

318 – Constantine gives Christians the right to take their cases before an ecclesiastical court rather than a secular court. The ruling of those bishops will carry the same authority as a secular court.

343 – Clergy and their servants shall not have to pay any taxes, or any new taxes in the future, nor shall they have to quarter strangers, and they shall be tax exempt if they start their own businesses.

349 – Clergy are exempted from all compulsory public services and municipal duties. Their sons should continue in the clergy unless obligated by service in the Senate.

355 – Bishops shall not have to appear before secular judges; accusations against them shall be brought before other bishops.

394 – Heretics are forbidden to teach their doctrines or appoint priests or other clergy. Judges and other officials must enforce this law.

395 – All pagan festival days are declared non-holidays. No one is permitted to perform a pagan sacrifice.

395 – Anyone who disagrees with the Catholic Christian Church even on a minor point of doctrine is considered a heretic.

396 – Local leaders and officials are not to be selected from the Alexandrian craft-guildsmen unless they are Christians.

398 – Eunomians and Montanists (non-conformist Christians) are to be expelled from the cities, and if they reside in the country and hold assemblies, they are to be deported and the owners of the land punished. Heretical books are to be destroyed. Those who refuse to surrender such books are to suffer capital punishment on the charge of sorcery.

408 – Laws in place against Donatists, Manichaeans and other non-conformist groups remain effective. Prosecution against them must continue vigorously.

409 – Only orthodox Christians may be appointed as defender of a city, with the bishop and clergy joining the distinguished citizens in making the appointment.

412 – Anyone who hides a Pelagian (non-conformists, again) will suffer the same penalties as a Pelagian. St. Augustine is authorized to publicize the penalties for Pelagians.

425 – No spectacles in honor of the emperor are to take precedence over worship of God.

It can be seen from this list that the Empire made great efforts to establish the church not only as a state religion, but as a secular power as well. ("Secular" means pertaining to worldly things. Secular power is governmental power.) This development was erratic but especially powerful under Theodosius II (emperor from 408 to 450), who seems to have finished the job with a great deal of violence.

This distribution of power to approved Christians only created further problems within Christianity by inducing Christians to fight for position. When proper doctrine is rewarded with money and power, these are the things that people fight over. Once such battles are underway, the only thing that can stop them is a central strongman that cannot be overcome. This was probably the driving force behind the papacy, which was alien to Christianity before this time.

Realizing that the Western Empire would not be saved, even with Christianity, Constantine moved the capital to a new city at the east end of the Mediterranean in 330. The city was built around a small, old town called Byzantium, and it was renamed Constantinople; it was also called New Rome. This city was positioned astride the trade routes between East and West and was ideally suited for defense.

In his new capital, Constantine stabilized the coinage and made changes to the structure of the army. This allowed the Empire to recover much of its military strength and to enjoy a period of stability and prosperity. The barbarians were primarily in the West, not in the East. That gave the new imperial center in the East some breathing room.

This modified version of the Empire welcomed trade. The state strictly regulated all trade, but allowed it to exist and to expand. The Empire, seeking to maintain control as all governments do, demanded a monopoly on the issuance of coins, controlled interest rates and controlled the activities of guilds and corporations. There were price controls from time to time, especially on grain.

As in the West before the collapse, surplus was removed from the farms and from individuals and passed to New Rome, where it was spent as payments to politicians and the military, for free food distributions, or for public works and monuments.

It is important to understand that the people in the East did not have the old Roman foundation of distributed power and virtuous living. They were children of the Empire, and did not know the virtues of the now-ancient Republic. But the old agricultural virtues were not critical for a trading empire. And, more importantly, the people of the East felt deeply honored that they had been chosen as the new center of the Empire. They would be the new, improved Empire. In response to this honor, they gladly amplified the glory of Rome. To praise Rome was now to praise themselves, and few men shrink from such opportunities.

As New Rome was established, part of the Roman aristocratic class left Italy and came to the new seat of power, followed by many of the artists and craftsmen. The eastern, "Greek" half of the empire, based in Constantinople, was never the power that the original Rome was, but it did survive, more or less, until 1453. During the latter portions of this time, it was known as the Byzantine Empire.

1At this time, "catholic" was only a descriptive term, meaning universal. This dominant group of Christians (who were, again, radically different from the primitive Christians of three centuries earlier) were also called "orthodox" at the time, which is not to be confused with the Orthodox Churches of the East. Again, this was more of a descriptive term than a formal name