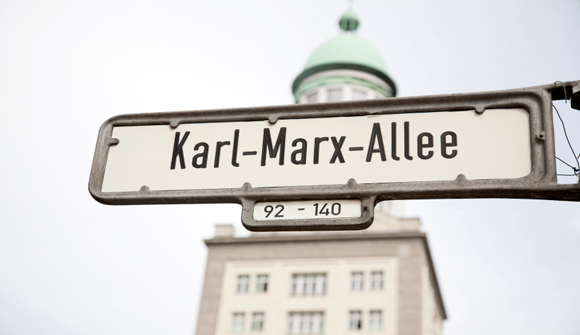 EDITORIAL
Karl Marx, the Once 'Anti-Communist,' Who Brought Socialist Ruin to the World
By Richard Ebeling - May 09, 2013

Karl Marx was born on May 5, 1818 in the German Rhineland town of Trier, and died on March 14, 1883 in London. It is worth recalling, also, that there was a time when Marx was an anti-communist.

It is said that by its fruit you will know the tree. The last one hundred years is a clear testament to the consequences of Marx's influence on modern history.

Accepting the "classical" labor theory of value, he concluded the workers were "exploited" by the "capitalists." Marx claimed that "profit" was a portion of the workers' output extracted by the property owners as the "price" the workers had to pay to have access to the privately owned physical means of production, without which they could not produce and survive.

The Austrian economist, Eugen von Boehm-Bawerk, in Capital and Interest (1884) and Karl Marx and the Close of His System (1896), demonstrated that Marx had confused "profit" with "interest." In a competitive market, profit is a temporary discrepancy between selling price and costs-prices, eventually competed away by businesses bidding up wages for workers (and other resource prices) to work for them, and those same businesses then competing for consumers to buy their output by offering their wares at better selling prices than their rivals.

What Marx had failed to fully understand was that production takes time, and that if workers would not or could not wait until the product was finished and sold to consumers to receive their wages, then someone had to "advance" those wages to them over the production period.

That, Boehm-Bawerk showed, is what the employers did, so that what workers received while working was the discounted value of their marginal product. The "gain" received by employers over their costs of production, even in long-run equilibrium, was the implicit interest for having "waited" for the product to be finished and sold, when they might have done other things with the "savings" they had advanced to those workers during the period of production.

If it is recognized that "time" has value, and, therefore, an intertemporal price, the notion that workers were or could be "exploited" in open, competitive markets for resources and finished goods was fundamentally wrong.

On this foundation of sand, Marx constructed his theory of the "injustice" of capitalism that has, in various forms, continued to plague the ideas and policies of countries around the world.

In the 20th century, it inspired the communist revolutions that led to the deaths of tens of millions of innocent men, women and children. For those not aware of the magnitude of this human catastrophe, I recommend The Black Book of Communism (1997), written by former French socialists and "fellow-travelers, that tells the horrific tale of "socialism-in-practice," wherever those guided by Marx's ideas came to power.

Or Paul Hollander's edited volume, From the Gulag to the Killing Fields (2007), that brings together excerpts from the personal accounts of those who lived through the "building" of the brave new worker's paradise, with all their tragic details about the fate of those considered "enemies of the people," or merely expendable cogs in the wheel of socialist central planning.

Many on the "left" have tried to rationalize away Marx's responsibility by arguing that these policies and practices were not what Marx "really meant." But it was Marx who, in Critique of the Gotha Program (1875), called explicitly for the "Dictatorship of the Proletariat" in the "transition" stage of socialism leading to the final historical epoch of post-scarcity communism.

The socialist state would implement all the elements of the modern welfare system. And it was Marx who called for the socialist central planning system to replace the "anarchy" of decentralized market competition, and therefore required the socialist state to become the most powerful of all monopolies over everything and everyone.

Nothing that Lenin or Stalin implemented in Soviet Russia or Mao in China, for example, was not called for or implied in Marx's own writings and arguments. For the socialist horrors of the 20th century, there is only one verdict to be pronounced against Marx: guilty as charged.

The heart of Marx's hatred for capitalism was his belief that it was the highest stage of an "alienating" division of labor, in which the worker was separated from ownership of the tools with which work was done, and separated from other workers by each specializing in different lines of production.

His wistful "golden age" was that ancient primitive time when mankind existed in small, collectivist bands — living in common, working in common, sharing in common. The individual was inseparable from the tribe, and the tribe enveloped the individual totally with no life, existence, or meaning outside of "the group."

The idea of the distinct and unique, and self-motivated and self-interested individual was the essence of a corrupt and immoral society, in Marx's eyes. And the historically "inevitable" coming of socialism and communism would once again confine the individual human being within the tightly woven tapestry of a collectivist society.

But it should remembered that there was a time before Marx was, well, a "Marxist." In October 1842, when Marx was the editor of the Rheinische Zeitung [Rhineland Times], he wrote in an editorial:

"The Rheinische Zeitung . . . does not admit that communist ideas in their present form possess even theoretical reality, and therefore can still less desire their practical realization or even consider it possible."

Tragically for mankind, rather than continuing to consider communist ideas to not possess any "theoretical reality" and to be not desirable in "practical realization," in a few years Marx built up his own presumed version of a "scientific socialism" that when brought into "practical realization" resulted in nothing but death and misery for untold millions around the world.