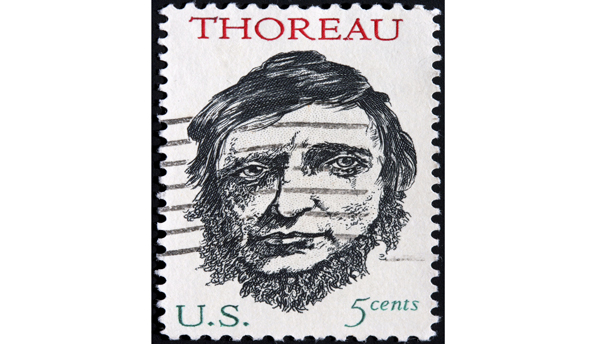 Murray Rothbard used the "lone crazy" theory to describe the individual who comes out of nowhere and dramatically alters the course of history; perhaps he assassinates a president. The lone crazy could also be an event, such as 9/11. Its essence is surprise, improbability and its transformative nature.

The essay "On Civil Disobedience" (1849) by Henry David Thoreau is the literary equivalent of a lone crazy. It recounts his one-night imprisonment for refusing to pay a tax that would have financed the oppression of other human beings – specifically, slaves. It was one man's statement of "no, I will not participate in evil." The essay should not have occasioned a second glance. And, yet, its impact reaches across centuries to the present day. It crossed cultures to change the thinking of such pivotal figures as Leo Tolstoy, Mohandas K. Gandhi and Martin Luther King. Why?

It is a short essay, written by a man who wandered obscure forests, died too young at the age of 44 and published only two books in his lifetime. Both recorded nature: Walden, or Life in the Woods and A Week on the Concord and Merrimack Rivers. The essay that put Thoreau on the political map was published only after his death. His sister Sophia prepared Thoreau's uncollected works for posthumous volumes by Ticknor and Fields. She held the political essays until last and, even then, they appeared to be awkwardly added on to the volume entitled A Yankee in Canada with Anti-Slavery and Reform Papers (1866). This volume included "Civil Disobedience," which had been retitled "On the Duty of Civil Disobedience."

In 1890, the famous publisher Henry Salt issued a collection of Thoreau's political essays, which included "Civil Disobedience." Decades later, it was read by a young Indian lawyer in South Africa who was sitting in jail because he protested the government's treatment of immigrant workers. He was Mohandas Gandhi. In Thoreau, Gandhi found the approach he would use in the subsequent struggle for Indian independence. Years later, he thanked the American people, saying, "You have given me a teacher in Thoreau, who furnished me through his essay on the 'Duty of Civil Disobedience' scientific confirmation of what I was doing in South Africa." By embracing Thoreau's message and by expanding the strategy of civil disobedience, Gandhi focused world attention on the shy Yankee philosopher who lived without fame in his own nation, in his own time.

The tremendous power of one short essay lies not merely or, perhaps, primarily in its message, but in its emotional content. "On Civil Disobedience" is an analysis of an individual's relationship to the state but it is also Thoreau's extremely personal response to being imprisoned for refusing to pay a tax. Understanding the powerful impact of the essay requires a glimpse into his underlying philosophy.

Thoreau was an integral part of a philosophical movement that was influential in its day. During the early 19th century, New England was the center of an intellectual movement called Transcendentalism. In 1834, while Thoreau was a student at Harvard, the leading philosopher of Transcendentalism moved into his home village of Concord. That man was Ralph Waldo Emerson.

There has never been rigorous agreement on the definition of Emerson's Transcendentalism, partly because Emerson was not a systematic thinker. The philosophy emphasized idealism rather than materialism; it viewed the world as an expression of spirit and every individual as an expression of a common humanity. To be human is to be born with moral imperatives that are not learned from experience but which are discovered through introspection. Therefore, everyone must be free to act according to his conscience in order to find the truth buried within.

If it is possible for one word to summarize a man, then that word would be the advice he offered in Walden: "Simplify, simplify." Thoreau was a self-consciously simple man who organized his life around basic truths. He listened to the inner voice of his conscience, a voice all men possess but few men follow. As he explained in Walden,

To be a philosopher is not merely to have subtle thoughts, nor even to found a school, but so to love wisdom as to live according to its dictates, a life of simplicity, independence, magnanimity and trust. It is to solve some of the problems of life, not only theoretically, but practically.

Thoreau's attempt to apply principles to his daily life is what led to his imprisonment and to "Civil Disobedience." But, oddly enough, his contemporaries did not see him as a theorist or a political radical. Certainly Emerson disagreed with Thoreau's imprisonment. According to some accounts, Emerson visited Thoreau in jail and asked, "Henry, what are you doing in there?" Thoreau replied, "Waldo, the question is what are you doing out there?" Emerson was "out there" because he believed it was shortsighted to protest an isolated evil; society required an entire rebirth of spirituality.

Emerson missed the point of Thoreau's protest, which was not intended to reform society but was a simple act of conscience. If we do not distinguish right from wrong, Thoreau argued that we will eventually lose the capacity to make that distinction and become, instead, morally numb.

Near the end of his life, Thoreau was asked, "Have you made your peace with God?" He replied, "I did not know we had ever quarreled." For Thoreau, that would have been the real cost of paying his poll tax; it would have meant quarreling with his own conscience, which was quarreling with God. He did not spend a night in jail as a way to reform society but in order to save his soul.

"On Civil Disobedience" may be a lone crazy in terms of literature. But Thoreau was not a lone crazy. He was a lone sane one. And his simple, simply-stated truth resonates in the hearts of generations and across cultures for no other reason than it is true. The price of harming others is losing your soul.