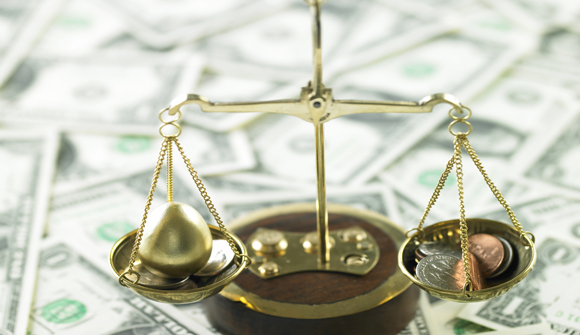 Gold's fair value is $800 an ounce … Gold's bear market is just beginning. That's the depressing assessment from Claude Erb, a former commodities portfolio manager for Trust Company of the West, and co-author – with Campbell Harvey, a Duke University university finance professor – of an academic study from last June that is looking to be increasingly prophetic. – Mark Hulbert Digest

Free-Market Analysis: Claude Erb and Campbell Harvey figured out the ratio between the price of gold and the stated price inflation from a historical perspective and determined gold was over-priced based on their numerical analysis.

Mark Hulbert writes about this analysis and also talked to Erb to see if he had changed his mind. In an article, excerpted above, Hulbert recounts his conversation as well as the news that Erb firmly defends his forecast and predicts continued loss-making for gold.

As a paper that analyzes the dominant social themes of the elite, The Daily Bell doesn't wish to take a position on a specific numerical analysis regarding gold.

However, one question regarding this analysis would be, what figures did they use? Historical numbers for price inflation – certainly in the US – are surely unreliable. US officials are constantly tinkering with the way to define price inflation and part of this effort is to minimize the amount of price inflation recorded.

Thus, to use US – or European – price inflation indices is probably inaccurate to begin with. The methodology that Erb used, however, is only referred to briefly in the article. Here's more:

The authors calculate that gold's fair value is close to $800 an ounce. Though many of gold's true believers were inclined to dismiss such a bearish projection when their study came out, it's beginning to be taken a lot more seriously: Bullion's recent slaughter has eliminated more than 40% of what a year ago they concluded was bullion's overvaluation — including $240 over the last week alone.

These developments prompted me to check in with them to see if these recent developments had in anyway softened their bearish assessment. No such luck. On the contrary, Erb told me Monday morning, he thinks it is unrealistic to expect gold's decline "to play itself out very quickly." …

The "Denialists are like those in 2007 who thought real estate would go up forever, or Jim Glassman's famous book at the top of the Internet Bubble projecting DJIA 36,000." Erb continued that these institutional investors and hedge-fund managers in coming days will have a lot of explaining to do with clients for why they didn't anticipate gold's plunge — and to convince those clients in any case why they should continue to invest in gold.

… To come up with an estimate of gold's fair value, they calculate a ratio of gold to inflation going back as far as they were able to obtain data. They report that this ratio b… is about 3.2-to-1. Even at $1,400 Germany's support for the euro an ounce, this ratio stands at 6.03-to-1, or nearly double this average.

… Erb said that gold's recent plunge is the all-too-predictable result of an asset whose price has become disconnected from fundamental value. While he allowed that gold could very well stage a powerful rally from here, he predicted that its final bear-market low will be a lot lower.

Hulbert mentions that Erb took inflation misreporting into consideration when coming up with his ratio. But even if he did so, other questions arise. There is plenty of apocryphal evidence that strong gold-buying demand exists, especially out of China and India.

We know of several gold buyers who have been trying to add to their stock of late but cannot find any gold to buy. The major centers of physical gold selling, according to these sources, claim they have neither gold nor silver and will not even take orders because they cannot currently "source" the gold.

So why would the price of gold have moved down so hard recently? And why did the gold price cease to climb relative to fiat? Some say it is illegal "naked shorting" that is weighing down gold. Even if the physical demand exists, the ability of other players in the market to sell short paper gold offers a powerful anti-gold strategy.

As we've pointed out numerous times, gold is regularly attacked by central bankers who see the holding of gold and silver as a diminishment of the power of fiat money controlled by them. The impulse is to lower the price of gold and keep it down.

For this reason, the price of bullion alone among commodities, from what we can tell, is still fixed by a British consortium twice a day. There is no reason why gold's price should not be determined by the market but apparently it is not.

There are many anomalous reports swirling around the price of gold – and silver too. It is obviously (in a sense) a controlled market but whether this control translates into longer-term manipulation (in today's fevered environment) is a more important, and less easily answered question.