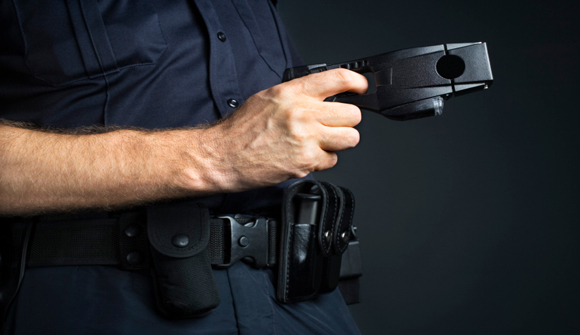 I'm a cop. If you don't want to get hurt, don't challenge me. It's not the police, but the people they stop, who can prevent a detention from turning into a tragedy … No officer goes out in the field wishing to shoot anyone, armed or unarmed. And while they're unlikely to defend it quite as loudly during a time of national angst like this one, people who work in law enforcement know they are legally vested with the authority to detain suspects — an authority that must sometimes be enforced. – Washington Post

Dominant Social Theme: The reality of law enforcement is that people are going to get hurt. Stay out of the way.

Free-Market Analysis: The author of this recent editorial in the Washington Post is Sunil Dutta. The Post tagline describes him as "a professor of homeland security at Colorado Tech University [and an] officer with the Los Angeles Police Department for 17 years."

This is Officer Dutta's context – where he's "coming from" in common parlance. Here's more:

Regardless of what happened with Mike Brown, in the overwhelming majority of cases it is not the cops, but the people they stop, who can prevent detentions from turning into tragedies. Working the street, I can't even count how many times I withstood curses, screaming tantrums, aggressive and menacing encroachments on my safety zone, and outright challenges to my authority.

In the vast majority of such encounters, I was able to peacefully resolve the situation without using force. Cops deploy their training and their intuition creatively, and I wielded every trick in my arsenal, including verbal judo, humor, warnings and ostentatious displays of the lethal (and nonlethal) hardware resting in my duty belt.

… Sometimes, though, no amount of persuasion or warnings work on a belligerent person; that's when cops have to use force, and the results can be tragic. We are still learning what transpired between Officer Darren Wilson and Brown, but in most cases it's less ambiguous — and officers are rarely at fault.

When they use force, they are defending their, or the public's, safety. Even though it might sound harsh and impolitic, here is the bottom line: if you don't want to get shot, tased, pepper-sprayed, struck with a baton or thrown to the ground, just do what I tell you. Don't argue with me, don't call me names, don't tell me that I can't stop you, don't say I'm a racist pig, don't threaten that you'll sue me and take away my badge. Don't scream at me that you pay my salary, and don't even think of aggressively walking towards me.

… We have a justice system in which you are presumed innocent; if a cop can do his or her job unmolested, that system can run its course. Later, you can ask for a supervisor, lodge a complaint or contact civil rights organizations if you believe your rights were violated. Feel free to sue the police! Just don't challenge a cop during a stop.

Some would argue with Dutta's perception that the US justice system is one where you are "presumed innocent" – especially when it comes to confrontations with police.

The police, after all, are inextricably linked to courts at all levels of governments. The ins and outs of the judicial system are well known to them and many in the system are friends and acquaintances. The idea that this is a level playing field for civilians and law enforcement professionals seems to us a tad, well … naïve.

In fact, when it comes to confronting law enforcement it's probably a wonder the system works at all. There are plenty of impediments to confronting officer misconduct from a civilian point of view. In fact, pre-Internet it was probably pretty much impossible.

Post-Internet, the odds have changed. The combination of digital documentation and Internet exposure is a fairly formidable one. It is difficult for even the most cynical police agent to continue with business as usual when faced with YouTube videos graphically illustrating his or her unprofessional conduct.

Not surprisingly, this article elicited a good deal of pushback in feedbacks.

•Dutta is likely angling for admiration and accolades from his peers and a promotion in the future. Such a blindly egomaniacal self serving opinion piece can have little other intent. And "Professor of Homeland Security"? What is this – the University of create your own department?…

•Clear, it's the dead person's fault. An unarmed person is dead – cannot be my judgement. Cannot be my trigger-happiness. Cannot be my seven-year-old cowboy-and-indian reflexes that somehow made it well past voting age. I am above the law, I am the law, do not challenge me, do not look at me crosswise, or you will be sorry. And you wonder why the bottles are flying and the bullets too. Really. You do wonder. Seems to me, a reasonable person can look at you as an occupation army trooper, not a citizen enforcing the law. Good luck. You will need it.

•Mr, Dutta, you are declaring that citizens do not have the right of free speech the instant they encounter you. If they say something you do not like you claim you then have the right to club, taze, and presumably shoot them. Your kind found plenty of air time in Nazi Germany. It does not belong here.

•This article is really pretty outrageous. The author is saying that a cop should be treated with respect even when he is violating your rights. Well, that's not the way it works. The truth is that the police need to be better trained – not just to react with restraint, but about people's rights. The way it is now, some cops draw their guns and start shooting at the slightest provocation. The number of times that I've heard about people being shot by five, six or seven cops is huge. Even if a man has a knife (as with the man who was just killed in St. Louis), five cops should be able to disarm him without shooting him. At the very least, they need to be trained to shoot at people's legs and not their torsos. Danger is part of being a cop, and they can't react with deadly force every time they feel threatened. Furthermore, egotistical cops need to be identified and thrown off the force. I am a person who has never had a confrontation with the police, but I have been treated with arrogance by enough cops that I have come to dislike them.

In Mr. Dutta's defense, he does seem to be trying to acknowledge both sides of the current policing "controversy." But in doing so, he is revealing a certain lack of historical reference. Modern policing is just that – modern. The entire edifice of modern law enforcement is probably less than a century old. Even in the US, the concept of an armed officer patrolling the streets is a post-Civil War evolution.

Of course, previous societies used armed force to "keep order" but the elaborate justifications of modern-day policing were likely absent. In fact, this is probably part of the problem: Such elaborations raise expectations that are difficult to satisfy. Domestic Western populations in the 21st century have little say over what rules and regulations are promulgated in their name. And similarly, they have little input into how those regs are enforced, the penalties attached to them etc.

Dutta's frame of reference is a modern one: Police are charged with "keeping order" and are allowed to use "deadly force" to do so. It never occurs to him that the whole paradigm may be incorrect.

In fact, the idea that police armed with ferocious weapons are necessary to keep the peace is being challenged once again in Ferguson, Missouri where riots have taken place after yet another unnecessary police shooting of an unarmed civilian.

Ironically, those who are reportedly most successful at protecting their stores and goods are those who are armed and standing watch. Once again, it is not the police that are securing the peace but individual armed civilians.

The idea that armed police – serving at the pleasure of the state itself – are somehow necessary to maintain civilian order is surely a kind of dominant social theme. In fact, one could argue that in the 21st century, especially in the US, police have been deliberately militarized and set against the very public they are purportedly supposed to serve.

The result is often near-chaos and deepening civilian mistrust. In fact, the results are obvious. The deeper question is … why?