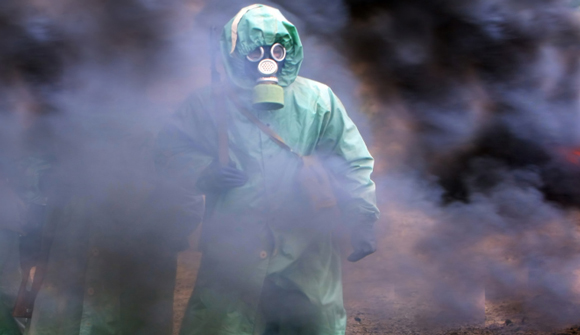 EDITORIAL, International Real Estate
The Ferguson Uprising Is Only a SHTF Preview
By Ron Holland - November 25, 2014

"The time to buy is when there's blood in the streets." – Baron Rothschild

Events unfolding in Ferguson, Missouri in the "Show Me State," are allowing Americans an opportunity to safely watch on cable news a frightening preview of what will likely happen when a real SHTF event takes place. Just take the uprising in the small town of Ferguson (population 21,000) and multiply the mob violence and police/military overreaction somewhere between 200 and 500 times to get a glimpse of the future should poor areas of many cities and metropolitan areas erupt following a severe financial crisis and subsequent cut in welfare benefits and government employment in a future crisis scenario.

The trigger might be a global run on Washington Treasury debt or a 50% collapse in dollar purchasing power following the end of the petrodollar scam. This and the dollar world reserve currency status have raped the economies of particularly poor countries around the world since Nixon closed the gold window on August 15, 1971 by executive order.

Yes, I know, today you live in the relative safety and security of the suburbs or in a highly-policed downtown gentrified enclave for professionals and other successful high net worth individuals. But you need to remember the underclass poor really have nothing to lose in a financial meltdown because they don't have anything now. They already live day-to-day and have been dealing with police brutality for their entire lives.

Remember, for the underclass America is truly a police state with the largest percentage of people in prison in the entire world. For men in the US, 38% of whites, 44% of Hispanics and 49% of blacks have been arrested by age 23. Now, the vast majority of this is drug related, another reason to legalize drugs, but you see the problem. Because of incarceration or living in a crime-ravaged neighborhood, many of these people are violent and armed and are familiar with taking what they need and want in a violent manner.

The underclass of poor people will immediately go hungry soon after the welfare benefits are cut or government employment ends. This could happen in a serious financial collapse when global bond markets and currency traders force the US to get its financial house in order or else. When the gravy train ends the US cities will erupt in violence and mayhem with runs on supermarkets and stores first in their own neighborhoods; once the easy-pickings are exhausted, they will go to the suburbs.

The question you must answer is this: Where will your suburban town or city neighborhood find enough police or military to protect you and your property? I would not want to live within 100 miles of a major city or metropolitan area in this kind of nightmare scenario. Remember, the police and National Guard will be hard pressed just to defend establishment priority targets including vital government, media and financial institutions and business areas, so you will probably be left on your own.

Personally, unless I lived way out in a rural area where people are armed and able to defend themselves and their property, I would want a safe haven second home location to which I could evacuate my family in the event of this happening. You can choose safe haven locations in the United States or outside the country depending on whether you fear the poor out to feed and clothe their families or the government overreaction. In any case, get ready for dictatorial presidential executive orders, martial law, the closure of financial institutions, the seizure of your means to protect yourself along with the sealing of safe deposit boxes and the confiscation of your gold, cash and precious metals.

I'm truly sorry for the people of Ferguson. But this situation has afforded the nation a wakeup call for a nightmare future should a financial panic and economic collapse take place. While this is a minor civil disturbance event in a relatively small town, imagine if it were nationwide. Take actions now to protect yourself, your wealth and your family accordingly.

If you live within 100 miles of a major city, make plans today to protect your family should a SHTF event take place. But only invest in a safe haven second home location if it is where you would like to both vacation and live if the worst happens. The end of the world is not upon us. Our major risk at this point is that the safe and secure world many of us have lived in for decades could be lost for a time.

America will survive and once again prosper and we will eventually end tyranny, returning the rule of law and institutions back to the original vision of our founding fathers. It is what happens during the interim that we need to prepare for in order to safeguard our families and our wealth. With crisis comes opportunity but let's hope the blood in the streets is kept to a minimum.

Yes, we all know of the Baron Rothschild statement quoted at the beginning of this article, "The time to buy is when there's blood in the streets." But the baron had many safe haven homes and castles and he didn't have to be in the streets. Right now, most of us are able to watch the streets from a safe distance. Plan wisely today so you don't find yourself later in a battleground between criminal elements and militarized police forces defending establishment institutions. Start now to build your own safe haven second home residence tailored to the needs and vacation objectives of your family. It could be an opportunity for many wonderful vacations and good times. In addition, in a SHTF event it could be the difference between life and death for you and your family.