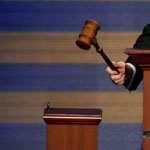 A decade behind schedule, a $350 million downtown high school finally opened on Wednesday after years of environmental, seismic and legal troubles. "We've been waiting a long time to get this," said Uriel Rivera, an 18-year-old senior at the Edward R. Roybal Learning Center. "A lot of people in the community were supposed to graduate from here, but they didn't. I thought it was going to be the same for me." Rivera was among more than 2,400 students who streamed into the school on its first day – long after what had been expected to be a late 1990s debut of an education showplace to relieve sorely overcrowded classrooms. Much of what was then called the Belmont Learning Center was already constructed before fears grew about toxic gases rising from an old oil field upon which it was built. Construction was halted in 2000, then resumed in 2002 only to be thwarted again, this time by the discovery of an earthquake fault that crosses the site. Lengthy investigations by the county district attorney's office, the city attorney and the California attorney general found no criminal wrongdoing, but in 2003 District Attorney Steve Cooley labeled the project "a public works disaster of biblical proportions." – AP

Dominant Social Theme: Even in the face of tremendous adversity, the American "can do" spirit overcomes.

Free-Market Analysis: The only trouble with "can do" spirit in this regard is that it is using taxpayers money. In fact, the $350 million high school only indicates the degree of insanity that afflicts a society saddled with both public schools and central banks.

We've discussed the disturbing effects of central banking on American society many times in these pages. Certainly, the mechanism of central banking, its ability to print money out of nothing, has been in large part responsible for the shocking bloat of the US federal budget. No one in their right mind would spend $350 million on a high school, but if the money is available courtesy of fiat funding, there will be – surprise, surprise – many eager to extend their hands. The purpose for the funding then becomes incidental so long as the money is disbursed.

What is just as fascinating as the mechanism of central banking and just as little known is the history – the descending arc – of American education. Once American education was the envy of the world. Private education combined with an agrarian respect for literacy helped provide the United States with a literacy rate hovering at 90 percent or more. But such good things do not last forever. In this case, the culprit, to begin with, was ironically one of that nation's leading educational establishments, Harvard University.

Harvard University was set up by Puritans to pursue a public/private approach in which the ideology of the Puritans was to be put forth – a theocracy that would seek to blend the Puritan ethic with governmental institutions. The mission has apparently remained the same throughout the years, and much that has occurred in American education has been tainted by this theological aspect.

The milestone of modern American education came with the ascension of John Dewey in the 1800s. Dewey was a socialist who imbibed a certainty about social leveling from his spiritual roots and from the tenor of the times. In his rambling suggestions that children be educated to serve the state, he embodied the Harvard-centric approach to American education. Unfortunately, for American children, Dewey was not merely an ideologue, he was also a persuasive pedant in the right place and time.

Associated professionally with New York-based Teachers College, the leading educational institute of the times (and now) Dewey further benefited from like-minded individuals helping disburse the estate of John D. Rockefeller. It was the marriage of Dewey's socialist convictions and Rockefeller's money that helped transform Teachers College into America's leading educational establishment. Yet Dewey's theories were not entirely pro-literacy. In fact, here is a statement of his beliefs in which he makes the clear point that the child's own "social activities" should receive educational precedence over his or her academic studies.

"I believe that the social life of the child is the basis of concentration, or correlation, in all his training or growth. The social life gives the unconscious unity and the background of all his efforts and of all his attainments. I believe that the subject-matter of the school curriculum should mark a gradual differentiation out of the primitive unconscious unity of social life. I believe that we violate the child's nature and render difficult the best ethical results, by introducing the child too abruptly to a number of special studies, of reading, writing, geography, etc., out of relation to this social life. I believe, therefore, that the true center of correlation on the school subjects is not science, nor literature, nor history, nor geography, but the child's own social activities." – John Dewey (My Creed)

For Dewey, in fact (who apparently admired the Soviet Union, circa 1930), the paramount goal of education was to create malleable men and women who would get along with others and be good workers for large corporations or the state itself. If they could not read or write well, Dewey was not so concerned. The main point of education was "socialization" – the "child's own social activities."

It was this creed that was carried forth by Teachers College, swelled by Rockefeller millions and buttressed by Dewey's wrongheaded but popular theories. As public education became an ever more important part of the American education scene, Dewey's statist educational views gained continual favor, with Teachers College becoming a pre-eminent supplier of teachers throughout the land.

Thus it is that 21st-century American education has come to this: a $350 million school built on a gas trap that likely turns out students that have trouble reading for even minimal comprehension, have little in the way of math or language skills and likely have a contempt for education in any form except perhaps as a way to gain slightly more lucrative professional positions.

American education, especially in its big cities, is in shambles. Cities like New York see upwards of a 50 percent dropout rate in high school. What is only slightly more shocking than the dysfunctional nature of American education is the amount of money that United States citizens are coerced into spending on it.

America and its citizens have many problems, but public schooling is by no means the least. It is certainly the lousy and increasingly expensive public schools that have "dumbed down" American citizens who are seemingly content to absorb government propaganda about that nation's economic, military and social superiority.

Lacking judgment and a frame of reference, Americans are willing to submit to whatever plans the regime du jour has in mind for them, and unfortunately, the rest of the world. The story about a $350 million high school explains a lot – not only about the endemic corruption of modern American society but also why that country is slipping helplessly behind in terms of living standards and scientific and professional achievement.