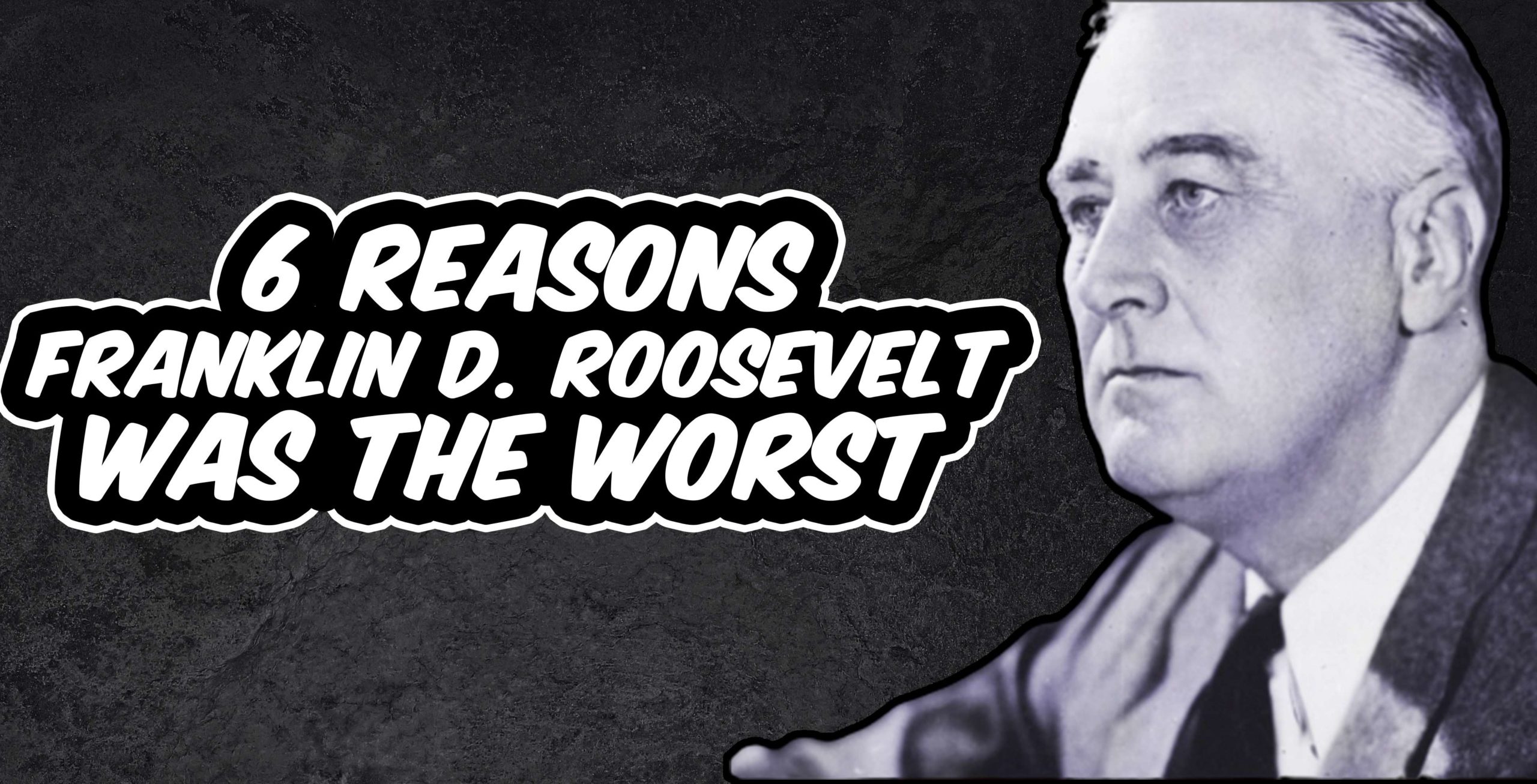 Can you believe that there are at least three statues of Franklin D. Roosevelt in Washington DC? There is one in South Dakota too, another in Virginia, and even more in London.

It appears all these places are overrun by racists and fascist sympathizers. How can people celebrate a man who:

1. Literally Rounded Up 120,000 Japanese Americans, and put them in Concentration Camps.

Executive order 9066 authorized the arrest and detention, without charges, or American citizens of Japanese ancestry. Franklin D. Roosevelt signed it into law on February 19, 1942.

Two reports which Roosevelt commissioned in the years prior to their internment found that Japanese Americans posed little to no risk to the government. But FDR ignored the reports’ recommendations.

70,000 of those arrested and detained, sometimes for years, were American citizens. And a simple executive order–no due process– allowed them to be arrested for no reason other than their race and nationality.

How is FDR not widely accepted as the biggest American racist of the last century?

With Executive Order 6102, signed on April 5, 1933, everyone living in America was given 25 days to turn in their gold. Their property–gold coins and bullion–was confiscated. It became a criminal offense for any American to own or trade gold anywhere in the world– except for some exceptions like jewelry and collector’s coins.

The government paid about $20 per ounce for the gold they forced citizens to sell them. Shortly after, the government set the price of gold to $35 per ounce.

They could do that, because at that point, a dollar was still backed by a set amount of gold. Increasing the dollar value of gold, allowed them to print more money. That is even easier today, unhindered by a gold standard.

The law wasn’t repealed until 1974. Only then was private ownership of gold once again fully legal in the US.

3. FDR was Pen Pals With Mussolini, Whom he Admired.

Benito Mussolini was the fascist Dictator of Italy in league with Adolf Hitler during World War II.

The book, Three New Deals, shows how similar the movements of the 1930’s were in America, Italy, and Germany.

It also recounts how Roosevelt said:

‘I don’t mind telling you in confidence,’ FDR remarked to a White House correspondent, ‘that I am keeping in fairly close touch with that admirable Italian gentleman,’

“Reminiscent of Fascism is the principle that the state no longer leaves the economy to its own devices.… Without question, the mood accompanying this sea change resembles that of Fascism.”

Mussolini and FDR were two peas in a pod.

4. The Roosevelt Administration was Infested with Soviet-Russian Spies.

Diana West describes in her book, American Betrayal, just how well the Soviet Union infiltrated the White House. Top officials close to the President were supportive of the Soviet Regime. Some were almost certainly actual Soviet spies.

In one sketchy encounter, soldiers were told to stand down when they witnessed American secrets being smuggled out of America on a plane bound for Russia, guarded by Soviet soldiers. This may be how the Soviet Union was able to make nuclear weapons.

Many other policies were directly influenced by socialist sympathizers and possibly outright spies in the government appointed by FDR. For instance, Soviet troops were given American supplies during World War II through the “Lend-Lease” program, while American troops went without.

Roosevelt warned in 1938 that “our newspapers cannot be edited in the interests of the general public, from the counting room. And I wish we could have a national symposium on that question, particularly in relation to the freedom of the press. How many bogies are conjured up by invoking that greatly overworked phrase?”

He’s basically saying he wishes he could shut down “fake news”.

Roosevelt also started the FCC (Federal Communications Commission) and limited licenses for radio broadcasting to six months. That way the government could revoke a license, and silence critics of FDR.

It did not take long for broadcasters to get the message. NBC, for example, announced that it was limiting broadcasts “contrary to the policies of the United States government.” CBS Vice President Henry A. Bellows said that “no broadcast would be permitted over the Columbia Broadcasting System that in any way was critical of any policy of the Administration.” He elaborated “that the Columbia system was at the disposal of President Roosevelt and his administration and they would permit no broadcast that did not have his approval.” Local station owners and network executives alike took it for granted, as Editor and Publisher observed, that each station had “to dance to Government tunes because it is under Government license.”

FDR’s government illegally intercepted telegraphs and used the ill-begotten information to subpoena journalists, chilling any dissent, and drying up the flow of information to reporters. A law was even proposed to give prison sentences to anyone who knowingly published fake news.

6. The Roosevelt administration seized and destroyed crops while Americans starved

The Agricultural Adjustment Act of 1933, reauthorized in 1938, was allegedly to help struggling farmers. The point was to raise the prices of crops, to keep farmers from going broke and abandoning their farms.

Of course if farmers were abandoning their farms because prices were too low to make a living, that would have naturally decreased supply…

Instead, power-hungry leaders like FDR just had to intervene. And the consequences were disastrous.

Remember this was during the Great Depression, which meant already struggling families had to pay more for food.

Then when not enough crops were grown in the US, America had to import crops, making the country more dependent and less self sufficient.

There are plenty more reasons to despise Franklin D. Roosevelt. But if we are putting in requests to destroy racist, fascist statues, FDR should top the list.