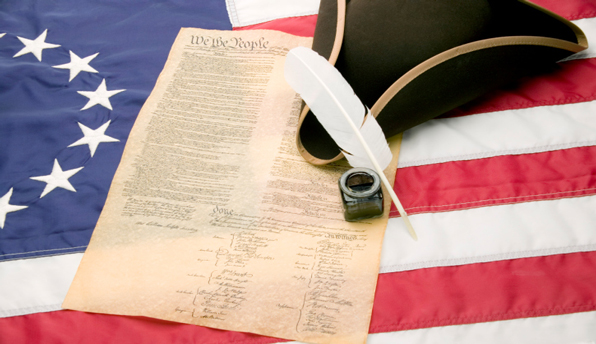 “It is the duty of the patriot to protect his country from its government.” —Thomas Paine

Had the Declaration of Independence been written today, it would have rendered its signers extremists or terrorists, resulting in them being placed on a government watch list, targeted for surveillance of their activities and correspondence, and potentially arrested, held indefinitely, stripped of their rights and labeled enemy combatants.

This is no longer the stuff of speculation and warning.

In fact, Attorney General William Barr recently announced plans to target, track and surveil “anti-government extremists” and preemptively nip in the bud any “threats” to  public safety and the rule of law.

It doesn’t matter that the stated purpose of Barr’s anti-government extremist task force is to investigate dissidents on the far right (the “boogaloo” movement) and far left (antifa, a loosely organized anti-fascist group) who have been accused of instigating violence and disrupting peaceful protests.

Boogaloo and Antifa have given the government the perfect excuse for declaring war (with all that entails: surveillance, threat assessments, pre-crime, etc.) against so-called anti-government extremists.

Without a doubt, America’s revolutionary founders would have been at the top of Barr’s list.

After all, the people who fomented the American Revolution spoke out at rallies, distributed critical pamphlets, wrote scathing editorials and took to the streets in protest. They were rebelling against a government they saw as being excessive in its taxation and spending. For their efforts, they were demonized and painted as an angry mob, extremists akin to terrorists, by the ruler of the day, King George III.

Of course, it doesn’t take much to be considered an anti-government extremist (a.k.a. domestic terrorist) today.

If you believe in and exercise your rights under the Constitution (namely, your right to speak freely, worship freely, associate with like-minded individuals who share your political views, criticize the government, own a weapon, demand a warrant before being questioned or searched by the police, or any other activity viewed as potentially anti-government, racist, bigoted, anarchic or sovereign), you’re at the top of the government’s terrorism watch list.

Indeed, under Barr’s new task force, I and every other individual today who dares to speak truth to power could also be targeted for surveillance, because what we’re really dealing with is a government that wants to suppress dangerous words—words about its warring empire, words about its land grabs, words about its militarized police, words about its killing, its poisoning and its corruption—in order to keep its lies going.

This is how the government plans to snuff out any attempts by “we the people” to stand up to its tyranny: under the pretext of rooting out violent extremists, the government’s anti-extremism program will, in many cases, be utilized to render otherwise lawful, nonviolent activities as potentially extremist.

The danger is real.

This is pre-crime on an ideological scale and it’s been a long time coming.

For example, in 2009, the Department of Homeland Security (DHS) released two reports indicating that for the government, anyone seen as opposing the government—whether they’re Left, Right, or somewhere in between—can be labeled an extremist.

That same year, the DHS launched Operation Vigilant Eagle, which calls for surveillance of military veterans, characterizing them as extremists and potential domestic terrorist threats because they may be “disgruntled, disillusioned or suffering from the psychological effects of war.”

Incredibly, the reports use the words terrorist and extremist interchangeably.

Fast forward a few years, and you have the National Defense Authorization Act (NDAA), which Congress has continually re-upped, that allows the military to take you out of your home, lock you up with no access to friends, family or the courts if you’re seen as an extremist.

Now connect the dots, from the 2009 Extremism reports to the NDAA, the National Security Agency’s far-reaching surveillance networks, and fusion centers that collect and share surveillance data between local, state and federal police agencies.

Add in tens of thousands of armed, surveillance drones that are beginning to blanket American skies, facial recognition technology that will identify and track you wherever you go and whatever you do. And then to complete the circle, toss in the real-time crime centers being deployed in cities across the country, which will be attempting to “predict” crimes and identify criminals before they happen based on widespread surveillance, complex mathematical algorithms and prognostication programs.

Hopefully you’re getting the picture, which is how easy it is for the government to identify, label and target individuals as “extremist.”

Two hundred and forty-four years after a group of anti-government extremists declared their independence from tyranny, the American people have once again managed to work their way back under the tyrant’s thumb.

As I make clear in my book Battlefield America: The War on the American People, the building blocks for the bleak future we’re just now getting a foretaste of were put in place by government officials we trusted to look out for our best interests and by American citizens who failed to heed James Madison’s warning to “take alarm at the first experiment on our liberties.”

For too long now, we have suffered the injustices of a government that has no regard for our rights or our humanity.

We’ve suffered in silence for too long.

Frankly, what this country desperately needs is more anti-government extremists willing to take the government to task for its excesses, abuses and power grabs that fly in the face of every principle for which America’s founders risked their lives.