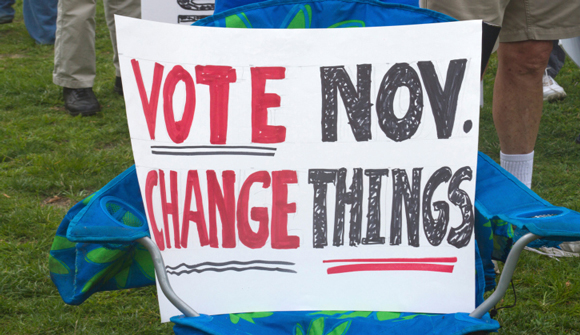 The day after: Obama, GOP in new political dynamic … A weakened President Barack Obama and emboldened Republican leaders in Congress began adjusting to a new political dynamic Wednesday after voters coast to coast used the midterm elections to sharpen the dividing lines in an already divided government … The election results were resounding: The GOP won control of the Senate and strengthened its hold on the House as a series of Democratic-leaning states fell under control of new Republican governors. – AP

Free-Market Analysis: Republicans have gained control in the US House and Senate. From our perspective, only one thing will change: The level of frustration will continue to climb.

This is important to understand because it has numerous implications for US sociopolitical and economic environments. There will be many drawn into the larger hype regarding current manifestations of "hope and change" but these people will inevitably labor under false assumptions. But many will not.

Of course, a good deal of election interpretation is convincing, at least on the surface. Post-election, voters will choose to believe elite memes; they will choose to reside in the matrix rather than appreciating opportunities outside of it.

It is not easy to think outside the proverbial box. After all, the meme has been fairly planted now. People are being conditioned to expect change. The media will express it; the candidates, win or lose, will announce it.

Over and over in the mainstream media, following this or that "historic" victory, we see repeated the statement that victors will have to "govern" now. Already, we are being informed that President Barack Obama will have to negotiate with the new majorities in both houses.

[Results] will force both sides to rethink their approach on immigration reform, budget matters, presidential nominations and much more. With lawmakers planning to return to Washington next week for a post-election session, Obama invited congressional leaders to a meeting Friday.

"We are humbled by the responsibility the American people have placed with us, but this is not a time for celebration," said House Speaker John Boehner, who will preside over a larger caucus come January. "It's time for government to start getting results and implementing solutions to the challenges facing our country, starting with our still-struggling economy."

With the 2014 midterms in the rearview mirror, 2016 and the next presidential race loom large. It was no coincidence that two potential GOP contenders for 2016 — New Jersey Gov. Chris Christie and Sen. Rand Paul of Kentucky — turned up on morning talk shows Wednesday to deconstruct the results and cast them as a good sign for the GOP going forward.

Exit polls show the GOP drew strength from voters who felt left behind economically. Almost half said their own families' financial situations hadn't improved much over the past two years, and a fourth said it had gotten worse. Those who said their finances were worse supported Republican congressional candidates by more than a 2-1 margin.

Even as they turned against Obama and Democrats, voters also expressed scant confidence in Republican leaders, underscoring the increased pressure that Republicans will face to deliver next year when they control both houses of Congress.

As we can see from this excerpt, the truth inevitably leaks out. We are assured that Congress will start "getting results" and in part this is because voters are so frustrated with being "left behind" economically. At the same time, voters expressed "scant confidence" in Republican leaders.

This is the REAL key to these elections. While politicians, especially Republicans, will claim a message has been sent, that is always the case but rarely ever true. Voting is too clumsy and imprecise to "send a message" of any complexity.

In fact, there IS a message of sorts in this election, and that is that voters are unhappy with the status quo. They are seeking a change with new faces. That does not mean that they are endorsing what these faces offer. It simply means that the current outgoing group has been removed due to public discontent.

Politicians, as indicated earlier, are used to finding deeper meanings in these results. Along with the media, they employ a rigorous and predictable meme. The point is made that "the people" are demanding this or that.

We can see that the election is being interpreted in a certain way. There is no logic to the interpretation but elite policy goals continue to be fulfilled. The election itself is a meme that provides the opportunity to shape yet another unwanted dialectic to be presented by the mainstream media.

However, we'd argue people aren't as amenable to these themes as they used to be. The media can extract what it wants from these elections. In the 20th century that sort of interpretive effort was an effective tool when it came to steering society.

In the 21st century, in this Internet Era, we wonder how effective such efforts are. Certainly, there is increasing distrust when it comes to sociopolitical and economic models throughout the West.

It can be seen in increased agitation, alternative political forums, outright protests and the language of dissent expressed eloquently on Internet alternative media platforms.

Most of all it can be seen – in the US anyway – in polls that show intense dissatisfaction with Congress, the presidency, etc. Voter turnout continues to diminish. People are walking away from a system they no longer trust.

This doesn't presume a breakdown of society or open rebellion against the system as it is. But it does indicate to us that there is a continual leaking away of credibility and confidence in Western policies and even the structure of modern Western civilization.

Increasingly, media and political gatekeepers have difficulty generating interpretations of events, electoral or otherwise, that are fully credible. This is surely an important evolution.