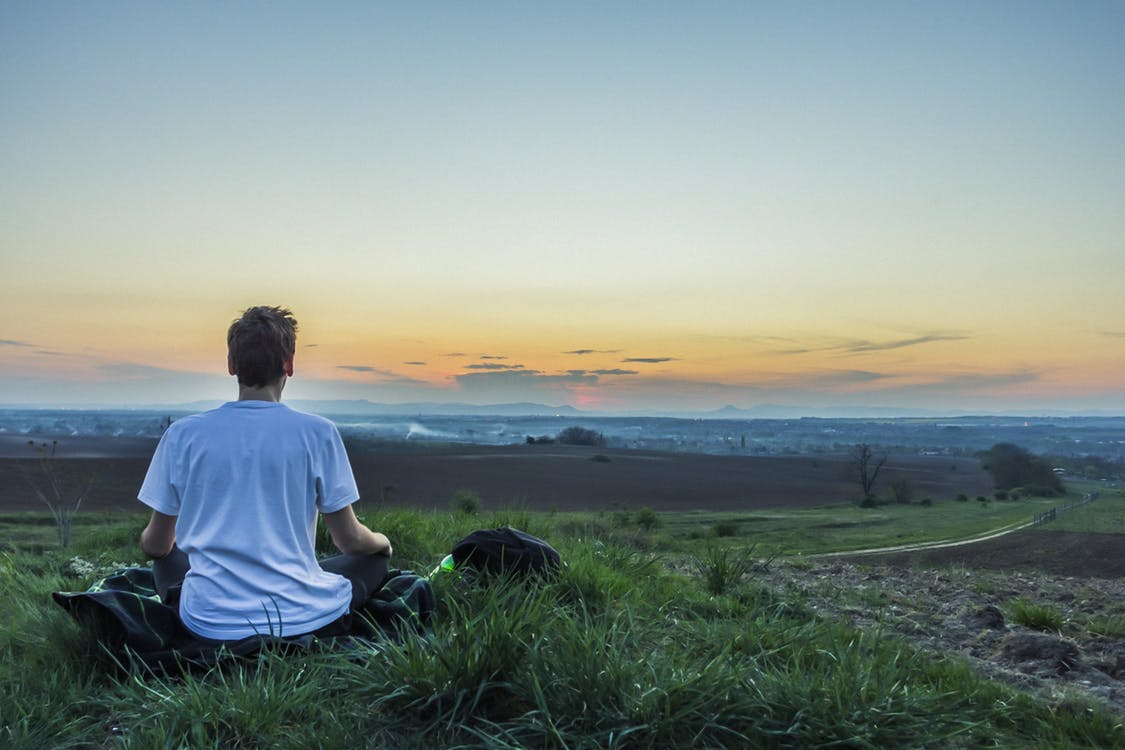 STAFF NEWS & ANALYSIS
Anger Is Rising in America. The Stoics Taught How to Keep Your Cool
By Barry Brownstein - July 09, 2019

According to the latest NPR-IBM Watson Health poll, “42% of those polled said they were angrier in the past year.”

Most of us think we are better than average. We believe others are getting even angrier than we are: “Some 84% of people surveyed said Americans are angrier today compared with a generation ago.”

No wonder some popular politicians speak like they are in a perpetual rage. Joseph Epstein, writing in the Wall Street Journal, observes of Bernie Sanders:

In his earnest self-righteousness and inflexibly held positions, Mr. Sanders reminds one of the Stalinists of old. Whenever I hear him hammering home his points in his staccato speech, using his hands for italics, I recall that old phrase of Jewish mothers of an earlier generation being nagged by their children: “Hak mir nisht keyn tshaynik!” Loosely translated: “Stop rattling that tea kettle in my face.”

Epstein adds, “Mr. Sanders isn’t a Stalinist, but, judging by his temperament and rigidity, in Stalin’s day he might have been.”

Sanders won’t be giving up his anger anytime soon; his success depends upon attracting angry voters.

And it’s not just in the political arena that anger rules the day. Harvard University law professor Ronald Sullivan, forced to step down as a faculty dean, wrote of “angry demands” on college campuses:

In his Meditations, Marcus Aurelius observed, “It’s courtesy and kindness that define a human being. That’s who possesses strength and nerves and guts, not the angry whiners.”

A few months ago, my wife and I missed our highway exit. When we exited to retrace our steps, we found ourselves backed up at a traffic light. Each time the light turned green, only five cars could make it through before it turned red again. My thinking riffed on getting to our destination on time. As I railed against reality and behaved boorishly, my wife sat still, well, stoically.

At that moment, I was sure my anger was coming from the traffic light. I didn’t sign up for a poorly controlled intersection and a delayed trip. Take the issue away, and I would be calm again. Wrong. Anger starts with an internal decision to be angry. If we want to be angry, we will find things to be angry about.

My momentary agitation was made of the same stuff as full-blown road rage. I had given the world, in the form of a traffic light, power over my peace of mind. “You shouldn’t give circumstances the power to rouse anger, for they don’t care at all,” Marcus Aurelius counseled.

The moment I stopped feeding my anger with more thinking, the anger was gone. In their book The Daily Stoic, Ryan Holiday and Stephen Hanselman write:

The first rule of holes, goes the adage, is that “if you find yourself in a hole, stop digging.” This might be the most violated piece of commonsense wisdom in the world. Because what most of us do when something happens, goes wrong, or is inflicted on us is make it worse—first, by getting angry or feeling aggrieved, and next, by flailing around before we have much in the way of a plan.

Life will often not meet our expectations. The traffic light will only let five cars through when you have to get somewhere. But do you have to allow your thinking to make the situation even worse? If you keep pinching your arm, don’t be surprised if you get bruised.

James Romm is a professor of classics at Bard College. His book How to Keep Your Cool: An Ancient Guide to Anger Management is a new translation of the Stoic philosopher Seneca’s work On Anger.

In his introduction to his book, Romm asks us to recall “the last minor incident that sent you into a rage.” He asks us to reflect on these questions: “You were injured—or were you? Were you notably worse off, a day or two later, than before the incident occurred? Did it really matter that someone disrespected you?”

Then Romm offers this pointed advice:

By shifting our perspective or expanding our mental scale, Seneca challenges our sense of what, if anything, is worth our getting angry. Pride, dignity, self-importance—the sources of our outrage when we feel injured—end up seeming hollow when we zoom out and see our lives from a distance.

In Seneca’s words, “Your anger is a kind of madness, because you set a high price on worthless things.”

Using the common example of road rage, Romm explains the price of our madness:

In your momentary road rage, in your desire to honk at, hurt, or kill the other driver, lie grave threats to the sovereignty of reason in your soul, and therefore to your capacity for right choice and virtuous action. The onset of anger endangers your moral condition more than that of any other emotion, for anger is, in Seneca’s eyes, the most intense, destructive, and irresistible of the passions. It’s like jumping off a cliff: once rage is allowed to get control, there’s no hope of stopping the descent.

Awareness cures anger. Look at “all the vices anger gives rise to and take good measure of them.” Seneca was adamant:

If you truly want to examine its effects, the damages it causes, I say that no plague has done more harm to humankind. You’ll see slaughters, poisons, mutual mud-slinging of litigants, wreckage of cities, extinctions of whole races, lives of leading men sold at public auction, torches touched to buildings, flames not contained within walls but, held by an enemy host, gleaming over vast spans of territory.

Deaf to reason and advice, stirred up by empty provocations, unsuited to distinguishing what’s just and true; [anger] resembles nothing so much as a collapsing building that breaks apart upon that which it crushes.

The Stoics advised that you can do your “duty” without anger. There is no such thing as healthy anger, taught Seneca.

Some men think it valuable to moderate anger rather than set it aside, to force it to conform to a healthy measure and restrain its overflows, to hold on to that part without which action grows weak and the force and energy of the mind is dissipated. First, however, it’s easier to shut out harmful things than to govern them, easier to deny them entry than to moderate them once they have entered. Once they’ve established residence, they become more powerful than their overseer and do not accept retrenchment or abatement.

In short, “Once shaken and overthrown, the mind becomes a slave to that which drives it.” Choose against anger as soon as you recognize it. Seneca instructs:

It is best to repel instantly the first prickings of anger, to stamp out its very seedlings, to take pains not to be drawn in. For once it has knocked us off course, the return to health and safety is difficult; no space is left for Reason once passion has been ushered in and given jurisdiction.

Since we ought to fight against first causes, the cause of anger is the sense of having been wronged; but one ought not to trust this sense. Don’t make your move right away, even against what seems overt and plain; sometimes false things give the appearance of truth. One must take one’s time; a day reveals the truth.

Like other Stoics, Seneca advised mind training. Each of us must come to know our personal storm warnings. He instructs:

It is best therefore to restrain oneself at the first sign of the evil, then to give as little rein as possible to one’s words and to block the onset. It’s easy to detect when one’s emotions first arise, since the hallmarks of the ailments precede them.

Seneca asked, “Won’t everyone want to call themselves back from anger’s borders, once they understand that its first onset is to their detriment?”

Everyone who’s transported beyond mortal thinking by an insane mind believes he’s breathing in something elevated and sublime. But there’s nothing firm underneath; things that grow without foundations are likely to slide into ruin. Anger has nothing on which it can lean; it arises from nothing steady or durable.

Some may believe that the ability to be angry with impunity is a perk of their power. Seneca would say getting angry is a booby prize.

Don’t you want me to advise those people who wield anger from the height of power, who think it a testament to their strength, who reckon a ready revenge to be one of the great benefits of great wealth, that he who is a prisoner of anger cannot be called powerful, or even free?

Can we reduce our attraction to anger? Can we keep our cool while others lose theirs? If enough of us can, there will be less demand for angry politicians.

Forgiveness Is a Healing Balm

Romm places On Anger in context: “By the time he came to write On Anger, or at least the greater part of it, he had witnessed, from the close vantage point of the Roman Senate, the bloody four-year reign of Caligula.”

Most of us are not pure saints nor demented souls like Caligula. Seneca wrote, “Even in good characters there is something rather unsavory. Human nature contains treacherous thoughts, ungrateful ones, greedy and wicked ones.”

Understanding human nature allows us to be “kinder to one another.” Seneca advised us to forgive the foibles of others: “We’re just wicked people living among wicked people. Only one thing can give us peace, and that’s a pact of mutual leniency.”

Always see your common humanity with others, counseled Seneca.

The majority of humankind gets angry not at the wrongs but at the wrongdoers. A good look at ourselves will make us more temperate if we ask ourselves: “Haven’t we ourselves also done something like that? Haven’t we gone astray in the same way? Does condemning these things really benefit us?”

Seneca pointed to our hypocrisy:

Each of us has the spirit of a king inside us: We want total freedom to be granted to us but not to those acting against us. It’s either our ignorance or our arrogance that makes us prone to anger. For what is so surprising if wicked people do wicked things?

And when we forget our ignorance and arrogance, Seneca suggests we recall “every time we find it hard to forgive, whether it’s to our benefit that everyone be implacable. How often has the one who refused mercy later sought it?”

Today, like every day, the world will provide ample opportunity to practice Seneca’s wisdom. How we spend our days becomes how we spend our life. Are we willing to learn, as Marcus Aurelius puts it, that we “have something in [us] more powerful and divine than what causes the bodily passions and pulls [us] like a mere puppet”?

Barry Brownstein is professor emeritus of economics and leadership at the University of Baltimore. He is the author of The Inner-Work of Leadership. To receive Barry’s essays subscribe at Mindset Shifts.