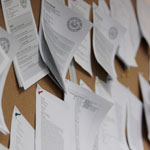 Yesterday on their website, the People's Bank of China announced a shocker. New Chinese bank lending for June was 1.53 trillion yuan ($224 billion), double the lending in May. The total already for the year is an astounding 7.4 trillion yuan when the target for the entire year was 5 trillion. Putting this in context, total lending this year so far has amounted to 25% of 2008 GDP. As I wrote earlier this week, Chinese regulators are getting concerned that this lending is going towards poor credit and bleeding into commodity market speculation. As most know, bank lending is high powered monetary stimulus due to its high velocity. This is the key difference between fiscal stimulus vs. monetary stimulus. Actually, monetary stimulus will only work well if the banks receiving the funds lend them out. In the US, this is clearly not happening due to banks loan losses and caution over new lending (expanding balance sheet.) In China, this is not the case and new loans are flowing. – CNBC

Free-Market Analysis: We've written about this before. China backed into "capitalism" about 30 years ago and the impetus for where it is now was increased by the problems with Tiananmen Square. The Chinese leaders are not interested in political theory at this point (if they ever were). Their currency is power and the way to maintain power is to create an apolitical system where citizens "can grow rich." Western systems work a good deal better than communist systems in this regard. And thus China has built a facade of a Western system.

Yes, it is really only an imitation of a Western system (from a political and big business perspective anyway) in our opinion, just as its banks are only imitations of Western banks and its stock markets are only imitations as well. In fact, to grow rich by investing in the Chinese stock market one apparently simply has to listen intently to the noises coming from the government as to what companies will grow and what companies will not. As far as the banks go, the system is probably even more basic than in the West. The central bank prints as much money as it can, and the commercial banks disseminate it. These banks may act as independent entities, but they still have a foot in state government as do many large companies in China.

It is all fairly well jury rigged. China has incorporated a façade of Westernism but to cast China as the world's financial engine is to understand how desperate the West has become. China's economy grows by 10 and 15 percent a year, and now appears be heating up even more. This is not normal growth but central banking generated growth. The same clique still runs China, but the economy has been supercharged by additional printing.

China is said to be turning inward now, as Western countries cannot afford to buy its products. But whether China will be able to maintain its growth by using its own huge population as a purchasing pool remains to be seen. What will certainly happen sooner or later is that the supercharged money being used by the Chinese will create the same boom-bust cycle as has happened elsewhere. Only when it ends in China after so many years, it will be the mother-of-all blow-offs.

It is difficult to see what Chinese leaders expect to happen once the bubble busts. Maybe they are gambling that they can control the unrest that will come in its wake. Maybe they assume the bubble will not bust for many years. But articles like the one excerpted above show us that sooner or later China's overheated and pseudo-Western economy will implode, and likely even more violently than Western economies ever have. And here's a thought: The Chinese in the meantime are said to be big buyers of gold on a government level and also personally. Perhaps what is going to eventually happen is better known in China than the West.