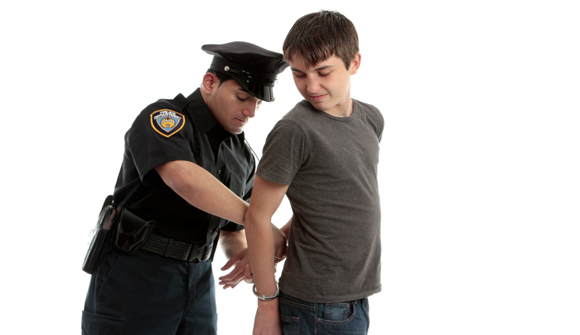 Just when you thought the government couldn’t get any more tone-deaf about civil liberties and the growing need to protect “we the people” against an overreaching, overbearing police state, the Trump Administration ushers in even more strident zero tolerance policies that treat children like suspects and criminals, greater numbers of school cops, and all the trappings of a prison complex (unsurmountable fences, entrapment areas, no windows or trees, etc.).

The fallout has been what you’d expect, with the nation’s young people treated like hardened criminals: handcuffed, arrested, tasered, tackled and taught the painful lesson that the Constitution (especially the Fourth Amendment) doesn’t mean much in the American police state.

For example, in Florida, a cop assigned to River Ridge High School as a school resource officer, threatened to shoot a student attempting to leave school for a morning orthodontist appointment.

In Pennsylvania, school officials called in the cops after a 6-year-old with Down syndrome pointed a finger gun at her teacher.

In Kentucky, a school resource officer with the sheriff’s office handcuffed two elementary school children with disabilities, ages 8 and 9. A federal judge made the sheriff’s office pay more than $300,000 (of taxpayer money) to the families, ruling that the handcuffing of  the students “was an unconstitutional seizure and excessive force.”

Welcome to Compliance 101: the police state’s primer in how to churn out compliant citizens and transform the nation’s school’s into quasi-prisons through the use of surveillance cameras, metal detectors, police patrols, zero tolerance policies, lock downs, drug sniffing dogs, strip searches and active shooter drills.

If you were wondering, these police state tactics have not made the schools any safer.

Rather, they’ve turned the schools into authoritarian microcosms of the police state, containing almost every aspect of the militarized, intolerant, senseless, overcriminalized, legalistic, surveillance-riddled, totalitarian landscape that plagues those of us on the “outside.”

Two years after President Trump announced his intention to “harden” the schools, our nation’s children are reaping the ill effects of gun-toting, taser-wielding cops in government-run schools that bear an uncomfortable resemblance to prisons.

America’s schools are about as authoritarian as they come.

Young people in America are now first in line to be searched, surveilled, spied on, threatened, tied up, locked down, treated like criminals for non-criminal behavior, tasered and in some cases shot.

In my day, if you talked back to a teacher, or played a prank on a classmate, or just failed to do your homework, you might find yourself in detention or doing an extra writing assignment after school.

That is no longer the case.

Nowadays, students are not only punished for minor transgressions such as playing cops and robbers on the playground, bringing LEGOs to school, or having a food fight, but the punishments have become far more severe, shifting from detention and visits to the principal’s office into misdemeanor tickets, juvenile court, handcuffs, tasers and even prison terms.

Increasing the number of cops in the schools only adds to the problem.

Funded by the U.S. Department of Justice, these school resource officers (SRO) have become de facto wardens in elementary, middle and high schools, doling out their own brand of justice to the so-called “criminals” in their midst with the help of tasers, pepper spray, batons and brute force.

The horror stories are legion.

One SRO was accused of punching a 13-year-old student in the face for cutting the cafeteria line.

That same cop put another student in a chokehold a week later, allegedly knocking the student unconscious and causing a brain injury.

In Pennsylvania, a student was tasered after ignoring an order to put his cell phone away.

When 13-year-old Kevens Jean Baptiste failed to follow a school bus driver’s direction to keep the bus windows closed (Kevens, who suffers from asthma, opened the window after a fellow student sprayed perfume, causing him to cough and wheeze), he was handcuffed by police, removed from the bus, and while still handcuffed, had his legs swept out from under him by an officer, causing him to crash to the ground.

Not even the younger, elementary school-aged kids are being spared these “hardening” tactics.

On any given day when school is in session, kids who “act up” in class are pinned facedown on the floor, locked in dark closets, tied up with straps, bungee cords and duct tape, handcuffed, leg shackled, tasered or otherwise restrained, immobilized or placed in solitary confinement in order to bring them under “control.”

Very rarely do the kids pose any credible danger to themselves or others.

Unbelievably, these tactics are all legal, at least when employed by school officials or school resource officers in the nation’s public schools.

This is what happens when you introduce police and police tactics into the schools.

Paradoxically, by the time you add in the lockdowns and active shooter drills, instead of making the schools safer, school officials have succeeded in creating an environment in which children are so traumatized that they suffer from post-traumatic stress disorder, nightmares, anxiety, mistrust of adults in authority, as well as feelings of anger, depression, humiliation, despair and delusion.

So what’s the answer, not only for the here-and-now—the children growing up in these quasi-prisons—but for the future of this country?

How do you convince a child who has been routinely handcuffed, shackled, tied down, locked up, and immobilized by government officials—all before he reaches the age of adulthood—that he has any rights at all, let alone the right to challenge wrongdoing, resist oppression and defend himself against injustice?

As I make clear in my book Battlefield America: The War on the American People, any significant reforms will have to start locally and trickle upwards.

For starters, parents need to be vocal, visible and organized and demand that school officials 1) adopt a policy of positive reinforcement in dealing with behavior issues; 2) minimize the presence in the schools of police officers and cease involving them in student discipline; and 3) insist that all behavioral issues be addressed first and foremost with a child’s parents, before any other disciplinary tactics are attempted.

If you want to raise up a generation of freedom fighters who will actually operate with justice, fairness, accountability and equality towards each other and their government, then remove the metal detectors and surveillance cameras, re-assign the cops elsewhere, and start treating our nation’s young people like citizens of a republic and not inmates in a police state penitentiary.