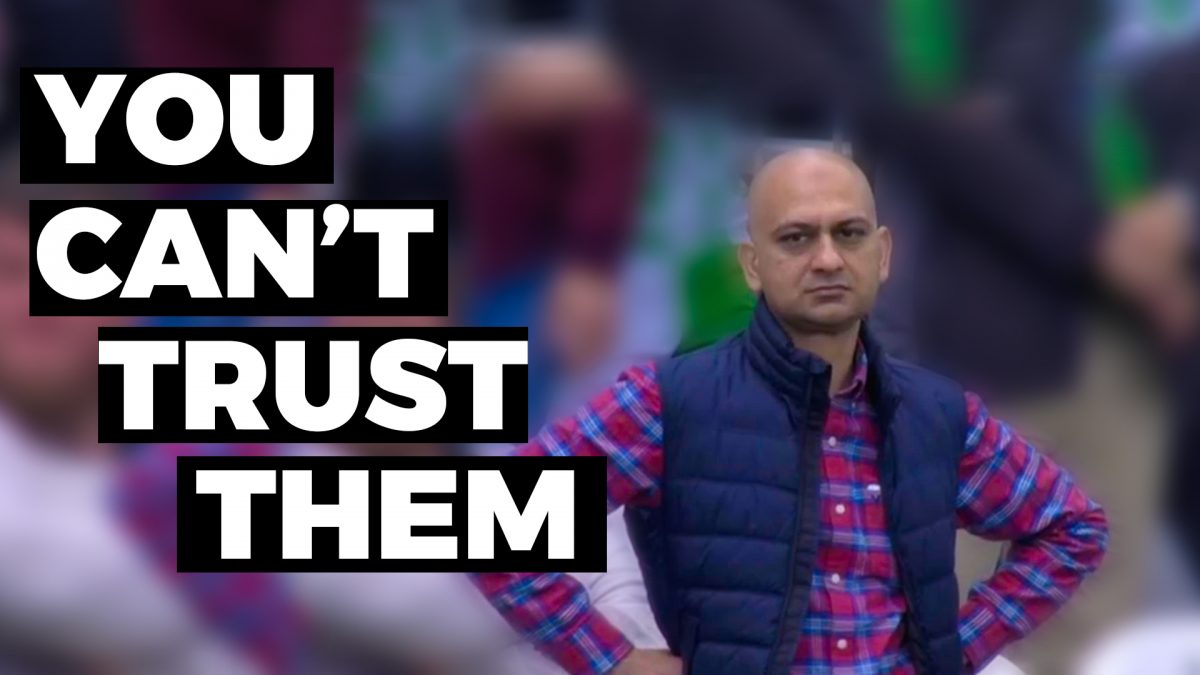 This time, things will be different. He’s abused me in the past, but I’m sure he’s changed. At the core, he really loves me, he just has a strange way of showing it.

Does this sound like a healthy relationship to you? A partner who gaslights you, acting like you’re the crazy one for being suspicious… when you’ve been lied to and manipulated so many times in the past. Someone who sows division to isolate you from your friends and family so you have no one to rely on but the abuser.

Literally, people act like you’re the crazy one for being skeptical of some of the least trustworthy institutions in existence.

If you asked a typical extreme leftist in early 2020 if they trusted big pharma, they would laugh in your face.

They might talk about pharma-bro Martin Skrelli hiking drug prices, or correctly note how the Perdue family made billions partnering with the government and doctors to get Americans hooked on legalized heroin pills.

People had the same attitude back in 1976 when the government urged Americans to get a new swine flu vaccine. Hundreds died, and thousands were left with neurological disorders.

The news show 60 minutes, back then, was trustworthy, and reported on this.

Today they run factually inaccurate, deceptively edited hit-pieces on politicians like Florida Governor Ron DeSantis, for not becoming public health dictators. Another example of the crumbling trustworthiness of essentially every centralized powerful institution.

But back then, 60 Minutes investigated the government’s deception when it came to the vaccine it was pushing. YouTube– another untrustworthy institution– deleted the video, but it’s still up on Bitchute.

This is probably a good time to remind you that I post all my videos on alternative video sights, and you should follow me on at least one other platform– unless you totally trust YouTube to allow me to keep spreading the truth.

Anyway, the old 60 Minutes shows that even back in the 70s, the CDC director used a familiar line:

9:57- “I think the consensus of the scientific community was that the evidence relating neurologic disorders to influenza immunization was such that they did not feel that this association was a real one.”

There was also a scientific consensus in 1967 when the New England Journal of Medicine published a study which found sugar was not as unhealthy as it seemed, and in fact excess fat in the diet was the main culprit for poor health.

But that study was used as a foundation of scientific consensus for decades to downplay the negative health affects of sugar, and blame fat– which turns out to not be so bad after all.

Only anti-science conspiracy theorists at the time believed that honorable scientists could be so easily manipulated into doing the bidding of the sugar industry.

Then there are the doctors– surely you can trust doctors.

That’s what hundreds of black men believed when the US government offered them free healthcare in 1932 to treat “bad blood”. In fact, the government knew, these men were infected with syphilous. But they were not told of the diagnosis. They were used as lab rats to observe the untreated progression of ultimately fatal syphilous. This went on until the 1970s– the Tuskegee Syphilous experiments.

Today, understandably so, black people are some of the most skeptical of the government/ scientific partnership pushing vaccines.

It’s like Schrödinger’s systemic racism: black people are supposed to simultaneously believe that every institution is hopelessly infused with racism, but they can totally trust the doctors and scientists today.

Some of these things happened a long time ago. They say hindsight is 20/20– only from some distance can we see the lies and manipulations of the government, scientists, and doctors.

But today, people seem to think we are immune from this. Do they seriously believe that things have changed for the better? Are we so naive that we can believe institutions which were corrupt and incompetent in the 1960s, 70s, 80s, and 90s suddenly became paragons of truth in the 00s forward?

It is absolute insanity to think that governments today are different from the way governments have always been.

Over the past year, Facebook fact-checkers banned mention of the possibility that Covid-19 came from a lab leak at the Wuhan Virology lab within spitting distance of where the outbreak first occurred.

They based that decision on a letter orchestrated and signed by a man named Peter Daszak who said it was xenophobic anti-Asian hate to suggest, or investigate, the lab leak theory.

Turns out, Daszak repackages federal grant money, and had funded research at the Wuhan Institute of Virology. Shockingly, when he was sent to investigate with a World Health Organization task force, he found no evidence of any wrongdoing. He didn’t bother to look at the viruses sequenced by the lab, or inquire about the three gain of function researchers– genetically modifying viruses to be more contagious and deadly– who went to the hospital in November 2019 with Covid-like symptoms.

Frankly, the burden of proof is not on us skeptics to show why any particular government or big pharma or big tech campaign does not deserve our trust.

These are untrustworthy institutions. They have shown us over and over again that they cannot be trusted.

They could bend over backwards to regain the public’s trust, but that’s not what they have done. They have attempted to shame and ridicule anyone who dares challenge the narrative.

Like an abusive, gas-lighting boyfriend trying to convince you YOU’RE the crazy one, for being fed up with his bullshit.