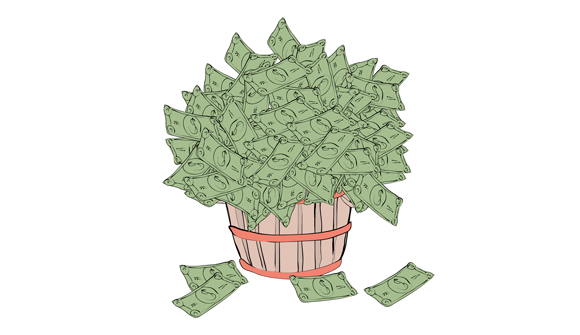 State child welfare system failing to protect youth … Until I had to deal with the Florida Department of Children and Families, I thought some of the criticism of it was unwarranted. Now I remember someone said, "It takes a village to bring up a child." I say that because when I called I was told three times only the person receiving funds from the agency could make a complaint. Does that account for why some children die because no one in the family could "interfere"? – Letter to the Bradenton Herald

Dominant Social Theme: Government welfare needs to work better. But even if it doesn't, I'll get mine.

Free-Market Analysis: There are numerous delusions associated with state welfare. Here, we will discuss two of the main ones. Our thanks to economist Gary North for a recent article that clarified our understanding.

Begin with this letter to the editor, above. It makes certain perfectly logical assumptions about the way that welfare services ought to work. The letter writer, assuming the person is not being ironic, believes that adjustments in the system will make it operate properly.

In fact, even today many well-meaning people believe that the problems with government stem from not having systems in place that encourage efficiency and appropriate results.

If only the proper authorities were alerted, the difficulties might be resolved so that people can get the level of care they deserve.

More from the letter:

When a DCF family has to get food from a shelter to feed a family or not pay the rent, something is very wrong. When a family suddenly has its monthly payment drastically reduced, without explanation, something is wrong … Who is going to rewrite the rules of procedure for this vital department to protect the children?

Unfortunately, when it comes to government services, expecting that someone sooner or later will right what is "wrong" by "rewriting the rules" is probably a forlorn hope.

No matter the intentions of these sorts of critics, a monopoly government service is not going to change for the better when there is no real outside competition to induce discipline.

But there is a second delusion that perpetuates the welfare state.

First, he provides a definition of "Wobegon economics." It is "the widespread belief that, with respect to paying the bills run up by the welfare state, everyone will pay less than his fair share."

In elaborating on this, North cites libertarian James Dale Davidson who, he recalls, appeared in 1974 on "The Tonight Show Starring Johnny Carson."

Carson asked him to describe how Congress spends money. He said it was like a credit card with no limits. The voters hand this card to all members of Congress. Davidson asked the viewers to imagine what would happen under these repayment conditions.

At the end of the year, all of the bills run up by the Congress would be paid equally by each Congressman's district. It didn't matter how much each district received; all of them would pay the same amount. The impulse would be obvious: every Congressman would spend as much as he possibly could in a quest to get more for his district from the federal government than his district paid into the federal government. There would be no restraint on spending. He then said this is close to how Congress operates.

North admires this observation. "Today, the size of the federal deficit testifies to the accuracy of Davidson's hypothetical scenario."

In fact, North believes that Lake Wobegon economics has advanced considerably and is certain to "bankrupt the West's national governments at some point."

Will voters call a halt?

This is the crux of North's article. He believes they will not. Each voter, you see, is intent on trying to get more than his or her "fair share" of welfare benefits. And therefore the system will perpetuate itself until collapse.

North points out that the welfare state, at least in the US, is nowhere near as pervasive as ordinarily portrayed. It is not nearly "womb to tomb," though it is characterized that way. Thus, people are constantly scrambling to try to figure out strategies to gain more "free money."

He uses Social Security as an example. Most people believe they will live longer than the statistical average and thus will benefit more than others. This certainty, no matter how ill-founded, undermines resistance to the system.

These two misperceptions go a long way toward explaining why people continue to tolerate the inefficiency and waste of welfare generally.

First, people do not understand that it is a monopoly service that cannot be changed for the better. The idea, perpetuated by politicians, is that better management can address and rectify issues associated with dysfunctional services.

The second misperception is that because people are forced to pay into welfare systems via taxes, they quite naturally wish to take back more than they have put in.

People often believe the problems associated with government services will be fixed … someday. And even if they aren't, people believe they are clever enough to "game" the system and emerge with compensation not granted to others.

Both of these assumptions are fallacies. The first is obvious and the second can be proven by the statistics of mortality. Most people won't "beat the system."

In order to preserve one's estate and make it grow, people need to accept that the parts of their income that go to supporting the system are in too many cases no longer of benefit to them.

To have a generous retirement and to help the next generation, people need to plan as if government services did not exist. They need to take "human action" to do what they can to plan AROUND government confiscation.

Certainly government services may exist, inefficient as they are, to be claimed in old age but in no way is this a certainty.

Those who look clearly at the West's current fiscal and monetary distress should be well aware that they need to count on their own resources for their future well-being and to help the next generations.

It's an uncomfortable truth, but one that ought to be internalized.