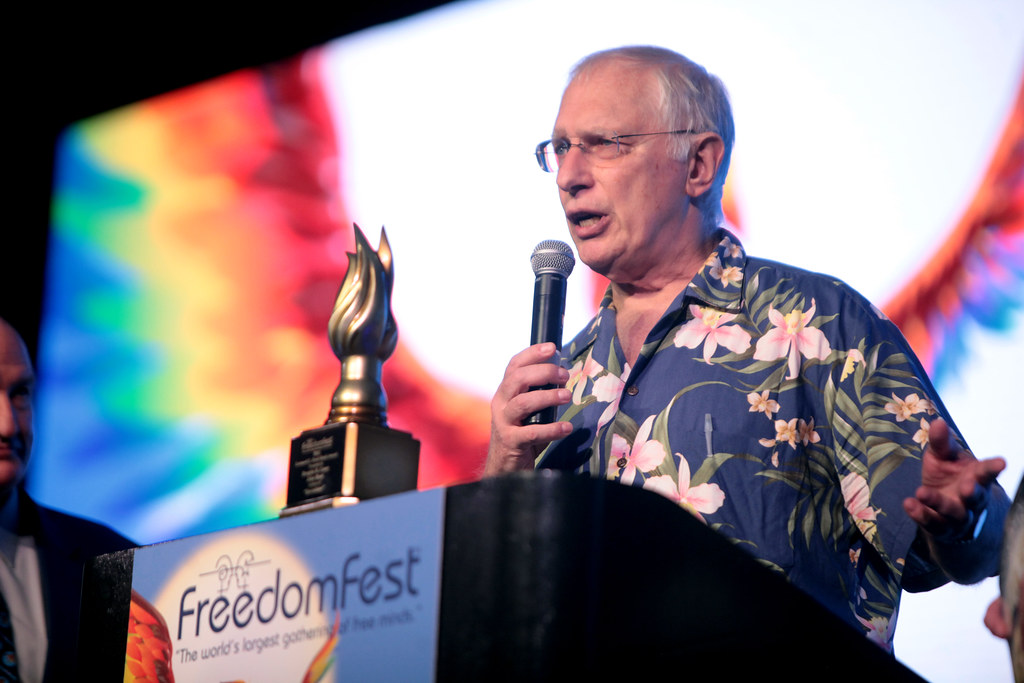 This episode of the podcast Smith Sense, is almost like a brief history of the 20th century.

Matt Smith hosts Doug Casey, and the two manage to boil down certain elements of what brought us to where we are today, as Doug says, to “the moral corruption of society.”

Doug Casey, for anyway unfamiliar, is a writer and speculator– an anarcho-capitalist influenced by Ayn Rand.

Matt Smith is the CEO of Royalty Exchange, a company which provides investments in music and other intellectual property, for instance by selling royalty catalogs of Eminem’s music.

In regards to the economic cliff America is teetering on the edge of, Doug Casey says America’s attitude is that:

The Fed will print up new money and make it good. This is part of the moral corruption of society, where nobody has to take any responsibility for anything, from the little things to the big things, because the ‘Great White Father’ the cornucopia in Washington will kiss everything and make it better.

This isn’t just a monetary and economic disaster we’re looking at. It’s actually a moral disaster as well.

It’s like this safety first culture has permeated everything. All the way from bicycle helmets, to bailing out the airlines so that they don’t go bankrupt, to anything else you could imagine. It’s like any short term injury is seen as the ultimate evil that must be avoided at all costs.

Doug talks about the first time he heard the term “politically correct” which was back in the day on Saturday Night Live. It was a joke that you would have to watch what you say, for fear of political repercussions. He points out it’s not so different from “politically unreliable” as the Soviets used to say.

We’re actually confronting the degradation of Western Civilization itself. This is much more serious than the Greater Depression, that we have definitely embarked upon. Humpty Dumpty has fallen off the wall… Look, the world is going to be very very different, in the next few years. Assuming even we don’t have something resembling WorldWar III. Which is entirely possible.

One of the things that dawned on me in the early stages of this, you could see this virus making its way across the world. You could see it coming. You could see that there were going to be implications… it doesn’t even matter how serious the virus actually is… you could see the effect it was having as it was making waves through the different countries it was going through.

From China, welding people into their apartments, to Italy completely going on lockdown, and overrunning hospitals. You could see it coming. And I remember in the midst of that, before it really got here in any great extent, Kim Jung Un launched a couple of missile.

And I thought wow, you could see how that could explode, to try and distract his own people, or you know, you could just see all these, it’s like a tinderbox, lots of little things could happen for their own internal, political reasons, could strike out and lead to much larger conflict.

Matt talks about a struggle between needing reform, and the sad reality that too often bad systems are replaced with something worse:

The total loss of faith in institutions, that they are demonstrably incompetent, and that nobody believes in them anymore, and so they get flushed away. And I think in that flushing away there is an opportunity, because they need to be flushed away, right? Because they are so corrupt, and flawed.

But it’s also frightening what might come in replacing it.

They also talk about gold, bitcoin, voluntarism, state governments standing up against the Feds, and the good habit of disobeying bad laws.

It’s really a great episode, and I encourage you to listen to the entire thing.

I’ve had the pleasure of learning from Matt Smith on a few occasions, at an entrepreneurship camp he co-founded.

He is one of a handful of people whose opinions and perspective I respect most in the world. Not just because of his business success, but also because of his philosophy on life.

His podcast is a must-listen for any value creators.