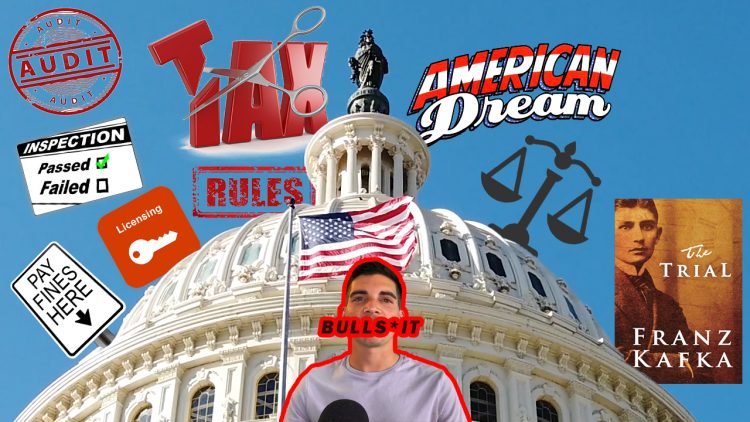 STAFF NEWS & ANALYSIS, Videos
Escaping a System That Traps You in Bureaucracy
By Joe Jarvis - May 14, 2021

The Trial, by Franz Kafka takes the reader on a trippy, Tim Burton style trek through the bureaucratic nightmare of court proceedings.

The accused protagonist K never even learns what he is accused of. Many of the lower judges and investigators have no idea either.

K even feels sympathy for some of these low level bureaucrats, who he accidentally gets in trouble by complaining about their corruption. When K witnesses the guards who first arrested him being punished, he says he doesn’t “even consider them guilty; it’s the organization that’s guilty, it’s the high officials who are guilty.”

At first K brushes off the trial. He says he is only even attending the hearings to humor the court. But by engaging with them, he realizes that “he had suffered defeat only because he had sought to do battle. If he stayed home and led his normal life he was infinitely superior to any of these people…”

As an intelligent, successful young banker, K is sure he will be able to clear his name, and in the process even set the court system straight. He gives a number of judges a piece of his mind, telling them what he thinks of their whole kangaroo court.

This, he later finds, is a mistake. As another character explains, “almost every defendant, even the most simple-minded among them, starts thinking up suggestions for improvement from the moment the trial starts, and in doing so often wastes time and energy which would be better spent in other ways.”

The trial drags on, with K never really knowing when he will be called to another hearing, or visited at his home or office by officials. Slowly he is drawn into the process and can think of little else.

Worry over the case consumes him. K can no longer do his job properly, or think of anything but preparing a defense. He must prove his innocence, without even knowing what he is allegedly guilty of.

At one point he meets a businessman who has been on trial for five years. The businessman tells K that his business has suffered immensely, “not only from a withdrawal of funds, but even more from the withdrawal of my energy. If you’re trying to work on your trial, you have little time for anything else.”

Desperately K searches for ways to get away from the system– “not how to influence the trial, but how to break out of it, how to get around it, how to live outside the trial. Surely that possibility existed…”

And from personal experience, I know its common to go through these stages of frustration when confronted with the Kafka-esque bureaucracy.

We’re expected to comply with thousands of pages of laws, and ignorance of the law is no excuse for breaking one– unless of course, you’re a police officer, who despite being an enforcer of the law, is protected by qualified immunity if he unwittingly violates your rights.

Tax law is the same way.

If you try to work for yourself or start your own business, better get a four year accounting degree first, because you’ll be expected to know and comply with all the special taxes, withholding, filing dates, forms, licensing, and everything else that applies to your particular business.

If you mess up, too bad, you are fined. No grace period, no new-business leniency. And say goodbye to your time and productivity if you are audited.

It’s enough to make you not even bother, better to stay an employee. But even employees have to file their own taxes at their own expense, and supply the government with all sorts of documents to be unreasonably searched and seized at the government’s whim.

Plus, it’s getting harder to just get a job without the Kafka experience.

For example, in the 1950s about 5% of US workers were required to have an occupational license, compared to almost a quarter of workers today. About 1,100 jobs now require government licensing to keep us safe from unqualified hair braiders, florists, interior designers, and travel agents.

Can you imagine how unsafe it is to receive a dozen tulips instead of daffodils, or find that the couch clashes with the drapes?!

That clues you into the real reason the bureaucracy grows– protectionism.

And this all hurts the poorest people, just getting started, the most. They can never pull themselves up by the bootstraps, because of the hurdles the bureaucracy places in the way.

I mean, we are supposed to believe that requiring an ID to vote is racist, because apparently it is really difficult for racial minorities to acquire an ID.

But having to comply with 1,000 steps to start a business– which aren’t even given to you in a nice checklist– isn’t that disenfranchising the poorest people?

Most people will never even try to start a business, or work on a big project that would require coming into contact with, and navigating the government bureaucracy.

My great grandmother found herself constantly making food for her husband’s friends and business associates. So she started charging them money for the food, which slowly morphed into her own restaurant out of the home kitchen.

Later she expanded to an actual establishment. THAT’s the American dream that was available to your average Italian immigrant back in the 1950s.

But the bureaucracy has taken out the middle rungs, so you have to skip right to the costly step of taking out a loan, complying with the licensing, and hoping you have enough customers to keep the business afloat.

But there is some encouraging news.

Apps like Uber and Airbnb have normalized not having to beg permission to chauffeur strangers, or rent them a room. There are now more obscure apps that allow you to book a meal in a stranger’s home– getting back to the dream of starting a small scale restaurant without having to dive into the deep end.

Wyoming, North Dakota, Utah, and Maine have all recently strengthened food freedom laws to clarify that people do not need licenses and health certificates in order to sell home baked goods directly to customers.

These, of course, are great developments– but they almost tempt you to fall into the trap of trying to improve the system, which as Kafka says, “often wastes time and energy which would be better spent in other ways,” for instance, on actually engaging in productive business and trade.

Instead, Kafka hints at a better solution when he says, “he had suffered defeat only because he had sought to do battle.”

Don’t ask permission. Don’t try to reform the laws. Just do it. And get a little creative if you have to.

Yes, the government will publicize cases of health coaches who are shut down for having no nutritionist license. And they will from time to time set up stings to catch unlicensed plumbers.

But these are really a minority of cases. Whatever fine or punishment you get in the end may be no worse than the original cost of complying.

Obviously, you’ll have to make your own calculation for your own particular circumstances. I do believe practicing surgery without a license will carry a more severe punishment than unlicensed dog grooming.

But plenty of people fly below the radar and never have to comply with the bureaucracy. And if at some point you make it big and find it impossible to continue without going legit– well now you have the money and the customer base to support the business expansion. It’s much less of a financial risk.

Or if you get really big, like Uber, and upset an entire industry– you might never have to go legit. You might start the new normal, sans the bureaucracy.

As usual, you probably want to be subtle about your operation.

You might run into trouble opening a full-fledged speakeasy to the public. But starting a club with membership fees which offers alcoholic beverages to the members… that’s more of a gray area.

Maybe instead of selling hard cider out of your basement, you charge for classes on how to brew hard cider– and each student gets to take home a completed batch, just like the one they helped create.

Some farmers can’t sell you meat without USDA approval. But they can sell you a whole cow, and agree to feed it and pasture it until you’re ready to have it butchered. At that point they will butcher your cow for you, and deliver you the meat, or a portion of the meat.

I’ve seen at community markets people offer their goods for a “suggested donation”. I don’t know if this would pass a legal test, but it seems to be working, and at very least you could plead ignorance and get off with a slap on the wrist in a worst case scenario.

Whenever you see a need or a problem to be solved, don’t think first about all the Kafka-esque hurdles required to legally offer a solution in a product or a service. Think instead about a creative way to offer that service, and cover your ass at the same time.

Teaching classes, building a community club, sharing expertise, and creating a marketplace or platform shouldn’t usually require licenses if you are careful with the words you use to sell it.

And of course most of this applies equally or better to internet based businesses, if your vision isn’t local.

But perhaps most important about all this is normalizing once again the individual right to do business. This is all just a way of demanding the very basic freedom to contract and transact with other consenting adults as we see fit, without the intervention of a third party– i.e. the government– which has nothing to do with the situation.

Your biggest threat is being turned in by a neighbor, or by a competitor. That’s a matter of living in the right place, associating with the right people, and building a culture that shames snitches who run to the Gestapo, instead of shaming upstart entrepreneurs trying to get a leg up in life.

Remember, most of us commit a felony everyday before breakfast. There are more rules than we are able to comply with, so generally there is no point in going out of your way to make sure you comply with the mountains of rules.

Just like in The Trial, the Kafka-esque experience is the result of runaway, self-replicating bureaucracy, which develops a mind of its own with no one steering the ship.

You start to realize, maybe no one is checking on you. Maybe they don’t have as much power as they make us think. They certainly do have limited resources.

So do your part to strain the system until it breaks, by helping to build the free economy that will inevitably replace it.