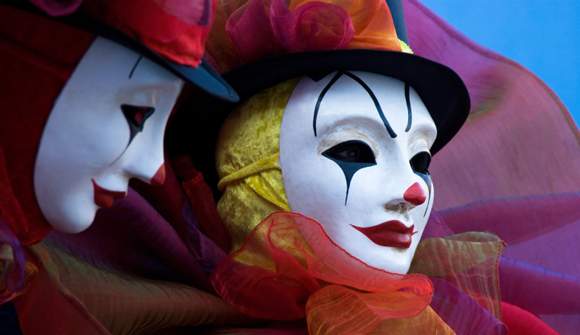 FACEBOOK'S ZUCKERBERG PAID RECORD $2.2 BILLION … Facebook chief Mark Zuckerberg set a new record for corporate compensation in 2012 with a package worth more than $2.278 billion, according to a survey by a corporate governance firm. The report by GMI Ratings showed Zuckerberg's salary of $503,000 and bonus of $266,000 were eclipsed by stock options worth some $2.27 billion. This was the first year the survey found any chief executive collected more than $1 billion, according to the GMI report released Tuesday. – Sydney Morning Herald/AFP

Free-Market Analysis: Facebook is an example of how corporate America has gone off the proverbial tracks. It is, unfortunately, a powerful signifier about how finance works in the 21st century, in the West anyway.

It surely holds various lessons for investors. For speculators, identifying a company early like Facebook, Google or Microsoft can be invaluable.

But there are other lessons having to do with the affiliations of companies such as Facebook and Google. These companies have been directly identified as being entangled with US Intel and there are certainly suspicions about Microsoft as well. Despite certain agonized denials, the NSA scandals have shown clearly how closely Silicon Valley works with the US government.

Zuckerberg's success at Facebook may not have been preordained but certainly it was no accident. There's no doubt various educational tracking systems identify intelligent youngsters.

We've pointed out several times that Lady Gaga, the founders of Google and Zuckerberg himself all ended up going to the same summer school for gifted children, though presumably at different times.

Once identified, these children can be steered through the maze of primary school and higher education … and then provided necessary resources if they show signs of fulfilling their promise. This was one of the reasons for George Bush's "No Child Left Behind" program. More aptly, it might be titled, "No Child Left Untested."

The sticking point is who is sponsoring these brilliant children and providing resources to them when they grow up. In Facebook's case, there is clear monetary evidence linking Facebook to the CIA and other Intel outfits.

There is a dark side to the success story that's been spreading across the blogosphere. A complex but riveting Big Brother-type conspiracy theory which links Facebook to the CIA and the US Department of Defence.

The CIA is …using a Facebook group to recruit staff for its very sexy sounding National Clandestine Service.

Checking out the job ads does require a Facebook login, so if you haven't joined the site – or are worried that CIA spooks will start following you home from work -check them out on the agency's own site.

The story starts once Facebook founder Mark Zuckerberg had launched … Facebook's first round of venture capital funding ($US500,000) came from former Paypal CEO Peter Thiel. Author of anti-multicultural tome 'The Diversity Myth', he is also on the board of radical conservative group VanguardPAC.

The second round of funding into Facebook ($US12.7 million) came from venture capital firm Accel Partners. Its manager James Breyer was formerly chairman of the National Venture Capital Association, and served on the board with Gilman Louie, CEO of In-Q-Tel, a venture capital firm established by the Central Intelligence Agency in 1999. One of the company's key areas of expertise are in "data mining technologies".

Breyer also served on the board of R&D firm BBN Technologies, which was one of those companies responsible for the rise of the internet.

Dr Anita Jones joined the firm, which included Gilman Louie. She had also served on the In-Q-Tel's board, and had been director of Defence Research and Engineering for the US Department of Defence.

She was also an adviser to the Secretary of Defence and overseeing the Defence Advanced Research Projects Agency (DARPA), which is responsible for high-tech, high-end development.

… Wikipedia's IAO page says: "the IAO has the stated mission to gather as much information as possible about everyone, in a centralised location, for easy perusal by the United States government, including (though not limited to) internet activity, credit card purchase histories, airline ticket purchases, car rentals, medical records, educational transcripts, driver's licenses, utility bills, tax returns, and any other available data.".

Not surprisingly, the backlash from civil libertarians led to a Congressional investigation into DARPA's activity, the Information Awareness Office lost its funding.

Now the internet conspiracy theorists are citing Facebook as the IAO's new mask.

Facebook's own Terms of use state: "by posting Member Content to any part of the Web site, you automatically grant, and you represent and warrant that you have the right to grant, to facebook an irrevocable, perpetual, non-exclusive, transferable, fully paid, worldwide license to use, copy, perform, display, reformat, translate, excerpt and distribute such information and content and to prepare derivative works of, or incorpoate into other works, such information and content, and to grant and authorise sublicenses of the foregoing.

Nothing has really changed with Facebook. It's still the same odd business, pilfering information from its users to resell or trade with others. When company officials were making public statements about 800 million users, SEC filings revealed 400 million users, and even that number was probably exaggerated.

And recently we read this about Facebook, posted at Wired and entitled "Facebook Is Trying to Buy Its Way Into the Developing World" …

Facebook just plunked down a reported $100 million to $200 million to buy a company that trims smartphone bills. And there's a good reason for that: The social network needs new users, and those users are increasingly cash strapped.

At a time when new U.S. users are drying up and saturation in other developed markets is on the horizon, Facebook is increasingly prioritizing emerging markets to fuel growth. It's a tricky gambit, given the paucity of online and commercial infrastructure in such markets, and one that could take years to pay off. But Facebook could reap the spoils of being a pioneer, among the first to tackle a challenge that other large internet companies, Twitter foremost among them, will soon be grappling with themselves.

Israel-based Onavo said it is being acquired by Facebook, giving Facebook a suite of apps for reducing mobile data usage via compression (not to mention its first Israeli satellite office, in Tel Aviv). Trimming smartphone bills is particularly important for users in developing countries, and Onavo is Facebook's second big play for such users in as many months, the other being its Internet.org initiative to wire the developing world.

"We … hope to play a critical role in reaching one of Internet.org's most significant goals — using data more efficiently so that more people around the world can connect and share," Onavo CEO Guy Rosen says in a blog post.

Such a goal may sound generous, but Facebook's motives are hardly altruistic: The company needs the developing world in order to grow.

Certainly Zuckerberg, like Bill Gates, is both smart and ruthless. But it's a strange kind of company, and its success is strange, as well. We note, of course, the same phenomenon regarding Google and a handful of other tech companies.

Capitalism in the 21st century in the US – in the West generally – is more mercantilistic than ever. A successful company, legally entangled with fedgov within the context of regulations, taxes, security valuations and central bank money stimulation is nothing like a free agent. Its top men are not the masters of their own destiny. There are "others" involved and competing agendas.

This has been going on not just for years but for more than a century. Immediately after the Civil War, various elements of modern mercantilism began to be introduced into the US. Great federal scandals blew up and such extremes of wealth became evident that Mark Twain labeled the age as "gilded."

JP Morgan was perhaps the greatest tycoon of the gilded age, controlling supposedly up to one-third of the revenue of the United States at his peak. These sorts of astonishing feats of wealth gathering were made possible by a kind of breakdown in the social order. After the war, high finance and securitization became the predominant power.

The problem worsened with limited liability corporations and then with the advent of the Fed and legal tender laws. Today, successful corporations are enabled by judicial fiat to grow as large as small countries. And if the support of the US government is leveraged as well, there is no telling how powerful such an entity can grow.

But it is not good for the body politic. It's not good for the larger society, either. The same income disparities that we recently covered in Switzerland are far more entrenched in the West and certainly in the US. Here's more from the initial article:

"In the more than ten years that GMI has been publishing this report, I've never seen a top ten highest paid list that loomed this large," said Greg Ruel, author of the report. "While the companies in this year's list have performed well over the past three and five year periods in terms of shareholder return, generally speaking, it's the sheer size and volume of equity awards granted to these top executives that catapults their total compensation to astronomical levels."

The massive compensation packages are generally due to stock awards, often in the form of options which allow a CEO to buy shares at a fixed price and cash in on gains. GMI said Zuckerberg exercised 60 million stock options, granted in 2005 and fully vested by 2010, at a strike price of just six cents. When Facebook went public in May 2012, Zuckerberg's worth vaulted by more than $2.7 billion dollars on the difference.

"Lest anyone think these are merely paper profits, readers may recall that Mr. Zuckerberg immediately liquidated more than $1 billion worth of shares at the company's IPO," the GMI report said. "The second largest form of compensation for Mr. Zuckerberg was perquisites totaling about $1.2 million, including personal use of company aircraft during 2012 for him and guests as well as security costs."

There are supposedly 90 million people out of work in the United States and families apparently make on average about US$50,000 a year. People are not generally envious and tend to be worried more about their own prospects than others. But when a nation's elite continually polarizes society in terms of resources and prospects, a dangerous destabilization can occur over time.

At some point, all the money that has been printed and all the price inflation that has been delayed will begin to have an impact. Some people will have grown tremendously wealthy by then but others will suffer inordinately in the wake of a crack-up that seems increasingly inevitable.

Zuckerberg is merely a sign of the times. But what is going on now is not necessarily healthy for society and sooner or later there may be unpleasant ramifications on a variety of levels.