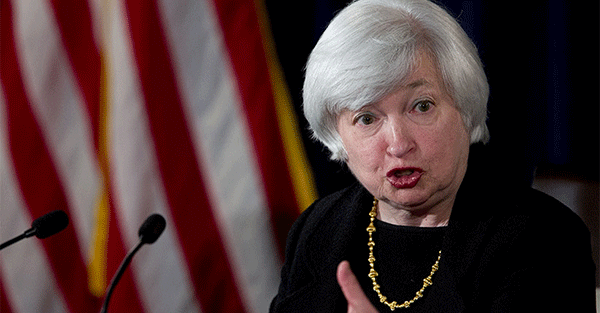 STAFF NEWS & ANALYSIS
From Fed to Farce as Yellen Continues to Pitch a Rate Hike
By Daily Bell Staff - June 07, 2016

3 Signs of a Recession Janet Yellen Is Ignoring … The Fed Chair’s upbeat speech glossed over key warning signs. Federal Reserve Chair Janet Yellen was upbeat on Monday in a speech at The World Affairs Council, where she largely dismissed the negative implications of Friday’s jobs report, which showed that the U.S. economy added just 38,000 new jobs, the worst monthly reading in nearly six years.  -Fortune

We wrote an article some time after Yellen’s appointment as Federal Reserve Chairman that suggested she’d been elevated to her current position in order to take the blame for the coming worldwide economic implosion.

We see no reason to change our mind.

Increasingly, the signs of disaster become clearer. And Yellen, meanwhile, looks like she doesn’t know what she’s talking about.

(Not that she ever did.)

More and more, she sounds like an equity pitchman. Of course, the Fed is nothing like what it is portrayed to be. But in the past it’s been less obvious.

Late last year she was positive the US economy was “recovering.”

Then she hiked rates by a mere 25 basis points and world stock markets imploded.

She never apologized of course, and the mainstream media gave her a pass.

But it was obvious she’d been wrong, disastrously so.

Now it is June – mid year – and Yellen has begun to talk up a rate hike again.

It was supposed to happen later in June after a meeting of the Federal Open Market Committee.

Now even the mainstream media cannot keep up the pretense.

This Fortune magazine article (see excerpt above) is a good example.

It points out that the rate of job creation is falling. “Businesses are not firing many people, but they’ve also cut back significantly on hiring and other expenditures.”

Capital investment is down as well. “The decline in companies’ willingness to invest in people is matched by its lack of interest in investing in new capital equipment.”

Payroll data shows a slowing economy. So does data from the Institute for Supply Management. This data, released Friday, “showed the growth in the services sector slowing in May, with the employment component falling into contractionary territory.”

There is no sign, here, of an impending “boom.” Not even the tiniest sniff.

Meanwhile, it becomes increasingly obvious that one of Yellen’s main goals is to sustain stock market growth, at least for now.

Presumably until after presidential elections.

Conversely, she is to ensure that the dollar doesn’t move down too hard and too quickly against gold.

Yellen is fighting a losing battle in this regard. The world is at the end of a long fiat-money expansion driven by zero interest rates.

That’s the reason for less-than-zero interest rates and speculation  about a cashless global society.

Stocks are going down. Gold is going up.

The world and the US especially are more likely to face stagflation than  a further economic boom.

Central banks themselves are buying gold.

Billionaires like George Soros and Carl Icahn are taking positions in gold and gold derivatives.

Gold miners are moving up.

And there are predictions of significant catastrophe worldwide from people like Soros’s former partner Jim Rogers.

Rogers recently gave an interview in which he said that sovereign debt was insupportable and sooner or later there would be a catastrophic collapse that would wipe out whole nations.

He predicted, for instance, the end of the UK as a viable entity.

The mainstream is beginning to mention warning signs that Yellen is glossing over.

But the real economic situation worldwide is a good deal worse than anything the mainstream media is currently describing.

The reality of what’s taken place is clear enough. There is no recovery nor will there be. Not in the US. Not in Europe. Not in Japan or China.

Conclusion: Bet on stocks if you want in the short term. But in the medium- and long-term, precious metals will continue to appreciate. This is part of a much larger business cycle. This should be clear to Yellen. But at this point, she’s more of a pitchman than an economist or Fed Chairman.